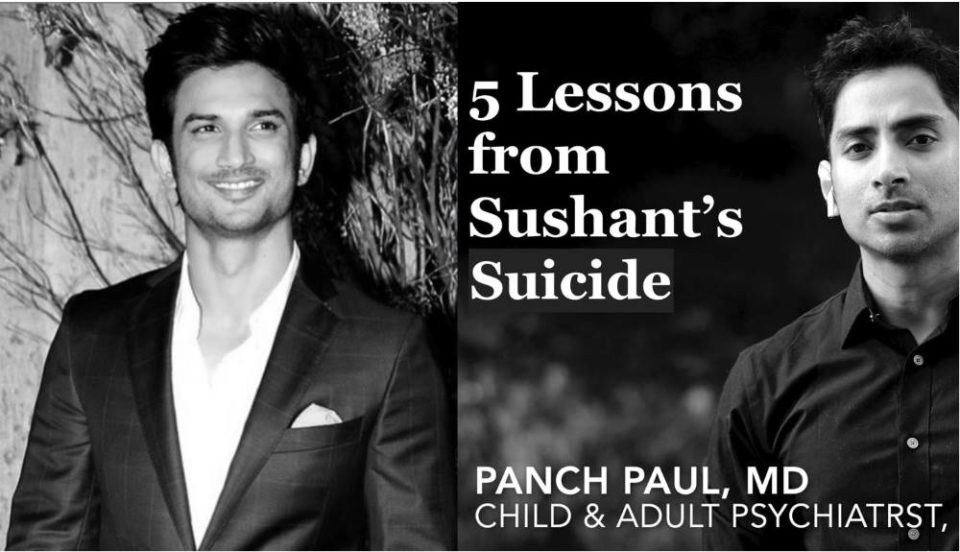 Sushant Singh Rajput- a very, talented Bollywood actor committed suicide last month. The news has shocked and upset many. The media has reported that Sushant was dealing with multiple stressors related to work, relationships, isolation, and was depressed. As a psychiatrist, I see around five suicidal patients daily, and have treated more than 1000 suicidal cases over the last five years. Following Sushant’s death, I have been asked many questions about the nature of depression and suicide. Here I will discuss five common issues related to depression and suicide.

People can feel sad and depressed from time to time, but these emotions do not persist. But when someone suffers from a depressive disorder- the problems continue for weeks and months. Depression is one of the symptoms of Major Depressive disorder, which is a severe mental illness. When some have a major depressive disorder, in addition to sadness, people lose interest in the things they used to enjoy in the past. For example, they may stop watching television, going out, stop caring about their looks and hygiene, persevere about adverse events in the past, feel hopeless, helpless, and worthless. Besides, they may have a reduced appetite, reduced sleep, reduced motivation, and decreased energy. The most severe consequence of depressive disorder is suicidal thoughts, and many people attempt suicide and die every year. Many with the depressive disorder do not acknowledge that they are depressed. Hence, it becomes essential to understand the other associated symptoms, which provides an indirect clue to their state of mind.

Many are perplexed why a smart, intelligent, talented, successful, handsome, and popular star like Sushant took this extreme step. Mental illness, like physical illness, can affect anyone. In today’s world, there is a lot of stress across all ages. I see children as young as seven years old who have attempted suicide. Depression can strike any age group and can be as lethal for the young as well as the old.

Similarly, highly intelligent people are as susceptible to mental illness as others. Being smart means that you have a higher IQ, which you can use to pursue what you want. Intelligence is a tool that helps us get what we want. So, when highly intelligent people become sad and depressed, it is even more dangerous. Once they decide to commit suicide, they do thorough research, and their suicidal attempt is fatal.

Thirdly, being rich beyond a certain point, cannot bring any more happiness when all your needs are met. However, money can have health advantages as it gives one access to the healthiest food, best treatment, safer living conditions, and a healthier lifestyle. However, stress can adversely affect rich and poor alike.

Lastly, Sushant was a popular role model and had millions of followers. However, popularity in social media is a two-way sword. It can open up many opportunities through increased exposure. But at the same time, it takes away a lot of leisure time otherwise spent with close friends and family. When in the middle of a crisis, if we need to talk to someone, millions of followers cannot help. Sushant called two people before suicide that night but could not reach them. To make matters worse, the social isolation due to the Coronavirus quarantine has increased the stress, anxiety, and depression for many patients

The brain is like any other organ of the body, like the heart, lungs, and kidney. People worry more about heart attack, stroke, cancer, and Corona. But mental illness can be as severe and as lethal as a physical illness. Among young people, suicide and mental illness are among the top causes of death worldwide. And we should give equal importance to our emotional health as we offer to our physical health. And there is good news. As people can recover from a physical illness like diabetes, hypertension, asthma, and heart attack, similarly, they can also recover from mental illness like depression and anxiety. However, there remains a stigma surrounding mental illness, for which people are still shy to seek help freely as they seek advice for physical problems.

Suicide is never the answer to any problem. However, when stress becomes overwhelming in people with a risk of mental illness, emotional pain can become unbearable. Some think that only emotionally week people commit suicide. It is a dangerous myth and associates the stigma of emotional weakness with mental illness. Sushant was a successful student, successful actor, a brilliant person who made a name for himself in Bollywood being an outsider. If someone has a heart attack or cancer, we will not say that he was physically week. I get to see patients who survive a suicide attempt. In those cases, fortunately, something happened, and the suicide attempt failed. Sometimes the rope breaks; sometimes, a person will overdose pills and survive in the hospital, sometimes they cut their wrist and survive with blood transfusion.  But more than 80 percent people regret making the suicidal attempt. Once they see how their family and friends are concerned and love them, they feel grateful to have survived. Unfortunately, many do not survive their suicide attempt. If Sushant were alive today, he surely would have appreciated how people have shown love and care for him. The lesson for all of us is to recognize the problems early on and ensure that our loved ones or we get timely help.

The psychiatric treatment has two main components. Therapy or counseling when you discuss your emotional challenges with a therapist understand their origin and learn coping skills.  And the second component is medications, which helps to correct any chemical imbalance in the brain. It is reported that Sushant stopped seeing his psychiatrist and stopped his psychiatric drugs. When it comes to mental illness, many people stop taking their treatment when they start feeling better, and sometimes when their condition becomes worse. Some psychiatric medications are addictive, and to stop them suddenly will make it worse. Once someone starts getting better and achieves recovery from their mental problems, they can come off their medications. But it should be done slowly and gradually, under the care of a psychiatrist. In my practice, I try to use fewer drugs and have helped many people come off their medications.

Finally, Sushant’s death is a wakeup call for all of us. There are many factors related to Sushant’s death, like nepotism, favoritism, exploitation, and the stressful work environment in the Bollywood industry. I hope his death will serve a positive catalyst and bring meaningful changes. Also, I hope that this will raise more awareness on the dangers of mental illness and encourage those with mental sufferings to seek help. To learn more about managing stress naturally, one can read my book ‘Stress Rescue’ available on Amazon.

*Dr. Panchajanya ‘Panch’ Paul, MD, ABIHM, ABPN, FAPA – is triple Board certified – Child, Adult, and Holistic Psychiatrist; and a Fellow of the American Psychiatric Association. Panch Paul is the medical director of the Southern Live Oak Wellness, and Atlanta Recovery Center. Dr. Paul holds an adjunct faculty position at Emory University, University of Georgia, and the University of Central Florida. He has authored several articles, research, and two books – Stress Rescue and Sleep Coaching available at Amazon. To schedule an appointment with Dr.Paul – call 678-250-8883 or email panchpaulmd@gmail.com.

ICE: Foreign students must leave the US if classes go fully online

How to rescue memory