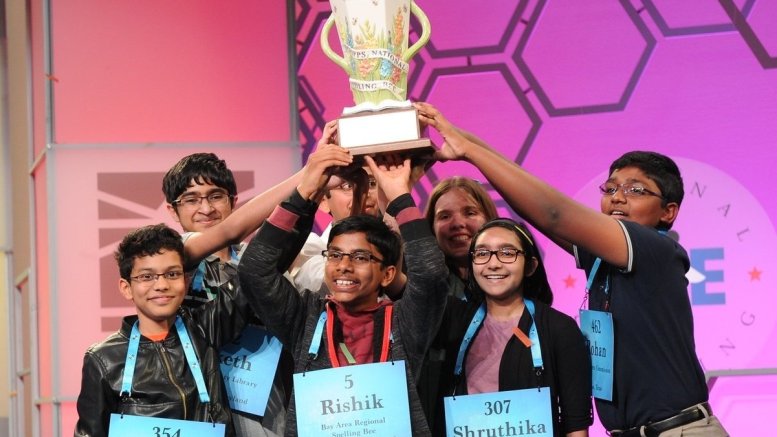 New York, May 31 (IANS) Seven Indian-origin kids, along with an American, have been declared co-champions of the US National Spelling Bee after the tie among the eight couldn’t be broken even after 20 rounds of the finals.

The unprecedented decision to declare eight co-champions was taken Thursday night after the organisers ran out of their selection of difficult words to challenge them further.

The 10-year monopoly of Indian-origin children was finally broken with a non-Indian girl from Alabama, Erin Howard, becoming a co-champion.

The winners, who will each get $50,000 and a trophy, were the last ones standing from among the 562 contestants drawn from across the US and abroad.

The national level contest held in a Washington suburb is broadcast nationally on the sports channel ESPN, giving it the aura of a major sports event and a big audience. The contest is sponsored by the media company, EW Scripps.

The Spelling Bee opens in school and the winners go on to contests at the next levels and those champions go to the national competition, along with some who meet other criterion for selection.

The Spelling Bee is open to students in eighth grade and below.

In addition to children from all the 50 US states, students also participate from the Bahamas, Canada, Germany, Ghana, Jamaica, Japan and South Korea.

The 94-year-old contest has evolved to be a test of not just memorisation but also of a broad understanding of linguistics and etymology such as the origin of words and how words from classical languages are transmuted into English and how words are borrowed between modern languages.

Since Balu Natarajan won the Spelling Bee in 1985, Indian-origin children have been winners in 19 years, continuously for ten years from 2008 to 2018.

Indian-origin children do well in the Spelling Bee because the Indian community prizes participation in it and several community groups and businesses organise competitions for children within the community.