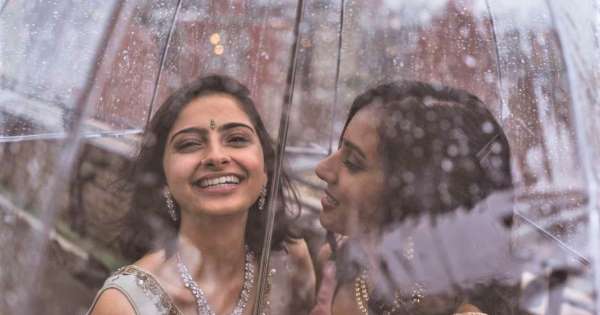 New Delhi, Aug 1 (IANS) A photoshoot of a Hindu-Muslim same-sex couple, hailing from India and Pakistan respectively, has gone viral on social media and netizens are going gaga over their pictures.

The pictures of the couple, currently based out of New York, were shared by their photographer Sarowar Ahmed on Twitter with a caption: “A New York Love Story”.

Pictures show Anjali Chakra from India and Sundas Malik from Pakistan wearing traditional outfits and laughing and kissing under a rain-splattered umbrella.

The post has collected 48,000 likes and hundreds of comments.

The pictures won the Internet and netizens applauded the couple for breaking the barriers of gender and religion.

“Love, heart and feelings has no religion or bounderies. You guys are awesome. Keep going. God bless you both,” said another.

In another post, the photographer wished the couple “happy anniversary” while sharing more pictures of them. Anjali Chakra also shared the images with a caption, tweeting: “Happy anniversary to the girl who taught me how to love & be loved.”

Sundas Malik, who is a Pakistan-based artist, shared the couple’s special moments on Instagram with a post saying: “I grew up witnessing and watching different kinds of love, some in my family and some in Bollywood. After I got a little older and realized what my sexuality was, I never saw representation of people who looked like me. I’m so glad I have the opportunity to be that with the love of my life…”