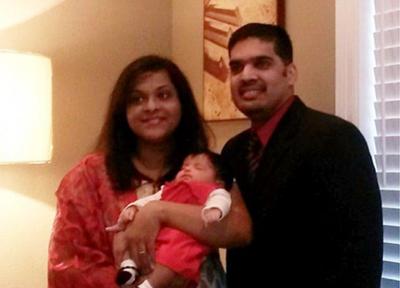 Atlanta, GA, September 5, 2019: Wesley Mathews, the adoptive father of three-year-old Indian girl Sherin who was convicted of her death, was denied a motion for a new trial Thursday morning.

Mathews’ lawyers filed a motion for a new trial in August, arguing that “photographs of the remains of the decedent, both where her body was discovered and in the autopsy suite” were prejudicial, and that the jury should never have been shown those photos, reports NBC News.

Mathews’ defense team is expected to file an appeal.

Mathews, who was charged with capital murder, had in June pleaded guilty to a lesser charge of injury to a child by omission. He is currently serving a life sentence and will not be eligible for parole until 2047.

Sherin Mathews reportedly suffered several broken bones since coming to the US and had failed to thrive, according to testimony provided by medical professionals. Evidence of alleged abuse she suffered at the hands of her foster father, acting alone or with the help of her foster mother Sini, were to the jury in the punishment phase.

Mathews and his wife Sini adopted the girl in June 2016 from Bihar. Sherin Mathews disappeared on October 7, 2017, and her foster father initially told the police that he had sent her out in the wee hours of the morning as punishment for not drinking her milk.

His wife Sini was reportedly sleeping at the time of the incident. She was previously charged with child endangerment for allegedly leaving the girl alone in the kitchen on the evening of October 6, 2017, while she, Wesley and their biological daughter, went out to dinner.

The charge against Sini Mathews was dropped in March and she was released from the Dallas County Jail.

he Mathews’ parental rights over their biological daughter were terminated in January 2018.