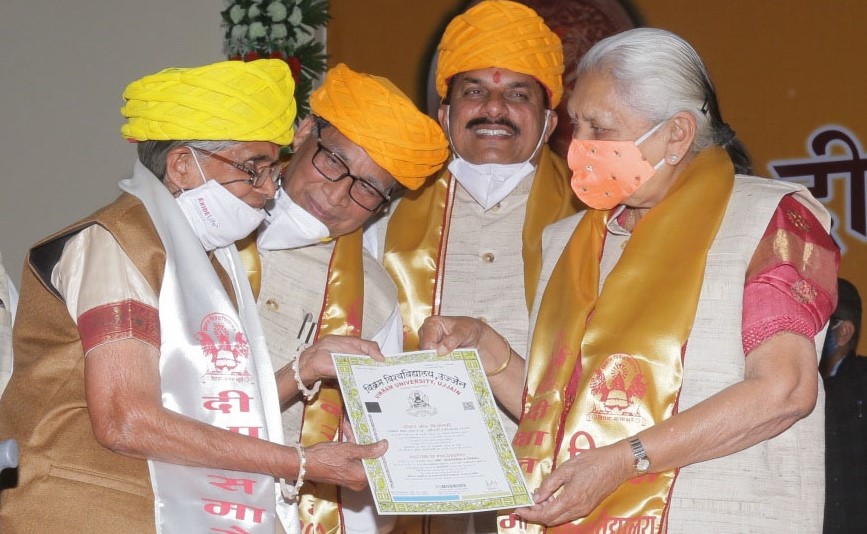 Ujjain, Feb 23 (IANS) There is a saying that there is no age barrier for reading and learning that a person can continue to learn and grow throughout life. This adage has come true for Sasikala Rawal of Ujjain, who has been awarded a PhD in Sanskrit at the ripe age of 80. She received her degree after retiring from the education department as a lecturer.

Sasikala Rawal, a resident of Ujjain, retired from the state government’s education department as a lecturer. She had completed her MA in Astrology from 2009 to 2011. She did not stop here and continued pursuing her studies and thought of doing a PhD in Varahamihira’s astrological treatise ‘Brihat Samhita’ in Sanskrit. She successfully completed her Ph.D in 2019.

Sasikala earned the degree of Doctor of Philosophy on the subject ‘Social life as seen through the mirror of Brihat Samhita,’ under the guidance of Mithila Prasad Tripathi, former Vice-Chancellor of Maharishi Panini University. While awarding the degree to Sasikala, Uttar Pradesh Governor Anandiben Patel was pleasantly surprised and praised her courage.

When asked that why she chose to study at an age most people want to rest, she said she has always been interested in astrology and because of her passion, she took admission in MA studies in astrology started by Vikram University . After this, she wanted to pursue further studies so she read Varahamihira’s ‘Brihat Samhita’ and thought of doing her doctorate in it.

She said that her thinking has received a different direction from reading astrology. Astrology has such importance in life similar to taking help of maps by which we reach closer to our destination. We can face challenges by reading the signs of astrology.

Rawal said it is easier to navigate life if you assess the types of challenges in life in advance. She would like to use her knowledge in public interest, she adds.