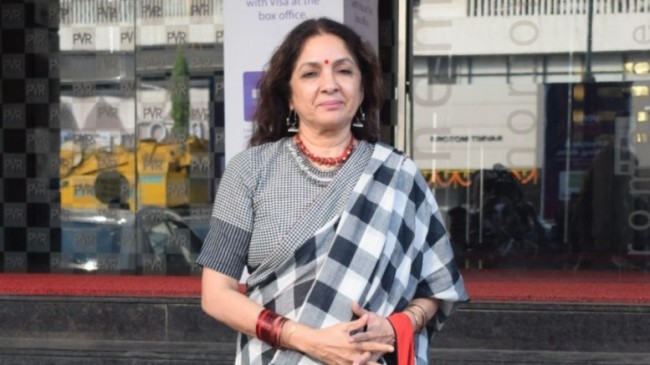 New Delhi, Dec 24 (IANS) Age and medium is no bar for talent — and in 2018, Indian showbiz paved the way for senior actors to return to the limelight. Neena Gupta, 59, turned out to be the perfect example.

Neena, who became a household name after portraying an iconic role in the 1990s TV show “Saans”, was away from the screen for a long time. Last year, she took to social media to ask for work.

“I live in Mumbai and am working. I’m a good actor looking for good parts to play,” she wrote on Instagram, raising a pertinent question about the lack of screen space for older actors.

But who would have known that the actress, who was asking for work till last year, would shine bright with films like “Mulk” and “Badhaai Ho”. And that’s how the fortunes turned.

While Neena played a mother of two grown-up sons who accidentally gets pregnant, Surekha Sikri essayed a nagging but affable grandmother and Gajraj Rao was seen in the role of a caring husband and father.

In an interview to IANS, Neena urged people from society and industry not to give heed to an actress’ age. She hopes for more roles for women of age on-screen.

“There are not many roles. I always say that, ‘After a certain age, what is a woman’s role? Taking care of the family and home. After that there is no role’. When the society will change, I think we would have more roles on-screen,” she said.

As for Surekha and Gajraj, they won the audience’s heart with their funny and quirky performances in the film, which showed that for viewers what matters the most is good acting irrespective of an actor’s age.

Surekha made her debut in 1978 with political drama “Kissa Kursi Ka”, and made a name for herself by working in films, theatre and television. After featuring in the “Balika Vadhu” TV show, she gained huge popularity as the stern Dadisa. Now, once again she has wooed her fans with her character of the nagging grandma in “Badhaai Ho”.

At 73, she does not want to settle down. She says she has no plan to slow down or retire.

“Retirement? Hello, I don’t even know that word. What does it mean? That’s a very old-fashioned English concept… That you do something and then you retire – and mostly it applies to government servants. Fortunately, I am a freelancer and I don’t have any wish or desire to retire. I can just go on and on,” Surekha contended.

Gajraj, who managed to make the audience fall in love with him, has earlier featured in movies like “Bandit Queen”, “Hazaaron Khwaishein Aisi” and “Talvar”. But it was “Badhaai Ho” which brought him more visibility than ever. He is glad character actors are finally getting their due.

“I think such change is coming in cinema because of the lead actors like Ayushmann, Varun Dhawan, Ranbir Kapoor, Ranveer Singh, Rajkummar Rao… They are secure enough to be part of films where they allow writers and directors to give space to the character actors.

“There is no insecurity on things like the lead actor should have the best dialogues and all the footage in the film. Therefore, though these actors are crowd-pullers in the theatre, actors like us also finding our space,” he said.

The year 2018 also saw another film titled “102 Not Out”, which proved that “old is gold”. It starred legendary actors Amitabh Bachchan and Rishi Kapoor in pivotal roles.

In the film Big B plays a 102-year-old man, father to a 75-year-old character played by Rishi. The film revolves around the father’s aim of breaking the record for being the world’s oldest person, a title held by a Chinese man. The duo’s performance won praise from the audience.

Not only in “102 Not out”, both Rishi and Amitabh garnered love from their fans for their performances in movies like “Mulk” and “Thugs of Hindostan” respectively.

“Thugs…” turned out to be a box office dud, but the stunts pulled off by Amitabh at the age of 76, projected how many senior actors can tell the youngsters, “Bbuddah… hoga terra baap”.