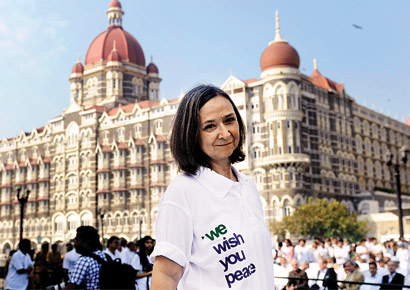 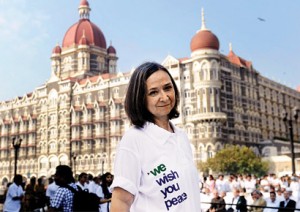 Mumbai, Nov 24:  “I say, let the terror fade and let the light of love shine through all what we do on a daily basis &hellip.” That’s the measured response of an American woman, Kia Scherr, who lost her husband Alan, 58, and only daughter, 13-year old Naomi, in the Nov 26, 2008, Mumbai terror attack.
Alan Scherr and Naomi were dining in a restaurant in the Hotel Oberoi Trident that fateful night when a couple of heavily armed Pakistani terrorists indiscriminately rained bullets on the people. The terrorists were part of the 10-strong group which had sneaked into Mumbai earlier that evening through the Arabian Sea route and created mayhem in the city for 60 hours, killing 166 and injuring around 300.
Alan and Naomi were in India as part of a meditation group with Synchronicity Foundation for Modern Spirituality (SFMS) to introduce hi-tech meditation to Mumbai.
“I feel we can best honor the memory of those who lost their lives by rising from the ashes of darkness and loving like extremists. That means forgiveness, compassion, understanding, collaborating to increase the ‘Peace Index’ by strengthening the pillars of peace through partnership with education, business and government,” Scherr told IANS on her annual visit to Mumbai through the One Life Alliance (OLA) of which she is a prominent activist.
Making it a point to return to India every year around the 26/11 anniversary, she campaigns to expand and bring more people together into the circle of love and peace.
Scherr admits it’s going to be a long journey. “But then, all journeys are, and people, even the victims of a mindless attack or a holocaust, have to get along and move ahead in their lives with love, tenderness and empathy,” she explains in a calm voice.
With this objective, she keeps coming to India. This time, she will be here for at least six months and administer pledges to people from different walks of life, including children in schools run by the BrihanMumbai Municipal Corporation (BMC).
Founded by Charles Cannon, OLA is a small group of people affected by the 26/11 attack who spread the message of peace, love and compassion among people, communities and children.
They had publicly forgiven the terrorists for the carnage, because, as Scherr emphasised, “life is meant to be lived in harmony”.
“We ask the children to take a pledge a day which can be as simple as just smiling, being polite and showing consideration for fellow beings, or even looking at the world with wonder and amazement. The children are the future and inculcating love and empathy is easy for them to achieve as the world and life is like a miracle for them,” Scherr said.
Daily for a month, a new pledge is added and Scherr says that people who do it find their lives changed, become more sublime and and beautiful.
The OLA has collaborated with nearly a dozen schools in Mumbai, Meerut and Chennai and with institutions like Tata Institute of Social Sciences, Tab Cabs, Wellness Springs Mental Health in Kalyan (Thane), in slums and in Muslim pockets.
Through OLA, Scherr is also working on similar efforts with a couple of people in Pakistan through the good offices of Amineh Hoti, director, Dialogue and Action, to create the first inter-faith academic course in that country.
“She (Hoti) has invited me to write a chapter for her textbook on the Dignity of Differences. I am also working with an NGO that trains teachers of underprivileged children and runs a school for rag-picker kids,” she said.
Communicating through Skype, the NGO has included peace education in their programmes using Scherr’s peace education tools that outline 30 ways to respect the dignity of life.
Scherr is also working with two people from Rwanda and some businessmen in Mexico City, while a couple of schools in the US have also started using the peace programme.
To a question whether the world will become a safe place in the future, Scherr says it is best to focus on what is possible in the face of what the reality is.
“We can always do better. We can look at the gaps in security, look at what does not work and try a new approach as we increase technology to blend with improved relations with each other and among countries,” Scherr concludes with a smile.
Earlier this year, a live action film entitled “A Letter to a Terrorist”, directed by Atlanta based filmmaker Parthiban Shanmugam featuring Kia Scherr, was banned by the Tehrik I Taliban Pakistan after organizers were about to show the film at The Children’s Society in Lahore. Produced by Shanmugam’s Vennila Films, the film contains a reading of an actual letter written to Ajmal Kasab, the lone surviving terrorist before he was executed on November 21, 2012. The film premiered on May 19th at the Cannes Film Festival. It was also shown at the International Youth Festival in Rio where it was given an historic third screening and viewed by Pope Francis, who said after that he “appreciated the message.” The film was selected for the 10th annual Indian Film Festival, which took place from July 17th to 21st in the German city of Stuttgart.

India ahead of US, China as best investment destination: Ernst & Young