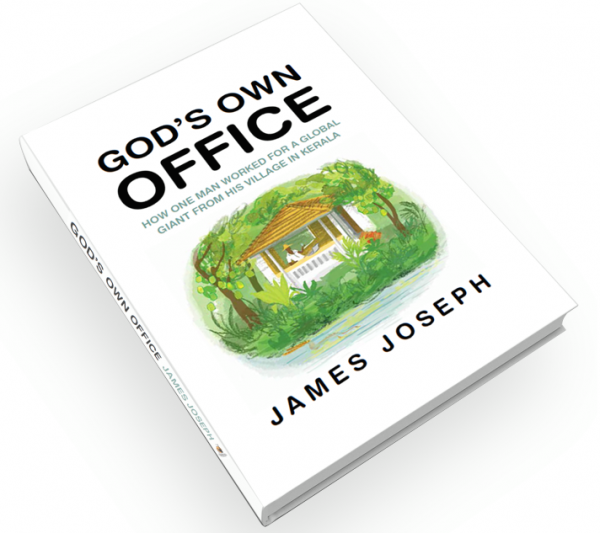 The introduction to ‘God’s Own Office’ begins with three-year-old Joseph returning home from church, only to realize that something is wrong. “I started shouting at everyone around me. How come all of you didn’t bring my mother back from the church, she is alone there. Go get my mother! All the villagers grew teary-eyed. I was three years old when my mother died of cancer. Thirty-five years later, I walked on stage at the Philips Arena in Atlanta in front of 14,000 employees from around the world to receive Microsoft’s highest award from the CEO, Steve Ballmer. Many professionals my age have similar success stories to narrate, except that I made the trip to receive the award from the same soil where I made a whole village cry all those years ago. 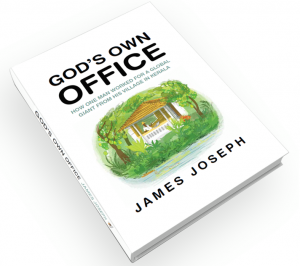 Book: God’s Own Office: How One Man Worked for a Global Giant from His Village in Kerala
Author: James Joseph
Available at Amazon
Hard copies can be ordered online to be delivered in the US at  http://www.indulekha.com/gods-own-office-business-james-joseph

There is probably some coincidence between the 11th Pravasi Bharatiya Divas (with its focus on NRIs in the Gulf) held in 2013 in Kochi and the call for NRIs to return home , in the form of a book published by James Joseph from Aluva near Kochi. The book, entitled “God’s Own Office” was released on October 2nd this year, timed during the birth anniversary of one ofIndia’s greatest RNRIs -Mahatma Gandhi.

According to the book’s author, James Joseph, Kris Gopalakrishnan Executive Vice Chairman of Infosys, Thomas Friedman, New York Times columnist and Pulitzer Prize winner, and Indian columnist Anil Dharkar have been instrumental in encouraging him to write down his global experience and decision to eventually relocate to his origins in Kerala. Says Joseph of the writing opportunity that was the first of its kind for a person with no background in writing, “We can do what we want if we notice the opportunities that are passing by us. What started out as the memoirs of a jackfruit plant, written aboard flight trips to and from business meetings, turned into a first person account of my experience.” 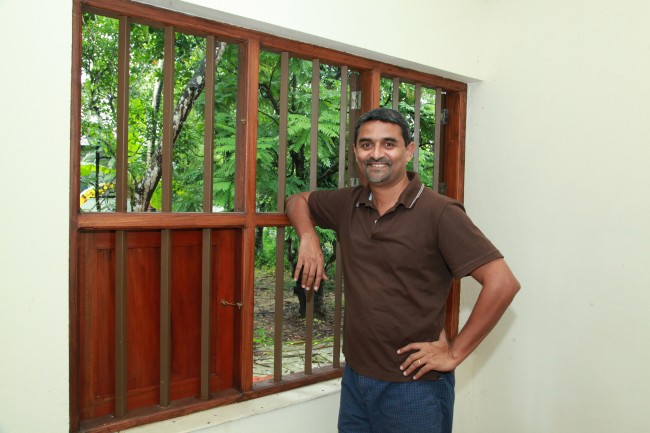 James Joseph, a recipient of the Circle of Excellence award, the highest award for sales and marketing employees at Microsoft, came to India as the Director, Executive Engagement at Microsoft for a period of five years before moving on to found his own company called Jackfruit 365, the fruit for which he is also the brand ambassador. A degree in mechanical engineering from Thiruvananthapuram and a masters in engineering business management from University of Warwick, UK, as well as nearly two decades of sales and marketing experience in North America, Europe and India put Joseph on a self proclaimed road map of high profile NRIs returning to their roots to taste more than material success.

In Joseph’s case, his daughter’s lament over the inability to consume the delicious Jackfruit all year around led to a literal sowing of the seeds of entrepreneurship. Joseph converted the ample wastage of jackfruit into a freeze and store for 365 days to use product. His ingenuity for creativity, passion for local/native resources and desire to remain close to his origins led to what he calls a social venture. He says, “Our motto is Buy 1, Save 1, Give 5. A customer who buys a 180 gram packet of Jackfruit, saves the entire fruit from wastage and the proceeds go to Akshayapatra, an NGO that supplies mid-day meals to schools in several states, to feed five children.”

Joseph’s book ‘God’s Own Office’ is part memoir and part rhetoric – an appeal to the youth to look for opportunities within the place they grew up. It attempts to persuade NRIs to return home to their native land. Joseph’s journey is testimony to the powerful will and unconditional family support to surmount obstacles and build on a dream. It is also a wake up call to the future, of not only the state Joseph lives in, but also the entire country -of a generation of aged left behind, of resources untapped, of the severing of ties with the familiar from childhood, of identities undergoing transmogrification in alien lands.

“My daughter said once on a rainy day that it was better to watch the hungry birds of Periyar than play angry birds,” laughs Joseph. Periyar is the largest river in Kerala and Aluva is located at the mouth of the river. The entertaining moods of the river coupled with local monuments, a fifteen acre farm, community engagement in the form of membership in school and religious institution create a hectic life, Joseph’s own work commitments and travel not withstanding.

For this interview, Joseph agrees that a disclaimer that relocation must not entail loss of professional livelihood, is a must. He urges the need for families to find an energy spot where every member can draw strength from. His own story being somewhat unusual, he believes that it is not impossible for people to seriously consider relocating to their native state/village but also work from home.

‘God’s Own Office’ is an honest step by step account of the author’s life, his foray into the global world and the eventual return to his humble beginnings. Joseph explains that the beauty and awe he found the world over, he also found in his backyard. Coming home, in a sense, also involves reliving a childhood through the eyes and experiences of his children.