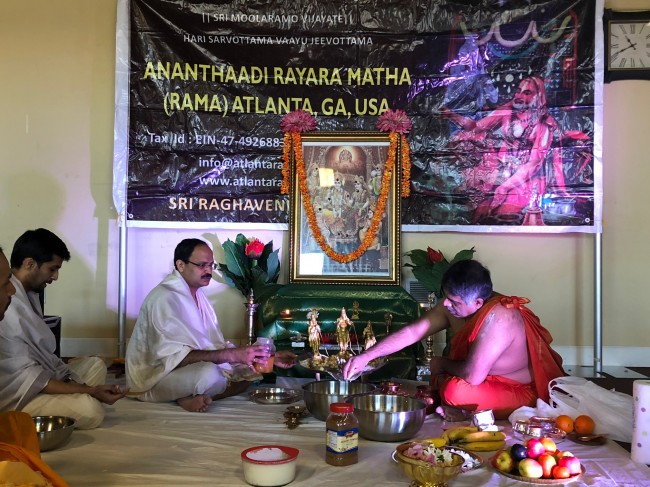 A spellbinding, soothing chanting of Shri Rama Charitra Manjari by the devotees reverberated in the temple hall. The pooja rituals were performed through 1 pm and Panchamruta was handed to all devotees to perform Abhishekam to the divine. Everyone received blessings and offering (prasad) after the rituals.

The Ananthaadi Rayara Matha, a nonprofit organization which is yet to find a dwelling of its own, has been hosting various festivals and events at temples acrossAtlantasince 2015.

“Our mission is to facilitate worship services similar to Rayara Matha in Mantralaya, India- perform religious activities such as daily and special pooja, discourse and apara karma,” said Pradeep Vittalmurthy, Chair of Trustees. “We also have a mission to raise funds to acquire and develop Rayara Matha with staff quarters, multi-purpose hall and meditation center for devotees.”

Raghavendra Swamy, fondly known as Rayaru is said to be one of the most revered gurus of Dwaita philosophy. The Saint of Manthralaya attained Samadhi, a state where a person goes to a mental trance through meditation in Mantralayam, the present-day Kurnool of Andhra Pradesh.  Rayaru is said to have assured his disciples that he will be with them in spirit for 700 years. Rayaru is worshipped in the form of Brindavana (samadhi) or mruttika Brundavana scattered over three southern states and across the country. His Aradhana Day falls on Sravana Bahula Dwithiya and is celebrated across the world by his devotees inIndia,USA,UK,Singapore, andMalaysia.

It is widely believed that Rayaru takes his lineage from Sanku Karna to Prahalada to Balheeka Raja to Vyasaraya to Sri Rayaru. It is also believed that when Lakshmi Narasimha offered to give him mukthi during his Prahalada avatara, he had refused it, expressing his desire to bring in hundreds and thousands of devotes for mukthi. Thus as Sri Raghavendra, even today he is believed to grant the desires of his devotees and alleviates their sufferings, without compromising on the imminent need to take his devotee on the path of mukthi. 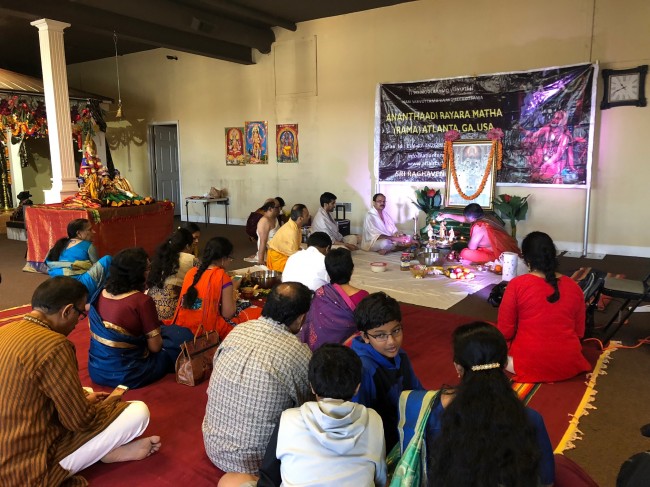 Rayaru is popular among all sects of people – irrespective of caste, creed or color. It is not only Sriman Moola Rama’s/his guru’s blessings alone but also his erudite scholarship in Vedanta, Sastra, Purana and ithihasas. His extra ordinary wisdom was demonstrated during his poorva Sharma days under Sri Sudheendra Theertha. As a young disciple, he could explain certain difficult postulate of Sriman Nyaya Sudha very lucidly and was rewarded with the title Sudha Parimalacharya by his Guru. His expertise and his wisdom in sashtras reflected in his 17 sub commentaries of Teeka of Sri Jayatheertha and other works like Rama Chartirya Manjaree.KrishnaCharitrya Manjaree. Despite his exemplary scholarship, he has always exhibited absolute humility and attributed all his merits to his guru, parama guru and his kula deva Sri Venkatachalapathi.

Ananthaadi Rayara Matha has several exciting events lined up for the devotees in their effort to raise funds for the temple including devotional concert of the very popular Sri. Vidyabushana in June 2018, Sri. Raghavendra Swamy Aaradhane in August /September 2018, and devotional concert for Sri. Putturu Narasimha Nayak September/October 2018.

“We are raising funds to achieve our dream of providing a peaceful place for worshipping Shri Laxmi Narasimha and Sri Raghavendra Swamy in Atlanta,” said Vittalamurthy. “To make this possible, we are raising funds in various ways. One of the ways is providing paaduka pooja services at the devotee’s place. We hope to build a magnificent Rayara Sannidhi Matha with daily rituals (Nithya Poojas) and prayers at the matha according to Agamas. We hope to provide Tirthaprasada after daily poojas, prayers on Hindu religious festival as well as special poojas, priest services at the matha and at devotee’s residence, Aparakarma services such as shraddha, pitrupaksha, regular cultural events to promote Hindu culture and heritage, Gurukulam classes for kids, youths and adults on a regular basis to inculcate Hindu religious values to our future generations.”