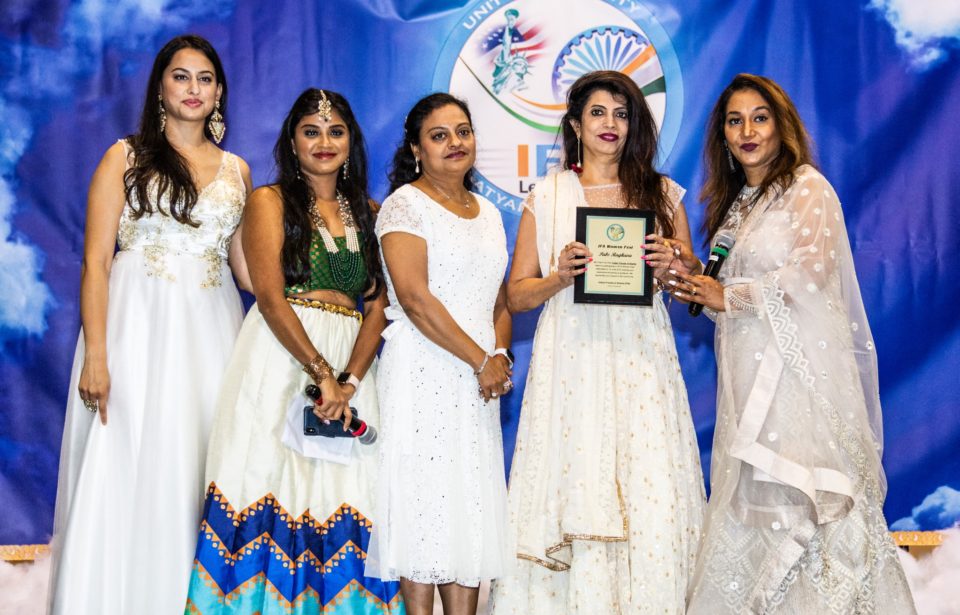 By Rakesh
Photos by Neelamegam Subramanian

Representatives from various Indian organizations were in attendance to support the event. The main objective of IFA’s Women’s Fest is to celebrate and recognize the year-round contribution and accomplishments of women in the community, to recognize the prominent women leaders in Atlanta and also afford women an opportunity to meet and greet, to forge new friendships and network with each other.

The first sect of fashion show focused on “The Positive Significance of Colors in our Lives.” Colors play a major role in bringing positivity and enrichment to our lives. This show emphasized on the beauty of those colors in a women’s life. The show was coordinated and Choreographed by:- Shubhra Singh, Priyanka Agarwal, and Hetal Mehta.  Models who executed the colorful show included Hetal Mehta, Anima Das, Anusha Reddy, Aparna Khanolkar Sheth, Bharti Khatri, Gauri Vyawahare, Meghna Naik, Priya Shrivastava, Shweta Shrivastava, Soujanya Negi, and Sukhleen Kaur.

The second fashion show “Angels” was directed by Madhuri Mayreddy, and touched everyone’s heart by reinforcing the beautiful message that Angels are all around us. They are in all ages, sizes, colors, and shapes and we need to just open our eyes and see. The show was executed by Moukthika Gottipati (kid), Adwitha Bharadwaj (kid), Tapasya Katta, Palini Sunkara, Aashna Kasireddy, Sparsha Pearl, Jennifer Rai, Sunanda Dhar, Pushyami Gottipati, Karishma Katara, Vishnudevi Seeni, and Madhuri Phanindra who all walked down the aisle in their majestic attires. Costume by Oitijhyo-The Tradition-Sarees and MUAs – Pradnya Kharat, Archana Kotekar, Sakshi Tandon Singla.   The Angels team thanked Bharti Molleti, Bandana Verma, Neelima Sundersen and Lakshmi Thesam.

With recent happenings in the community and many deaths related to health issues, IFA brought Dr. Susmita Parashar to educate our community ladies on how to identify the risk of cardiac arrest, precaution and handle.

Sheetal Desai presented how to be prepared for life after the unthinkable.

The raffle draw generated a lot of involvement and excitement from the crowd.  Prizes for Raffles included a ticket for Cancun, Mexico Getaway, provided generously by Kristen from Moonprep.com, and a Diamond ring provided by Legacy Jewels.  Delicious food was kindly provided by Chennai Express.

The esteemed guests in their brief remarks thanked and congratulated Indian Friends of Atlanta Organizers for making them part of the impressive Festival celebrating women.

IFA team expressed  special thanks to Meghna Nagarajan & Aishwarya Sridharan for anchoring the event.  It further thanked all the annual sponsors 27th Investments, Suvidha, Patel Brothers, cultural event participants, Fashion show teams, and all the enthusiastic attendees who made it to the event and made the festival a memorable one.