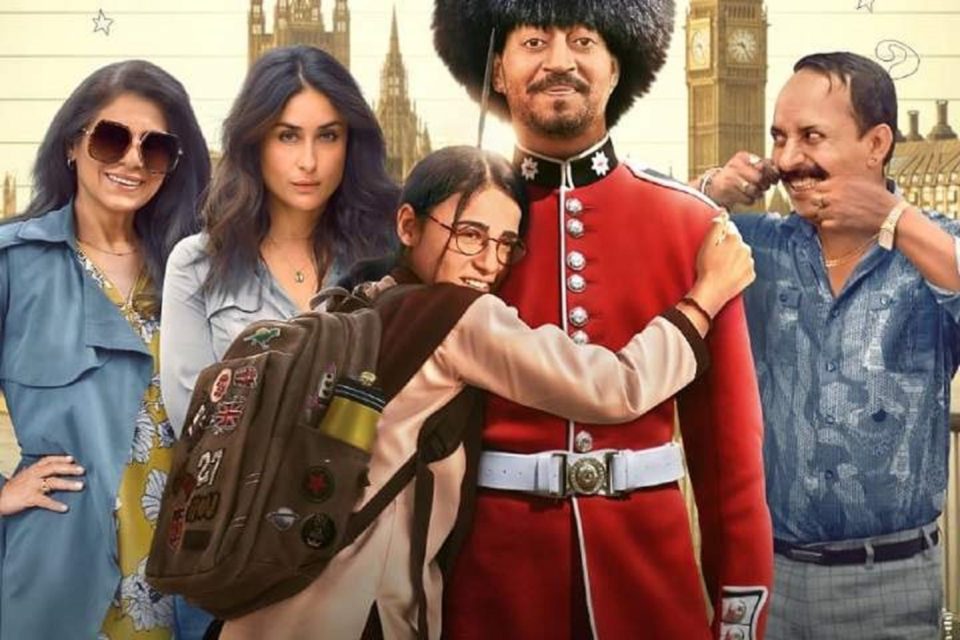 A couple of great performances can actually turn an utterly mediocre film into okay stuff, you realise watching Irrfan and Deepak Dobriyal in “Angrezi Medium”.

Homi Adajania’s follow-up to Saket Chaudhary’s 2017 comedy hit “Hindi Medium” is a standalone story that bears no link with the first film by way of plot or characters and is, quite frankly, not a patch on the original. There are the sporadic brilliant scenes and the random bursts of humour, but the overall storytelling simply falls short, faltering every now and then. It’s almost as if the writers were not quite sure how to push the narrative beyond a point, especially in the second half.

The film begins by introducing Irrfan as Champak Bansal, owner of one of two Ghasitaram sweet shops in the same locality of Udaipur — the other belonging to his brother Gopi (Deepak Dobriyal). The two brothers are normally busy bickering over whose shop represents the ‘real and original’ Ghasitaram brand. Champak is a single parent, taking care of his teenage daughter Tarika (Radhika Madan). The girl has a big dream. She wants to pursue higher studies at a top university in the United Kingdom.

The film tries setting up adequate drama using that premise, as the narrative moves from Udaipur to London. In the process, the story also tries creating space to talk of too many issues. There is the obvious theme of the young generation’s fetish for foreign universities, and the question of how expensive world-class education continues to be. The screenplay also talks of teen rebellion and generation gap. A cameo by Dimple Kapadia is used to highlight loneliness among the aged.

Somehow, all of these comments don’t add up to much, owing to weak writing. As the minutes pass, you sense the classic ‘Sequel Syndrome’ taking over — it is almost as if this film was made because the idea worked the first time, and it seemed lucrative enough for a second outing.

The urge to squeeze in too many sub plots and characters takes its toll as the film, after an engaging build-up in the first hour, meanders in the post-interval portion before reaching a rather insipid ending. What rescues the film from sinking are the three performances that matter. Irrfan, Deepak Dobriyal and Radhika Madan are first-rate.

Towering above all with a simply flawless performance, Irrfan proves once again why he will always be special for Bollywood buffs. He clearly relishes every bit of being Champak, bringing alive the nuances that define the goodnatured, smalltown businessman’s quirks with ease.

Perhaps his performance would have seemed incomplete without the comic-melodramatic chemistry he shares with Radhika Madan, as Champak’s daughter Tarika. “Angrezi Medium” is primarily a father-daughter story and Radhika matches Irrfan’s screen presence admirably to light up the screen in their scenes together.

Deepak Dobriyal is a delight to watch as ever — if only Bollywood had more imaginative roles for him than the hero’s sidekick. To his credit, Dobriyal finds a zillion ways to reinvent that stereotype, you realise watching him go in “Angrezi Medium”.

Pankaj Tripathi elicits a few laughs in a cameo, Kareena Kapoor was quite honestly never needed in this screenplay, and Dimple Kapadia could have done with a stronger role. Ranvir Shorey and Kiku Sharda bring alive their roles with innate talent.

What amazes you is that Adajania has employed a battery of four writers — Bhavesh Mandalia, Gaurav Shukla, Vinay Chhawall, Sara Bodinar — to come up with such an aimless script that offers utterly half-bakes characters to a cast that seemed awesome in the opening credits.

We would perhaps have ended saying “Angrezi Medium” is a good idea gone waste — except that as the storyline slips with every passing minute – you begin to wonder if there was an idea to begin with.

Coronavirus to peak in May-June outside China: Report