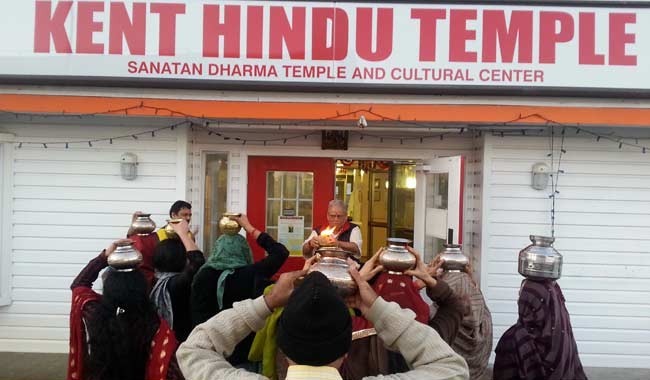 New York, Feb 28 (IANS) A Sanatan Dharam temple was vandalised in Washington state with windows broken and the word “Fear” painted on it, less than a fortnight after another temple was attacked.

Members of the the Sanatan Dharma Temple in Kent, about 30 km from Seattle, who came for worship Friday “were greeted by shards of broken glass after vandals targeted the building,” KING5-TV, a Seattle NBC affiliate, reported. According to the temple web site, “Amalaki Ekadashi” was to be observed Saturday.

Bricks were used to smash every window of the building and parts of the structure were ripped apart, said KOMO-TV, an ABC affiliate in Seattle. “The crime is small-minded with big intentions, shattering calm with hate,” the station’s reporter, John Humbert, said. “Silence isn’t the answer.”

Universal Society of Hinduism President Rajan Zed, said: “Hindus nationwide are highly concerned” by the second attack on a temple in recent days.

“It was shocking for the hard-working, harmonious and peaceful US Hindu community numbering about three million, who had made (a) lot of contribution to the nation and society, to receive such signals of hatred and anger.”

On February 15, the Hindu Temple Cultural Centre in Bothell city, about 35 km from Seattle, found a swastika painted on it and “Get Out” scrawled in large letters with spray paint. In the US, white supremacists have adopted the Nazi swastika as an ideological symbol.

The two temple attacks came after President Barack Obama’s criticism of India at an inter-religious prayer meeting earlier in February where he said intolerance there “would have shocked Gandhiji”.

Both temples do not have security cameras “and info on the vandals remains elusive,” KOMO-TV said. The incidents are under police investigation.

Several attacks on Hindu temples have taken place across the US in the last few months. In August a murti (idol) of Shiva at the Vishwa Bhavan Hindu Mandir in Monroe in the state of Georgia was desecrated with black paint. The local sheriff’s office arrested two people in connection with the attack.

Between July and October in Loudon County in Virginia, police have documented 17 separate incidents of anti-Hindu vandalism, the Hindu American Foundation said.

In a twist to the Kent incident, an Islamic organisation tried to deflect attention away from Hinduism, claiming that the attack was directed against Muslims, even though the building had a large sign, “Kent Hindu Temple.”

According to KOMO-TV, Arsalan Bukahari of the Washington Council on American-Islamic Relations said many of these acts of aggression target smaller religious groups that some bigots think are Muslim.

Leading US Christian fundamentalists have attacked Hinduism. Pat Robertson, who has called Hinduism “demonic,” criticised the practice of yoga this week.

While doing yoga, he said on the 700 Club TV programme, “you don’t know what the Hindu says, but actually it’s a prayer to a Hindu deity and so it sounds like gibberish.” Robertson is a pastor who was once a candidate for the Republican Party’s presidential nomination and has a following of millions.

Another Christian pastor, Franklin Graham, has denounced Hinduism as a “false religion” and said that “none of their 9,000 gods is going to lead me to salvation. We are fooling ourselves”.