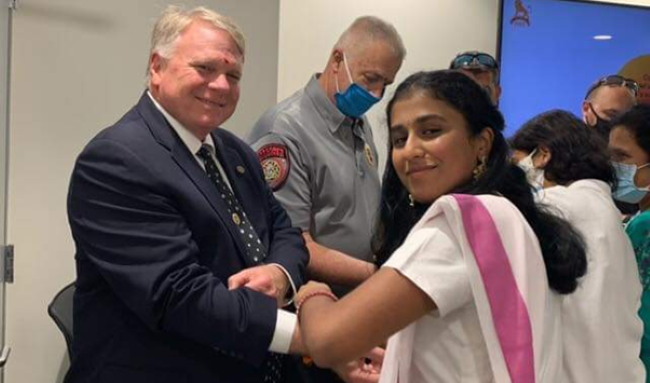 Atlanta, GA, October 15, 2021: Officers of Johns Creek PD, Alpharetta PD, Georgia Tech PD and officials at Governor Kemp’s office were recipients of a slice of Indian culture with festive threads of Rakhi tied around their wrists this Rakhi season by members of the Hindu Swayamsevak Sangh (HSS).

Embracing the core Hindu belief of “Vasudhaiva Kutumbakam,” which translates to “the entire world is one family,” HSS has been celebrating the festival of Rakhi as the “Universal Oneness Day”. In this light, Rakhi symbolizes the commitment to protect each other, the communities we are part of, and Dharma or righteousness. To mark this occasion, every year, various chapters of the HSS reach out to local civic bodies such as the fire and the police departments and the various elected officials and organize events to bring together the officers serving on the frontlines and the local Hindu community.

This year, GA state Representative for District 50 Ms. Angelika Kausche and Chief of John’s creek Police Department Mr. Mark Mitchell presided as chief guests for the August 24th event at the John’s creek civic center. Several Police officers along with them were present and were appraised of  HSS activities.  The event at Alpharetta on August 27th was graced by the presence of the mayor Mr. Jim Gilvin and concluded with a tour of the premises organized by the community outreach officers that saw enthusiastic participation especially from the younger participants in the audience.   At the Georgia State Governor’s office on September 14th, the president of HSS Georgia Mr. Ajay Houde tied Rakhi to the Governor’s policy advisor Mr. Austin Gibbons and his team. The volunteers introduced them to HSS and its work in the state.  The Georgia Tech event on September 29th also saw heavy participation and a flurry of enlightening questions on campus policing and community engagement from both sides of the dais.

“We were thrilled to be a part of the celebration,” said GT PD in their FB post.

During the ceremony, HSS members expressed their gratitude to the officers for their service and sacrifices by tying Rakhis onto the wrists of the officers. In a particularly solemn manner, as the Rakhi threads were being tied, both sides repeated in unison – “I protect you, you protect me, we both protect the society”. “These events have served to bring the Hindu community closer to the women and men charged with protecting them and to foster a platform for cultural understanding and open dialogue,” observes Shanker.

“What a wonderful celebration with wonderful members from our community! I could not be more honored to have been included,” said officer Amanda Clay, Alpharetta PD.

The GA chapter HSS members, organized four outreach events, which were attended by elected leadership, serving officers, as well as eager participants from the local Hindu community, replete with candid and insightful dialogues alongside sumptuous consumption of traditional Indian delicacies.

“We at Johns Creek PD were honored by our citizens and we take our charge to protect and serve this community to heart. We are truly Stronger together,” reads a FB release from JC PD.

The auspicious Indian festival of Rakshabandhan, occurs annually on the full moon day in the month of Shravan in the Hindu calendar. On this day, in a solemn ceremony, in the Hindu community worldwide, sisters tie a sacred thread, or Rakhi, to the wrist of their brothers who in turn re-affirm the duty to care for and protect their sibling. This festival revolves around a popular story of Lord Krishna flying a kite and injuring his finger. Draupadi, the wife of Pandavas had tied a piece of cloth, which she tore from her sari, on his finger to stop the bleeding. Krishna, who was moved by her gesture, promised to protect her from every evil.

Couple sentenced in Atlanta for laundering $500,000 on behalf of India-based phone scammers