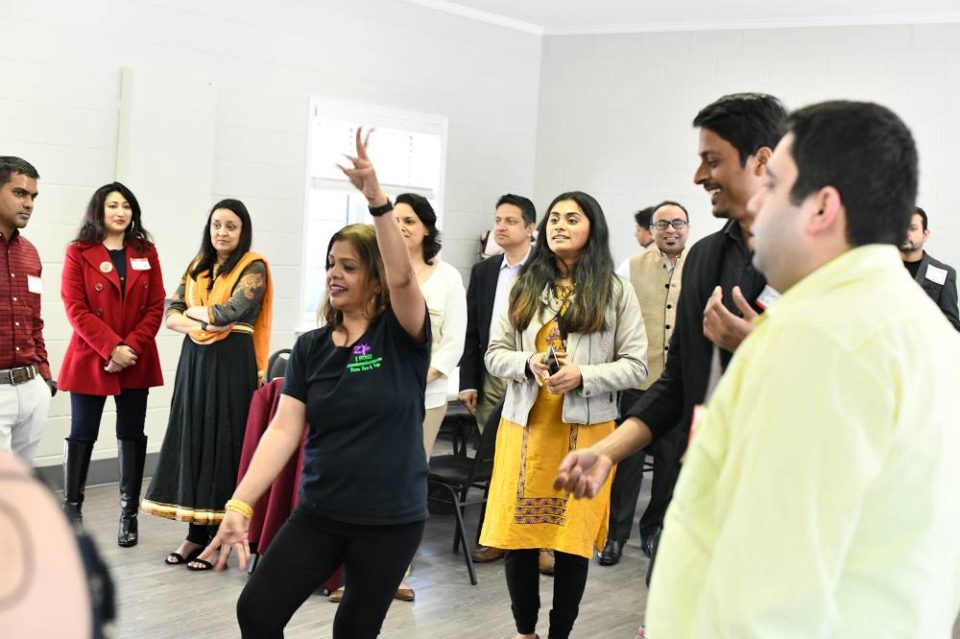 Atlanta, GA, March 4, 2020: On a crisp sunny Sunday afternoon, more than 70 singles gathered at Keswick Park Community center, Chamblee to mix and mingle and hopefully meet the match of their dreams.

The event on Sunday, 9th February was made possible by the tireless efforts of around 20 volunteers who are the backbone of Hindu Vivah’s Atlanta chapter. They work on a very tiny budget and helped by chipping in so that the event could be offered free to participants. But, based on feedback received, future events may have to be offered at a nominal charge to cover venue rental and ancillary expenses.

This was Atlanta Chapter’s 9th Hindu Vivah singles event in Atlanta, despite the chapter being fairly new. Its first event was held in April 2017 at Holiday Inn, Roswell, and followed by two more in 2017. The highlight of the February 2018 event, was that the singles who had met at the first event returned as newlyweds to share their stories and experience of Atlanta Hindu Vivah! They had fortunately just clicked at first sight, so they came to thank AHV for providing the forum to facilitate their special meeting. Encouraged by their success story and gauging the need for continuing such events, several more mixers were held in 2018 and 2019.

The event began with an ice-breaker, where Sheila Devlia and her team from Z Fitness Dance and Nutrition got the participants grooving to Bollywood and Latin numbers in Zumba style. The main introductory activity was group-wise speed dating. All the participants, who were identified by first name only, had been divided into groups according to age, starting with mid-20s all the way to over 50! Vivah events use the ‘round robin’ format whereby every woman briefly meets every man in her own group first and then moves on to the next age group. As an added benefit, the format of group speed-dating allowed people to meet and make friends with attendees of their own gender as well.

After the initial round came the social hour where participants informally mixed and mingled over delicious refreshments lovingly arranged by a dedicated volunteer. During the social hour, some participants paired off and went out for further chats. Those who stayed back enthusiastically participated in “Desi Chat”, an Indian version of the board game, “Taboo”. Before exiting, each attendee indicated to the volunteers the name of the ones whom they were interested in. Only when there was a match from both sides, contact information was shared with that pair.

Most of the participants were programmers, analysts, and engineers with a few doctors as well. People whose parents migrated from all corners of India showed up.  Participants themselves who had grown up in many different cities and countries, also attended. While most participants live in Atlanta, a few had flown in from other parts of US.

Increasingly popular and growing is the middle-aged or elderly group, widowed or divorced, empty-nesters or with grown up children off to college, now hoping to find a companion outside of their workplace or through bar-hopping. Many are prominent community members and were very glad that Hindu Vivah had taken this initiative and urged the organizers to widely publicize their events.

Hindu Vivah (www.hinduvivah.org) is a US based non-profit organization started in November of 2016 in Dallas, TX to facilitate the meeting of Hindu singles for the purpose of matrimony in a wholesome, structured, alcohol-free environment.  A second chapter was organized in Houston, TX, and Atlanta, GA is the third. Currently, there are chapters in Austin, TX, Washington DC, and Bay area, CA, Michigan and New York/New Jersey. Chapters can be established in other states where the Hindu community feels the need but it should be noted that starting one requires a very dedicated volunteer force.

These meets help break the ice and introduce Hindu singles to each other, at which point Hindu Vivah’s work is done, and the singles are left to decide what further steps they need to take in their search for a life partner. For the first time in Atlanta, volunteers were experimenting with facilitating a one-on-one meeting in a centrally located restaurant for the two-way matches.

Atlanta volunteers hope to organize 3 to 4 such events every year provided there is enough interest and more community leaders and sponsors come forth to help.

The next Atlanta event, for summer quarter, is being planned in May or June 2020. Please look out for announcements in local media or visit https://hinduvivah.org/atlanta-chapter/. To volunteer, or sponsor an event, please email: atlanta@hinduvivah.org.