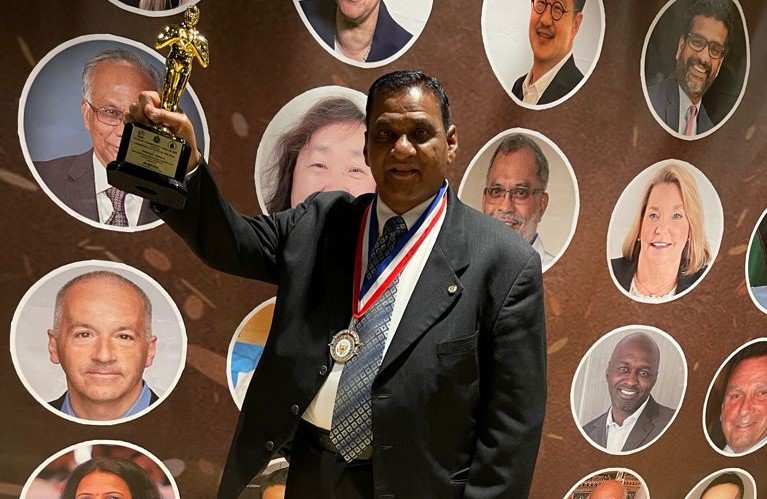 Atlanta, GA, October 29, 2021: Atlanta’s Mustafa Ajmeri was one among the 32 distinguished personalities who were honored at the 10th Annual Global Community Oscars on August 27, 2021 at the Yellow Box Auditorium in Naperville, IL by the 7th Congressional District’s Multi Ethnic Advisory Task Force (MEATF) and American Multi Ethnic Coalition (AMEC). Ajmeri was honored with the “Community Activist of the Year” award for “excelling in serving communities by leveraging leadership to empower and enlighten.”

Ajmeri was nominated for the award by Dr. Vijay Prabhakar, Founder, President, AMEC.

An all too familiar face in the Atlanta entertainment scene, Ajmeri, as CEO of Global Entertainment and Media Services, has spent a lifetime promoting Indian culture and entertainment in Atlanta, even as he has forged lifelong ties with hundreds in the community because of his generous availability to for a range of causes including his leadership in community events and projects that have served those in need.  Originally from Gujarat, India, Ajmeri lived in Chicago, and was actively involved in PR of weekly telecast of “Chitrahaar”, a popular TV show back in 1983. Considered a Cultural Ambassador of Atlanta, GA, Ajmeri has been an organizer for several musical shows, Bollywood and celebrity events, along with working with charitable organizations. An active Rotarian at the Rotary Club of Emory Druid Hill, he has been a recipient of several community awards. Atlanta in charge of India Tribune, Ajmeri is the go-to man ever-ready to help and serve.

U.S. Congressman Danny K Davis’s MEATF was established in 2010. The 7th Congressional district’s MEATF plays an important role in promoting and protecting minorities. The members of MEATF firmly believe that for Congressman Danny Davis, the inclusion and promotion of minorities is not a political Compulsion but a matter of deep faith.  AMEC is a bipartisan grass root level organization established to empower the ethnic communities of America through social, cultural, educational, healthcare, economic and political initiatives.