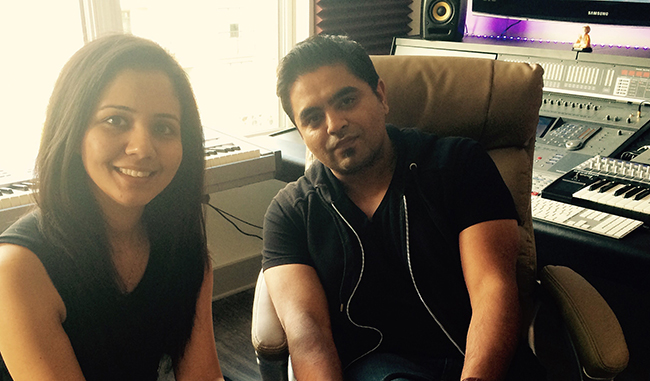 Atlanta, GA, Feb 4: Popular music producer Rishi Rich, who is responsible for launching British Asian talents like Jay Sean and Juggy D, recently released his new album “Dil Kya Kare (Did I Love You?)”, which has vocals by Atlanta’s own Swati Mishra.

The song released under ‘Universal Music Group India’ and features Bollywood actress Mallika Sherawat lip syncing to Swati’s voice. Since its release, the song has been in the top 20 charts on iTunes India and Saavn Radio and has garnered over 1.5 million hits on YouTube.

For Swati Mishra, her debut album is a life-long dream come true.

“I had met Rishi a few months after I emailed him some of my song links and one day he asked me to come over to his studio. He listened to some of my songs and really liked them,” says Swati. “I was humbled when he said my voice should be in movies.”

A few months after this meeting, Swati got a call from the producer to sing for his new album.

“It was surreal,” exclaims Swati, of the experience. “When I visited Rishi for the first time and saw his studio setup and microphone, I remember thinking to myself what a dream come true it would be if I could sing for ‘The’ Rishi Rich on that mic. At that time, I had no idea that in just a few months, I would be singing on that same mic with Rishi recording my vocals for a song!”

Working alongside a legendary producer like Rishi Rich was a great learning experience, says Swati. “Playback singing is very different from live singing! In live shows, I can look at my audience and accompany the lyrics with expressions and gestures and connect with people.”

“With playback, the main challenge is that no one can see you, so you have to express all the emotions through your singing. And that’s what I love about it. When people tell me that they liked my singing in a recorded song, it’s really rewarding, because it means that I could connect with people through my song.”

Swati says her musical journey has been exciting and challenging. Growing up in Mumbai, she was always in music groups and choirs.

“One day, my parents gifted me a keyboard and over time I realized that I could play songs by ear. Then one day, I remember that our group’s tabla player was out and my music teacher told me to play the tabla. It was then that I realized that I could play the tabla by ear.  While kids my age were listening to modern music, I was listening to ghazals.”

After her family moved to the US, Swati continued learning and singing at home. Over time, when she realized that singing was more than a hobby for her, she started taking steps towards pursuing it professionally. She started making YouTube videos – beginning with instrumental covers and later doing singing videos.

“The response was really great and gave me the boost I needed to push forward. In 6 months, my channel ended up becoming the 7th most viewed channel in all of India and the 54th most subscribed. I started performing at live events and shows.”

Soon after, Swati went to India to participate in the ‘Indian Idol’ show and ended up as one of the top 25 contestants in all of India.

“Being a part of that show was an exciting experience and it was humbling that Bollywood composer Salim Merchant loved my voice. Since then, music has allowed me to travel across many states and cities for shows in the US, Canada and India. I can’t decide if I love performing live more or recording in a studio. But, they both have a different kind of rush and satisfaction of their own! I just want to sing – wherever it is.”

While ‘Dil Kya Kare’ will forever have a special place in her heart, Swati is looking forward to working on more projects with Rishi Rich. She also wants to focus more on playback singing. Towards this goal, she has been spending more time in Mumbai.