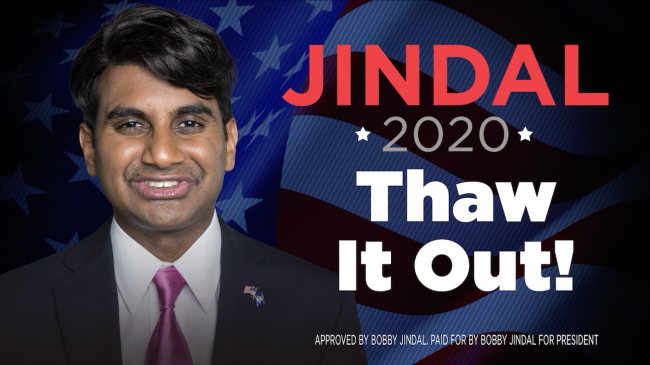 Washington, Nov 21 (IANS) Louisiana’s Indian-American Governor Bobby Jindal is out of the US presidential race, but that did not prevent Indian origin comedian Aziz Ansari from having some fun at his cost.

Ansari, who earlier mocked Jindal’s presidential run, was back on The Tonight Show to talk about his next steps in life, including a hit TV show, trying for president again in 2020, and some George W. Bush style painting.

Ansari-as-Jindal clarified that he’s only suspended his campaign, in much the same way that Han Solo was frozen in carbonite in The Empire Strikes Back.
He remains weirdly optimistic about his presidential bid, and has already picked a 2020 slogan: “Thaw It Out!”

The faux-Jindal is also pitching a show to Fox News that involves him travelling across the country to help strangers solve problems.

“What’s next?” asked host Jimmy Fallon. “I know a lot of politicians end up getting their own TV shows.”

“It was originally called Bobby Jindal’s Adventures Across America, but I thought that was a bit too long. So I shortened it to BJ’s Across America.”

He’s also dabbling in creating “high-concept nude” oil paintings, including one in which he flies naked on an eagle straight to the White House, said Jindal-Ansari.

Indian-American offloaded from flight over 'bomb hoax' in Pakistan