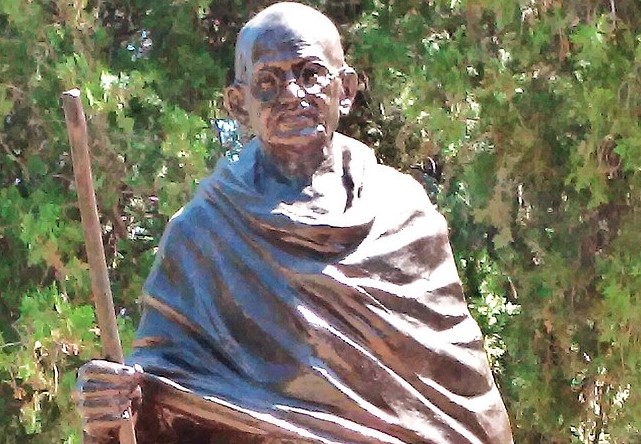 New York, Feb 2 (IANS) US President Joe Biden’s Press Secretary Jen Psaki has condemned the desecration of a statue of Mahatma Gandhi in California and expressed concern over the incident.

“We certainly would have concern about the desecration of monuments of Gandhi. And you know, that’s certainly what we would express,” Psaki said on Monday.

“But certainly we would, you know, condemn that desecration and watch it closely.”

Asked by a reporter about Biden’s thoughts on the attack, she said: “If there’s more to share on the President’s point of view on it, I’m happy to get back to you on that.”

The statue of Gandhi in Davis was cut down at its feet and the head was cut in half after it was toppled between the night of January 26 and January 27.

This is the second time that the statue was vandalized.

Obscene drawings were made on the base of the statue and crude insults were written in June 2020.

The Hindu American Foundation (HAF) has asked the Biden administration to investigate the latest incident as a hate crime.

“We condemn this cowardly desecration and call upon the Department of Homeland Security and FBI (Federal Bureau of Investigation) to investigate this hate crime, as it was likely done with the intention of intimidating the Indian-American community,” HAF’s California Advocacy Director Easan Katir said.

In his election manifesto for Indian-Americans, Biden had assured the community that he “will appoint leaders at the Department of Justice who will prioritize the prosecution of hate crimes”.

The President’s manifesto said that “he will order his Justice Department to focus additional resources to combat hate crimes, including religion-based hate crimes, and to confront White nationalist terrorism”.

Two protests were held on Sunday at the site where the Gandhi statue had stood, according to KCRA TV in Sacramento, the capital of California.

One was against the statue’s desecration and demanding security for the statue.

The other was by people who “said they were glad the statue had been removed”, the TV station reported.

The news clip from the station showed people in the group carrying a saffron flag with a Sikh religious symbol and a sign, “Ambedkar: Hero of minorities”.

A member of the group identified by KCRA TV as Nanak Bhatti said: “They are angry that the statue has been desecrated, they should not have put the statue in the first place. Why did they put it over here? Does the city of Davis deserve this statue? No.”

In June 2020, a protest was held in Davis mostly by Sikhs, but also included others, demanding the statue’s removal, the Davis Vanguard reported.

Dillan Horton, an African-American politician who ran unsuccessfully for the Davis City Council, was also one of the speakers at the protest, according to the Vanguard.

There have been anti-Gandhi memorial protests elsewhere.

In Atlanta, a protest was held in 2019 against the installation of a statue of Gandhi in the city and the establishment of a Fruit Forest donated by the Indian Friends of Atlanta, whose volunteers were to plant the trees in commemoration of Gandhi’s 150th birth anniversary.

Bhatti was also involved, telling the TV station that he opposed the statue and the Fruit Forest.

A petition backed by the Sikh youth organization Jakara Movement with 5,000 signatures had demanded the removal of Gandhi’s statue in the Peace Garden at Fresno State University in Fresno, California, last year, according to the Fresno Bee newspaper.

The nearly two-metre tall bronze statue of Gandhi, which was unveiled in Davis in 2016, had been donated by the Indian Council for Cultural Relations, which also gave the city $22,000 to install it.

Davis Deputy Chief Paul Doroshov told the Sacramento Bee newspaper that investigators were unsure of the motive behind the vandalism.

“Seeing as it’s a cultural icon to a portion of the people in Davis, we are taking it very seriously,” Doroshov told the newspaper.

Indiaspora, a global organization of Indians, said: “Davis to immediately commence a thorough process to bring the perpetrators of this act to justice, and reinstall a statue that pays homage to this apostle of peace.

“Mahatma Gandhi, like many iconic figures who are globally revered for their leadership in just and noble causes, was not a perfect man. But vandalizing and desecrating his statue is surely unacceptable in America, a nation that prides itself on the peaceful and democratic resolution of differences of opinion.”