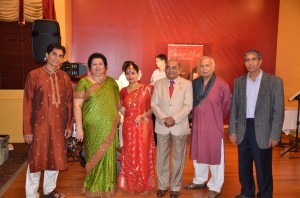 The guests were courteously greeted as they arrived and presented with Diwali sweets at the registration desk. After meeting and greeting and relishing tasty appetizers, all took their seats. The proceedings were emceed in a jovial manner by Rajen Raval who welcomed all, wished Happy Diwali and New Year and invited the Founding father and Chairman of Board of Directors,Chittaranjan Jyotishi to recite an invocatory prayer. Young and cheerful Sagnika Mukherjee graced with beauty and talent enthralled the audience with her Lakshmi Vandana. Later in the program she performed two scintillating dances to the songs from opulent and iconic movie ‘Devdas’. She performed the first of her two captivating dances to Silsila ye chaahtka’with a diya in her hand and a second one to Dola re dola,to resounding applause. 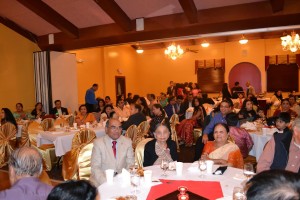 Then it was turn of young Vinay Mehta, age 12 to spice up the entertainment. He got on the floor in black pants, black hat and dark glasses and with his zesty, fast-paced dance-moves to a medley of songs– Teer chale,talwaar chale(Dabangg); Go go Govinda; and Aaya Dilliwali Girlfriend Chhod chhad ke’  had the audience cheering and clapping.

Preyas Joshi, age 8 confidently gave a short talk on the significance and symbolism of the annual Festival of Diwali which is celebrated over five days-Dhan Terash; Kali Chaudash, Diwali, New Year and Bhai Beej. 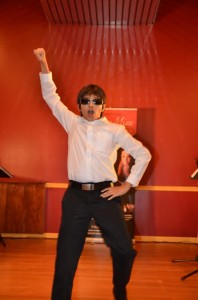 Mrs. Gita Kotecha, who is the first woman-President of BSOGA wished Happy New Year to all and introduced her Executive Committee members–Vice President-Ramesh Bhatt; Secretary Jaydev Jani; Treasurer Indubhai Raval. She said that during 2013, BSOGA had organized Janoi-changing (Sacred thread-changing) ceremony; a comedy play; Ganesh-Chaturthi Festival at the Sanatan Mandir Atlanta, and together with Ekal Vidyalaya, hosted Dr.Usha Bhargave’s program of Geet, ghazals and bhajans at the Impact Center, Global Mall, Atlanta. She informed that in 2014, BSOGA is planning to arrange a visit to Someshwar Mahadev Temple in North Carolina or Sri Ganesh Temple in Nashville.(Applause).Gitaben said she was happy to announce that a few new Life members and Members had been enrolled during the program. She recognized and thanked all the volunteers. She further thanked Indubhai Raval and Pramila Jyotishi who had donated the delicious Diwali Mithai (sweets) on the occasion. She also thanked Sagnika; Tanweer, Lakshmi, Preyas, Vinay, and emcee Rajen. 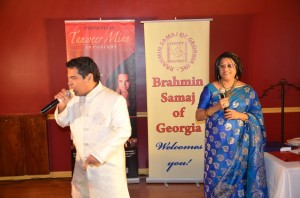 Then Mr. Jyotishi informed that the BSOGA founded in 1996 is young compared to Brahmin Samaj of New York, Chicago and New Jersey which are 40, 35 and 25years old respectively. He said that the BSOGA management keeps in touch with all the Brahmin Samaj Organizations in the U.S. as well as in India. He said that he had nursed a desire to see a Woman-President and he is happy that BSOGA has now its first Woman-President. He lauded Gitaben for her ability, persistence, hard work and courage (applause). He said that though he was 75 years of age, he was able, capable and available to take up any social challenge and so were his Board and Executive Committee members. He expressed his desire to one day see the whole Executive Committee composed of women. (Applause). He noted that he has appointed Bharat Kotecha and Ramesh Bhatt to review and revise the BSOGA Constitution. Three more members were needed to help them in this task. “Let us all unite and make BSOGA a vibrant Organization ensuring peace and harmony for all members”. 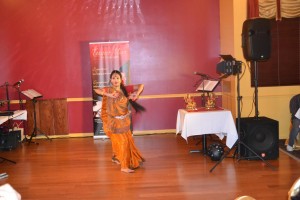 Jaydev Jani thanked all for attending and wished them a Happy New Year. He also thanked all performers for providing varied, engrossing entertainment. He also complimented Bharatbhai and Gitaben Kotecha for sharing their experience in organizing activities for Sanatan Mandir, Atlanta.

While the attendees were enjoying delicious dinner and dessert, Nimish Sevak regaled them with a few rib-tickling jokes.

The gala Diwali program concluded happily and all attendees were thrilled with the entertainment, friendship and family bonding experience of the evening.