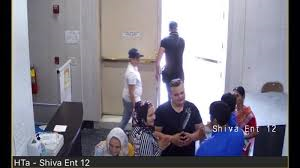 Atlanta, GA, September 18, 2019: Valer Iazmin Varga, Robert-Auras Adam, and Ana-Loredana Adam, all Romanian nationals, have been arraigned on federal charges of conspiracy to transport, in interstate commerce, stolen goods with a value of at least $5,000 and transporting, in interstate commerce, gold jewelry with a value of at least $5,000, which the defendants stole from the Hindu Temple of Atlanta, in Riverdale, Georgia.  Co-defendant Stela Patricia Varga was arrested on September 11, 2019 in Slidell, Louisiana on a federal arrest warrant related to the same charges.

“These defendants posed as tourists and allegedly stole gold and money from places of worship,” said U.S. Attorney Byung J. “BJay” Pak.  “They exploited their victims’ custom of receiving visitors with open arms in their temples and religious centers, and also allegedly involved their minor children in their theft scheme.”

“It is deeply troubling and hard to fathom that criminals would exploit the tenets of one’s faith by taking advantage of their kindness,” said Chris Hacker, Special Agent in Charge of FBI Atlanta. “Even though these suspects are alleged to have travelled from state to state to commit these crimes, they were not able to elude arrest, thanks to our partnerships with federal, state and local law enforcement agencies in six different states.”

According to U.S. Attorney Pak, the charges, and other information presented in court: The defendants traveled to Hindu and Buddhist places of worship in at least six states, including Georgia, for the purpose of stealing gold jewelry or cash.  Visiting the temples during operating hours, the defendants allegedly posed as tourists and asked representatives of the temples questions regarding the customs and practices associated with the temples. As one or more of the defendants questioned temple staff members, other defendants stole gold jewelry and cash from the temples, sometimes taking gold jewelry directly from statues within the sanctuaries in the form of various deities.

Valer Iazmin Varga, 28, Robert-Auras Adam, 31, and Ana-Loredana Adam, 30, all Romanian nationals, were arraigned on September 11, 2019, before U.S. Magistrate Judge Russell G. Vineyard.  The defendants were indicted by a federal grand jury in the Northern District of Georgia on August 20, 2019.