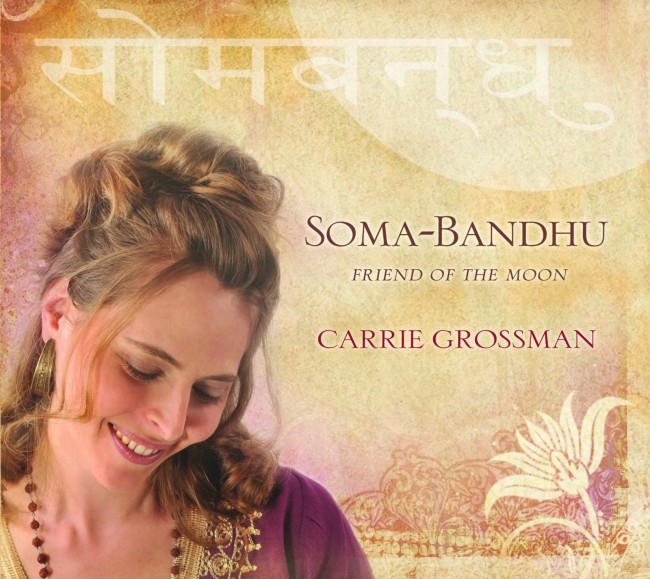 The cover of a record, “Soma Bandhu,” by Carrie Grossman, who has adopted the Hindu name Dayashila. Some students at Brown University protested against her singing kirtans because she is white and not born a Hindu. Her record includes the kirtans “Om Nama Shivaya,” “Jai Ma” and “Sarve Bhavantu.”

New York, April 25 (IANS) Singing of kirtans at an Ivy League university has drawn protests from a multi-racial group of students there.

Unlike in the protests against yoga, the demonstrators this time were not religious fundamentalists, but students spewing leftist rhetoric at Brown University.

They protested a non-Indian white woman singing kirtans, asserting that only those born Hindu should sing the religious hymns, according to media reports.

The performance by Carrie Grossman, who has adopted the Hindu name Dayashila, was disrupted Thursday by protesters claiming that by singing kirtans she as a white person was wrongly “appropriating” elements of Hinduism.

They used radical leftist terminology like white privilege, structural change and “radical love” to oppose what they called “cultural appropriation” by a white person.

“Cultural appropriation,” according to those who protest it, happens when people use or performs elements from a culture not their own.

Many in the audience confronted the protesters, who eventually left the event and staged a sit-in outside.

“Several audience members turned around and asked them to be quiet,” The Brown Daily Herald reported.

“In addition, some of the audience members stood up and moved to where the protesters were sitting to ask them to leave.”

Most of those in a picture published by Herald of the demonstration against the kirtan performance were white and African American, with few Indians.

“Color of the person should not matter in devotional singing and anybody should be able pay respectful homage to Hindu deities through kirtan or other forms,” Zed said. “Kirtan offered means to connect to the heart, to the divinity that lies within.”

He asked Brown University president Christina H. Paxson and chancellor Thomas J. Tisch to “make sure that such unreasonable interruptions did not happen at the Hindu events on the campus in the future” and to hold a formal inquiry into the disruption.

The Herald reported that Grossman, a Brown University alumna, told her audience that she discovered kirtans during a visit to India and “found (chanting) very powerful and very healing”.

Describing her mission to spread the singing of kirtans, Grossman writes on her website about her experience in the third person: “At the altar of her instrument she called out to the divine and unburdened her heart. This process was profoundly healing and, the more she did it, the more she felt drawn to share her sound with the world.”

She has produced a recording, “Soma Bandhu,” that features hymns like “Om Nama Shivaya,” “Jai Ma” and “Sarve Bhavantu.”

Although the protesters used radical leftist rhetoric, their agenda appears to be a form of selective opposition to conversions or religious interactions – in effect, banning those not born Hindu from singing Hindu religious hymns or participating in rituals.

Christian fundamentalist also oppose non-Hindus participating in Hindu cultural or health practices. From New York to California, some Christians have protested yoga practice in schools. Most recently fundamentalists in Georgia protested against the namaste greeting during yoga.

However, similar protests are not held by those claiming to be against “cultural-appropriation” when non-Christians sing Christian hymns or participate in Christian observances.

Wearing bindi or pottu by non-Indian women have also been crticised as “cultural appropriation.”

In the face of protests, the Contemplative Studies Departmental Undergraduate Group, which organised the kirtan, issued an apology saying that they “humbly acknowledge that those intentions (in arranging the event) do not preclude harm and hurt that we may have inflicted,” the Herald reported.

Ironically, Anchal Saraf, one of the protesters with an Indian name quoted in the media, was a signatory to a petition demanding freedom of expression at Jawaharlal Nehru University.

Even media faculties are not immune despite freedom of expression being at the core of journalism. Last year, a journalism teacher at University of Missouri, who supported an African American student protest, instigated an attack on an Asian American photographer trying to record it in a public place.