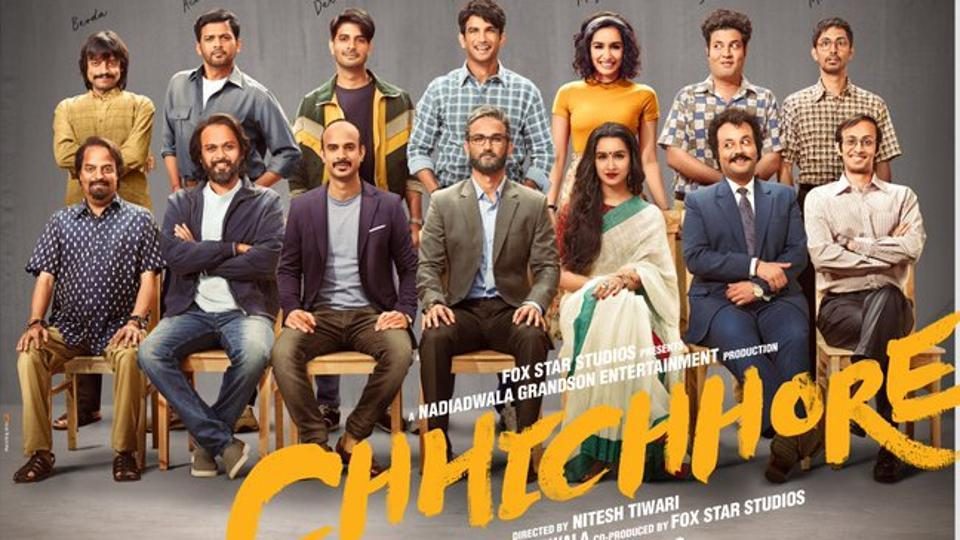 
“Chhichhore” is an obvious, all-round winner. It is a fun film with a not-too-complicated message, which fulfils the primary Bollywood objective of pleasing crowds. Despite riding cliches, it is impressively written, directed and acted out — which should satisfy most critics. And since the effort is likely to please crowds and critics alike, the outcome should keep the film trade happy.

“Dangal” maker Nitesh Tiwari’s new film tick-marks several boxes. It is topical in the way it highlights the ever-increasing pressure to excel in entrance exams that teenagers face. It is sweetly nostalgic in the way it sets up a rollercoaster campus ride, and melodramatic in doling out its coming-of-age theme. Beneath the boisterous laugh moments lies a quiet comment, too: In our mad chase of aspirations and ambitions, we often ignore a basic truth – the most important thing in life is life itself, and the necessity to live it to the fullest.

These themes have all been elaborately covered in mainstream cinema over the years, so why does “Chhichhore” stand out? Simply because of the finesse with which Tiwari and his co-writers (Piyush Gupta and Nikhil Malhotra) bring alive the tale. The screenplay unfolds without fuss, and yet leaves an impact. Another area where the writing shines is the dialogues. Insanely hilarious to subtly dramatic, the lingo never loses touch with realism.

This is the story of Annirudh (Sushant Singh Rajput) and Maya (Shraddha Kapoor), successful engineers and a divorced couple. Their worlds come crashing when their only son Raghav tries committing suicide after failing in engineering entrance exam. In hospital, Raghav’s condition continues slipping. His will to live ebbs and his body won’t reciprocate to treatment.

Anni hits upon a crazy idea, to revive his son’s interest in life. He starts telling Raghav the story of his days in engineering college, and how he, along with his bunch of friends and Maya, turned from losers to winners. For the right cinematic impact, the friends will arrive, too, when Anni calls them, to be at Raghav’s side as their story unfolds.

Oscillating between a grim present and a carefree past, the story sets up two very different coming-of-age sagas. There is Raghav’s plot, rendered with bittersweet sensitivity – fluctuating between hopelessness and hope. Then there is the story of Annirudh’s college days, where he and his hostelmates learn to believe they can win. Tiwari and co-writers balance these two very unlikely parallel subplots well, to set up a seamless entirety.

“Chhichhore” marks coming of age for Nitesh Tiwari, too. For long, the writer-director was waiting in the wings. His debut film, “Chillar Party”, was too small-budget an affair a” and, anyway, a co-direction venture with “Queen” maker Vikas Bahl. With “Bhootnath Returns” he did not quite grab the limelight. “Dangal”, his next, ended up Bollywood’s biggest hit ever, but it was always meant to be Aamir Khan’s film and little else.

With “Chhichhore”, Tiwari truly announces his arrival in the big league. Driven by story more than star power, and assured to hit the box-office bullseye, the film moves Tiwari into the club of exciting new-age mainstream filmmakers to look forward to.

“Chhichhore” manages to hold audience attention throughout its near two-and-half hour runtime, despite basically being predictable, feel-good fare. You realise this film is not just about what it intends to convey, but also about how this bit is executed. For that reason, “Chhichhore” is a rare Bollywood commercial film where the art of storytelling triumphs.

Of course, there are flaws. It seems rather farfetched, for instance, that Raghav should know about his parents’ college days after so many years, only when he is battling for life in hospital. Also, Shraddha Kapoor in the presentday track looks far from convincing as a teenager’s mother. And a lot of the climax also seems too contrived to be true.

Yet, you feel like going with the flow of the film, despite those flaws.

A big reason why the film clicks is the cast. A well-written script always accommodates strong characters for its actors, which is case with “Chhichhore”. In this film, each major actor gets two distinct phases of life to essay – as a 20-something collegegoer and as a 40-something middle-aged person. While Sushant is effortless in his portrayal of both ages, Shraddha is a perfect fit as the young Maya.

The delightful impact, however, comes from the supporting cast that plays out Annirudh’s friends — Sexa (Varun Sharma), Acid (Naveen Polishetty), Derek (Tahir Raj Bhasin), Bevda (Saharsh Shukla) and Mummy (Tushar Pandey). Each one of them gets at least a couple of well-penned scenes to showcase their talent, and each one impresses. Together, they underline the goodnatured irreverence that is inherent in the film’s title.