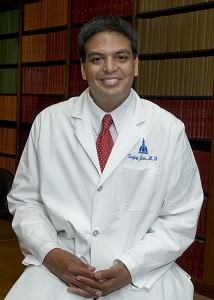 New York, Nov 16 (IANS) A team of specialists at Johns Hopkins Children’s Centre, including one of Indian origin, has successfully treated a child with a highly virulent form of tuberculosis known as XDR TB, or extensively drug-resistant TB.

The case provides the first detailed account of a young child in the US diagnosed and treated for XDR TB, according to the researchers.

“We are thrilled that our patient is doing so well,” said TB expert Sanjay Jain.

Mycobacterium tuberculosis, the bacterium responsible for TB, is estimated to cause almost 10 million new cases of TB disease worldwide each year, with strains impervious to drug therapies rapidly spreading.

The bug’s resistance to most known TB drugs render it particularly challenging to treat in anyone but even more so in children, the researchers said.

The major difficulties in the case, Jain and colleagues said, stemmed from lack of fast, reliable diagnostic tools to spot and track drug-resistant forms of the disease, lack of reliable markers to help them monitor response to drug treatment, and lack of pediatric-friendly drug formulations tailored to the physiologic and metabolic needs of children.

The child was brought to The Johns Hopkins Hospital for evaluation of unrelenting fever and malaise upon her return from India, where she and a sibling spent three months.

In all, conclusive identification of drug-resistant TB took 12 weeks, the researchers wrote.

The specialists used a low-radiation, child-friendly adaptation of computed tomography (CT) imaging technique to monitor progress of the treatment.

“In the absence of reliable biomarkers for pediatric TB, the acute need for rapid readouts of treatment response and the dangers of treatment failure, we felt a CT scan was our best option,” Jain said.

Given the child’s good overall health and the fact that her disease is in full remission, the a reactivation of the infection is unlikely according to the doctors.

Out of an abundance of caution, however, the researchers will continue to follow the child for another two years or so.

An account of the case was described in the journal The Lancet Infectious Diseases.