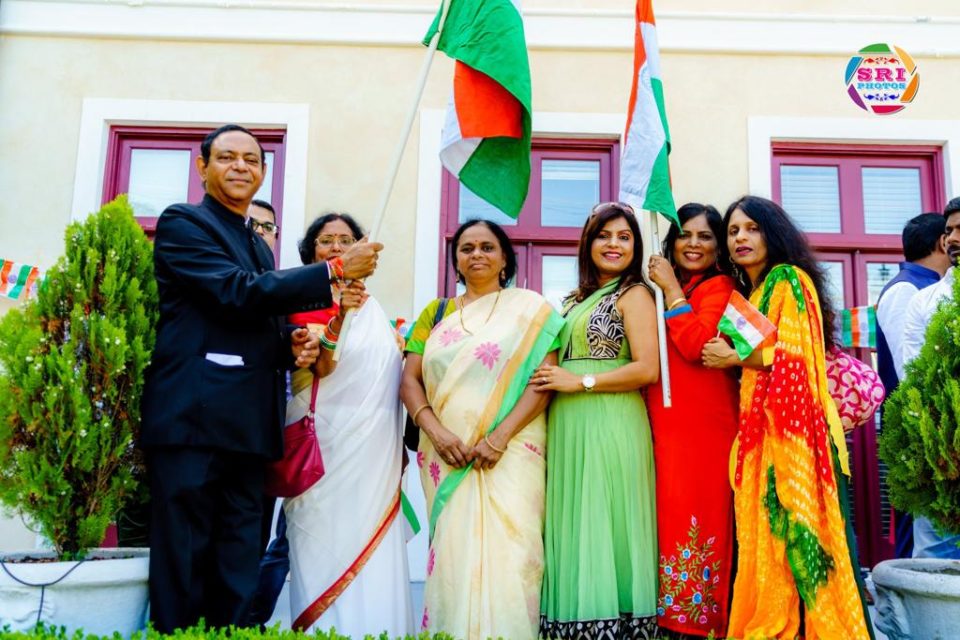 Atlanta, GA: Thursday, 15 August 2019, a week day, attracted well over 300 people to the Flag Hoisting Ceremony, marking the 73rd Independence Day Celebrations, hosted by the Office of Consulate General of India, Atlanta in Sandy Springs. A happy coincidence of Raksha Bandhan on the same day added an interesting dimension to the celebrations with rakhis being tied to men and women alike.

“Every election marks a new beginning. Every election is a renewal of India’s collective hope and optimism,” said Consul General Dr. Swati Kulkarni in her address. Dr. Kulkarni read out the President of India’s message and elaborated on the implications of the removal of Article 370.

“Indians across the country may have different tastes and habits. But all Indians share the same dreams. Before 1947, the dreams were for a free India and today it is for accelerated development, for effective and transparent government and for a smaller footprint of government in our daily life,” Dr. Kulkarni said.

Wishing viewers a Happy Independence Day and Raksha Bandhan, Dr. Kulkarni spoke to NRI Pulse about the significance of the Independence day celebrations and the upward trajectory of India’s progress. “You will recall that 72 years ago, our founding fathers committed us for justice, equality and liberty and democracy. That is why this day is highly important to us. Today’s India is vibrant, and a nation moving forward. We have unity in diversity, and we are on an upward, accelerated path of growth trajectory.”

Dr. Vasudev Patel, organizing secretary of the Overseas Friends of BJP highlighted the enthusiasm of people walking into the Consulate even after the flag hoisting was done. “People are excited about the new India,” he commented.

Amidst the festivities, Consul Shailesh Lakhtakia, Sunil Savili, Founder of Indian Friends of Atlanta (IFA), and Ritesh Desai, Georgians First Commission, in an exclusive with NRI Pulse, revealed an upcoming green initiative in Gwinnett County. The proposition involves planting trees including fruit-bearing shrubs in a Gwinnet park, selected by IFA, along with a statue/bust of Gandhiji, benches etc.

“The Government of India is celebrating 150th Birth Anniversary of Mahatma Gandhi.

As part of the celebration it is proposed to plant trees as a mark of respect to the Mahatma. Accordingly, the Consulate is associating with Indian Friends of Atlanta (IFA) to fulfill this objective. The details are being finalized,” said Consul Lakhtakia.

A fine celebration of independence and Raksha Bandhan, both of which bind the nation in their own unique ways completed the festivities on a high note with refreshments for everyone.