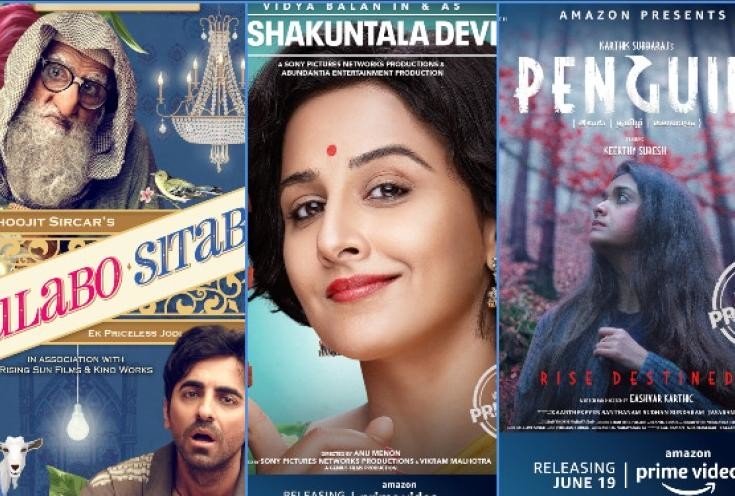 Mumbai, May 15 (IANS) Amid the ongoing COVID-19 lockdown as multiplexes remain shut, the streaming platform Amazon Prime Video is going all out in a bid to revolutionize the way we might watch films in the future. After confirming the Amitabh Bachchan and Ayushmann Khurrana-starrer “Gulabo Sitabo” for a digital release recently, the OTT platform now announces six more highly-anticipated Indian films, including “Shakuntala Devi” starring Vidya Balan, for digital premieres over the next months.

All these films will directly go to Amazon Prime bypassing traditional theatrical release.

The movies will premiere on the streaming platform over the next three months and will be available in 200 countries and territories worldwide.

“Ponmagal Vandhal” (Tamil) will release on May 29. The legal drama is written and directed by JJ Fredrick, and produced by Jyotika’s husband, Tamil superstar Suriya, along with Rajsekar Karpoorasundarapandian. In fact, as reported earlier by IANS, the Tamil Nadu Theatre And Multiplex Owners Association threatened to ban all releases featuring Suriya, or produced by his banner 2D films, in the wake of the his decision to release “Pon Magal Vandhal” directly on the popular OTT platform.

However, that does not seem to deter others. “Penguin” (Tamil and Telugu) will go live on June 19. The film is written and directed by Eshavar Karthic. The film is produced by Stone Bench Films and Karthik Subbaraj. While “Law” (Kannada) is slated for June 26, “French Biryani” (Kannada) will release on July 24.

The release dates of “Shakuntala Devi” and “Sufiyum Sujatayum” are yet to be announced.

“Indian audiences have been eagerly awaiting the release of these seven films, and we are delighted that we will now be premiering these movies for our customers — who can enjoy watching these from the safety and comfort of their homes and on a screen of their choice,” said Gaurav Gandhi, Director and Country General Manager, Amazon Prime Video India.

As part of a long press statement issued on Thursday evening, and without naming any film or production house in particular, the multiplex chain INOX stated: “The decision of production house to deviate from the globally prevalent content windowing practice is alarming and disconcerting. Cinemas and content creators have always been into mutually beneficial partnerships, where one’s action provided fillip to another’s revenues.”

Amazon goes after scammers in US, India who lured Alexa users via fake apps

A film can be made on my life: Ranu Mondal tells her story