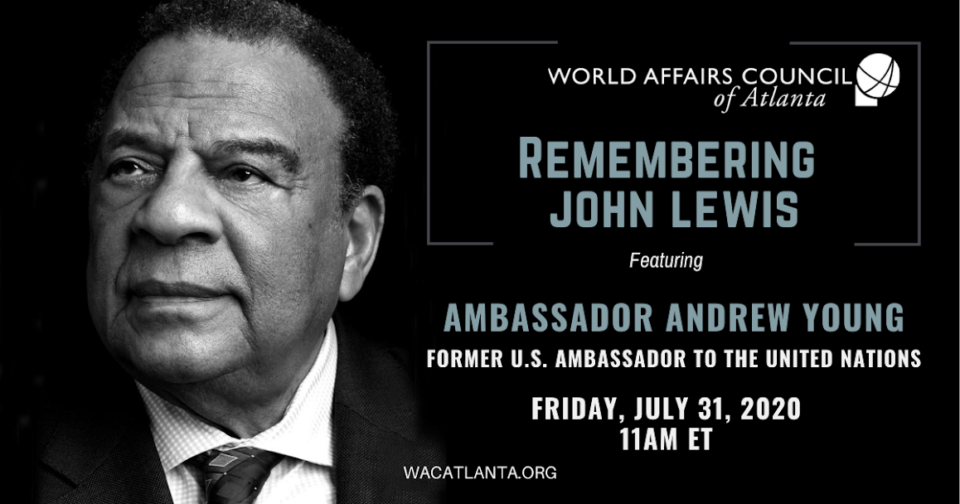 The Global pandemic has brought everyone to face the fear of disease and death. Different countries in the world are dealing with it in their own way.

USA is not only facing the Corona Virus and realizing that the leadership failed to prepare for it, in spite of having warning ahead, as it first started in China.

Congressman John Lewis died from pancreatic cancer on July 17, 2020. A widely admired civil rights leader, he marched along with Dr. Martin Luther King Jr in Alabama, and also helped organize the March on Washington August 28, 1963. Lewis was the youngest speaker of this historic event, and also the last speaker.

Ambassador Andrew Young, was a guest speaker who shared his memories with moderator Charles Shapiro, President of the World Affairs Council of Atlanta at a Zoom meeting on Friday, July 31, 2020. The Youtube for this video is here:

It brought waves of peace to hear Ex Mayor of Atlanta Andrew Young, who is one of the icons of the civil rights movement. Having gone through all the pain and struggles to fight for the civil rights movement to witness the death of George Floyd and several others must be so hard I thought  as I entered the meeting. However the calm composure of Andrew Young was still the same as I first met him in 1982 and met him a couple of times over the years.

Mr. Shapiro started the meeting with “Where did you meet Congressman John Lewis?”  Young very vividly described his  first impression meeting Lewis as a  young  student  at campus, in Nashville.   He saw Lewis  was followed by  many students. Lewis served as the chairman of the Student Nonviolent Coordinating Committee (SNCC) from 1963 to 1966.

Along with describing Lewis as a serious, quiet and determined leader who was humble to the core in spirit. He recalled that Lewis’ integrity made many follow him.  He had the courage to be in the forefront when it came to face the opposition. He faced being beaten up and landed up in jail several times.

Young took us down the memory lane, describing his journey from serving as pastor, his move back from New York in 1961 influenced by his wife Jean,  how his role evolved even though he was hesitant in the beginning. He mentioned  other leaders Hosea Williams, C. T. Vivian, role in the civil rights movement.

On March 7, 1965 John Lewis, led marchers across the Edmund Pettus Bridge in Selma, Alabama and faced brutal attacks by oncoming state troopers, which is known as Bloody Sunday.

The marches were organized by nonviolent activists to demonstrate the desire of African – American citizens to exercise their constitutional right to vote, in defiance of segregationist repression. By highlighting the racial injustice, they contributed to passage that year of the Voting Rights Act, a landmark federal achievement of the civil rights movement.

Young shared that Dr. King followed the method of non-violent protest, called Satyagraha by Gandhi. This approach was based on three principles; to be truthful, not hurt anyone, and be willing to sacrifice for the cause.

Gandhi helped India achieve its freedom from the colonial power of British rule without killing anyone. He did not use political power or intellectual power but soul power to achieve his goal. He shared that Southern blacks look at Jesus in one way and Southern whites look at different way, but Gandhi showed us the third way – turning the other cheek when beaten on one cheek.

Humility is very powerful, but many people underestimate the power of humility because they think the world will take advantage of them. During President Jimmy Carter’s 4- year term not one American lost life in war. He is humble and peace is the way that helps us to make a U turn.

Young recalled growing up under his father who was a dentist and mother who was a teacher. His father taught him not to yield into anger, hatred, because of someone else’s sickness. When someone is sick you do not get angry  or hate them.  Similarly, white supremacy is a sickness. White people fail to see and accept that God has given the same color of blood to everyone in the world. They fight because they are fearful. When you fight back you aggravate their fear even more. So, do not waste your soul power in anger and hate. Soul power is like money the less you spend the more you have it. Instead develop more soul power by focusing on improving yourself and do not advertise the power. Learn to handle everything in a calm way so you can think with many people. His father showed him the movie of Jesse Owens, who won the Gold medal in the 1936 Berlin Olympics. When Hitler expressed anger at him, he did not fight with him or say anything but moved away  and went and won 3 more gold medals.

Young shared that John Lewis would everyday meet with a group of students at 6:30 am and study Gandhi’s teachings, or his life and then go out to any meetings for non violent movement. Lewis lived his life according to the Nonviolence  teachings of Gandhi.

According to David Hawkins, we change the world by not what we say or do but by what we become. “To focus on a teacher or their teachings by meditation makes the power of that teacher available to the seeker.”

With the upcoming August 2, Global Forgiveness Day, people around the world are encouraged to be still for 2 minutes at 2 pm to pray to forgive others and to seek  forgiveness. Reflecting on this over the weekend made me realize the importance and significance of this simple act of forgiveness. In order for us to grow in love to develop the strength to move on forward the baggage of hate and resentment can only be dropped by forgiving. To what petty things we hold on to sometimes compared to the pain of segregation?

With the pandemic we are unable to  carry on daily routines that used to be so called “normal” before like shopping, going to work, going on vacation. Man has become so self centered and focused on only for the benefit of oneself, that life is giving us the time to be at home alone and face the fear in isolation to recognize that we are connected globally not only through technology but also in disease and death, health and harmony. We are a global family, we cannot live and think in compartments of imaginary boundaries and borders.

In the beginning of the year I penned down an article called Vision 20/20 to encourage myself and others’ to view life in a balanced way. As the months rolled during this pandemic my understanding from seeing, viewing, imagining and viewing just expect expanding the horizon. Witnessing the death of George Floyd by white police officers, in Minneapolis, Minnesota has stirred protests not only around the USA.  Black Life Matters has gathered momentum, supported by 60 countries and business communities around the world.  Young assured that the Black Life Matters is going to have a very strong impact as the speed of communication is faster, and now people see how blacks are treated, this will not allow the consciousness of the Americans to ignore it. Just like America, saw the picture of a nude girl who was humiliated in Vietnam, Americans just woke up and brought an end  to the Vietnam war. Similarly, it will not allow the American conscious to be quiet. The very fact  different minority groups  and different countries became  involved in Black Life Matters is an indication that things will change for the better. The corporate world is also recognizing the fact that Black Life Matters.

As I was reading and reflecting  on John Lewis,  I finally saw what made John Lewis overcome all obstacles with courage, to answer violence with non-violence, hatred with harmony, carry  love and be at peace within, no matter what happens outside. It is how he saw himself and others.  “Everybody carries a spark of the divine within that needs to be treated with dignity and respect.” He didn’t judge with right or wrong, good or bad, but his focus was on light. When we focus and face light the shadows are behind us.

The death of John Lewis, at the time when the country is going through so much anger and fear, may help open another window to see that there is a better way to live in this world. John Lewis encouraged us to look at the world as our home and we are one family. Dada J.P. Vaswani often said not only humanity is one family but creation is one family which includes animals and birds fish and fowl. A small virus has waged a war against the world that started at an animal slaughterhouse in China.

Growing  up in south India, I was considered white, and in the USA I was told, “Oh I love your dark skin” and other times “brown skin.”  Who am I?

It definitely has made me reevaluate my life and focus on how I can cultivate Soul Power. To stay in remembrance that I am a Divine Spark, by not allowing how others view me to extinguish my spark.

Every time I am aware of my breath, I honor that spark as breath is what keeps us alive.