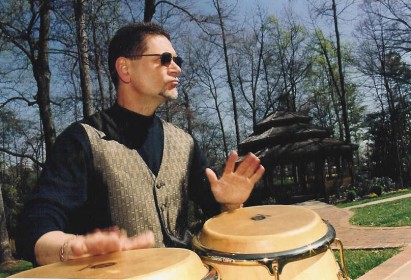 Pt. Samsi along with various prominent artists will be in Atlanta to serve up a “Cultural Thali” featuring food, music and the culture of India to students of The Mount Vernon School this September.

The six-week class offers music, dance, art, demographics, the role of women historically and in the present, religions, influential figures, and cooking Indian food. “Cooking and consuming of Indian food is one of the most appealing aspects of the class from the student’s point of view. While 6 weeks is not very long, I hope to, at least, expose, enrich and sensitize the students to the richness and diversity of India through this Thali,” said Jerry Fields, percussion instructor at Mount Vernon.

Jerry Fields Music and Mount Vernon will also present “A Night of Classical Indian Music”, featuring Indradeep Ghosh, trailblazer for Maihar Gharana, known as the  “Prince of Violin,” Brajeswar Mukherjee, vocalist of Hindustani Classical Music, and Gourisankar Karmakar, a class A artist on AIR  who  began studying tabla at age 3.

Pt. Samsi has devoted the last few years to researching and collecting historical compositions from the Punjab Gharana that were lost due to the Indo/Pak Partition.

As a soloist, Yogesh balances both history and innovation in the rich tradition of the Punjab Gharana. His performance brings fresh perspective to the canon by presenting new ideas that capture the philosophy and rhythmic thought processes of his Guru, Ustad Allah Rakha.  As an accompanist, Yogesh has provided sensitive and thoughtful tabla accompaniment for many leading vocalists and instrumentalists. His approach has been instilled by the close grooming under his father and stalwart vocalist, Pandit Dinkar Kaikini.

In his interview with NRI Pulse, Fields talked about the inspiration for the Thali. Having always been interested in other cultures, Fields discovered the need for students to be exposed to cultures other than their own. “If they are to be able to interface respectfully, efficiently and mutually with fellow passengers on the Global Spaceship that we all live upon and call Earth. What better way than to start with a culture as rich and diverse as India’s. India is where the journey of Thali begins.”

“Yogesh Samsi will bring his vast knowledge of the classical music of North India to Mount Vernon and share his personal insights into the spiritual and mental development that can be attained through the surrender to one’s Guru and art form,” said Fields.

“It is my goal that students gain a rudimentary understanding of India’s history from the ancient Vedic period until the present age. Hopefully, the class will enable the student to see the many similarities that exist among all the world’s peoples. Through the interaction of five of the senses, I hope the students leave the class respectfully and fearlessly curious about the world that they do not experience day by day,” said Fields about the takeaway for students from the class.

Describing Fields as a wonderful musician, Pt. Samsi noted that the Thali was the result of Fields’ deep connection with India and Indian culture. “Through my performance I would like to convey the rich heritage of this age-old art form of Tabla that has such a glorious history and repertoire and, today is probably the most developed percussion instrument in the world.”

“My life’s biggest achievement so far as I see it today is to preserve the rich tradition of this art form handed down to me by my Guru Ustad Alla Rakha of the Punjab Gharana,” said Pt. Samsi who has been presenting his art across India and the world.

Pt. Samsi has about thirty professional table players who will further carry on the tradition.

Students must have complete faith in their Gurus and surrender to their knowledge, advices Pt. Samsi to aspiring students, adding that it is important to absorb the profound art form and the philosophy behind it. “Have a sense of devotion to the art form, towards hard practice and further development of the art form and one’s own true self,” advocates the maestro.