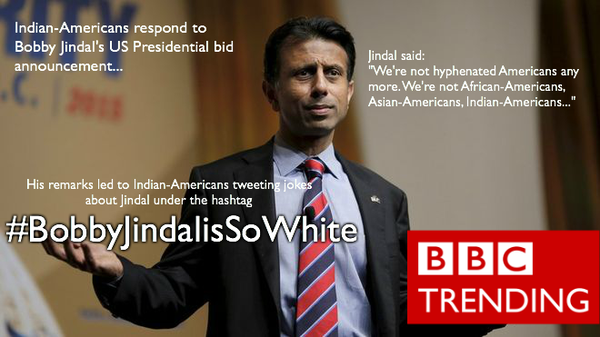 Washington, June 26 (IANS) Louisiana’s Indian-American Governor Bobby Jindal has found himself in the eye of a twitter storm ever since he kicked off his US presidential campaign distancing himself from his Indian heritage.

Jindal’s reiteration that he is not a hyphenated “Indian-American,” but just an American, spawned a series of jokes here and in India under the hashtag #BobbyJindalIsSoWhite.

Among the Kondabolu gems were:

#bobbyjindalissowhite that he mispronounces his own name

#bobbyjindalissowhite he refers to Indian food as “ethnic cuisine.”

#bobbyjindalissowhite he beat himself up after 9/11

U might be a #Jindian if u r the son of immigrants who is anti-immigrant.

Bobby Jindal went to Brown University, but it made him EXTREMELY UNCOMFORTABLE.

Referring to high scholastic achievement of Indian-American kids, Mandvi tweeted: The only thing #Indian about #BobbyJindal is the 4.0 he got in High School.

But Priyanka Mantha had the last word: #BobbyJindal makes history as the
first former Indian American to run for President

“Is there anything this guy won’t say to get elected?” he asked adding, “Stay tuned. He’s got lots of competition in an already-crowded field of blowhards and extremists.”

But an opinion writer in the New York Post came to Jindal’s defence saying:

“The reason Jindal has come in for such treatment is because he’s an eloquent advocate for integration and the promise of America.

“They’re not making fun of his background – they’re treating him like the Indian Clarence Thomas,” a conservative African-American judge of the US Supreme Court.