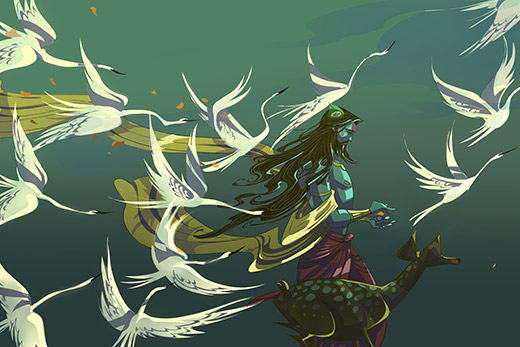 These are the questions underlying “Transcendent Deities of India: The Everyday Occurrence of the Divine,” an exhibition opening at the Michael C. Carlos Museum on Jan. 18. More than 70 works of art by Raja Ravi Varma, Manjari Sharma and Abhishek Singh explore the visual communion between humans and the divine.

For Hindus in India, images of gods and goddesses are an integral part of religious practice. These images inspire worshippers and artists alike, populating the art of the region for thousands of years and demonstrating their power through hundreds of millions of daily encounters during rituals at temples, shrines and other settings within India and the broader diaspora.

“Transcendent Deities of India” explores the gods and goddesses through photographs, digital works, drawings, paintings and modern chromolithographs. Each artist approaches the subject from a different angle.

Raja Ravi Varma (1848–1906) was an Indian artist whose paintings are considered to be among the best examples of the fusion of Indian traditions with the style and techniques of European academic art. Varma’s paintings were well regarded, but it was his vision for distributing his images widely through chromolithography that ensured his continuing renown.

He founded several presses to make his images more accessible to the general public; as a result, reproductions of his artwork depicting Hindu gods and goddesses could be found in many homes and businesses. As the works in the exhibition demonstrate, owners of these prints frequently had them embellished with fabric, embroidery and other materials to further adorn the deities depicted.

Hindu deities historically have been depicted predominantly through sculpture and painting. Manjari Sharma, who moved to the U.S. to earn her MFA in photography, chose to turn her lens to the deities she had grown up with in India.

Sharma’s elaborately staged “Darhsan” series came to fruition through her collaboration with a team of Mumbai-based artisans, sculptors and painters, whose sets, costumes and styling transform models into archetypal representations of Hindu deities. The title “Darshan” comes from the Sanskrit word meaning “vision” or “view,” and refers to the experience of connection between deity and viewer.

Abhishek Singh’s art reimagines subjects drawn from the major epic narratives of India such as the Mahabharata and Ramayana, connecting the spiritual and the symbolic to the fantastic. Singh’s dynamic contemporary perspective incorporates graphic novels and animation and reflects conceptual concerns around the intersection between the temporal and the sacred by rendering traditional subjects anew.

A consummate draftsman, he utilizes traditional images along with modern representations such as those of Raja Ravi Varma to demonstrate the ongoing relevance of these gods and goddesses to contemporary life. He will be in residence at Emory through Jan. 21.

“Transcendent Deities of India: The Everyday Occurrence of the Divine” is organized by Asia Society Texas Center. In Atlanta, it has been made possible through generous support from the Michael C. Carlos Museum Visiting Board, Chai Pani Restaurant Group and the City of Atlanta, Mayor’s Office of Cultural Affairs.

The exhibit is on view Jan. 18 through May 17 and will include several related events for children and adults.

This report was originally published on news.Emory.edu.