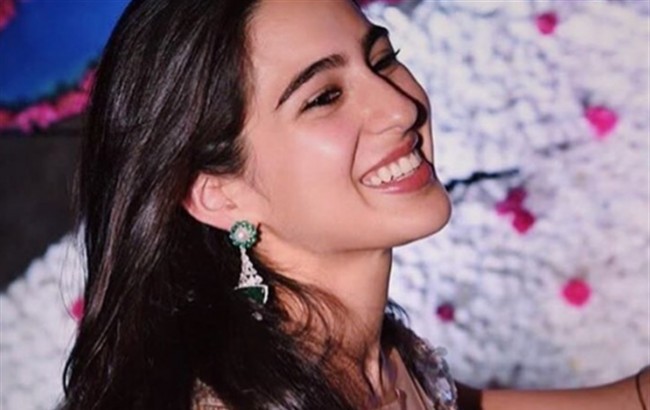 Mumbai, Jan 5 (IANS) She made an impact with her debut film “Kedarnath”, and her second release “Simmba” is also a hit. But actress Sara Ali Khan, who has fan clubs all across India doting on her, says she neither has time to feel like a “star” not does she think she will let herself feel like one in future.

Your gorgeous grandmother Sharmila Tagore says you have immense poise for someone so young. Where does this self confidence come from?
I guess it comes from being honest. And that’s the only way I can be. Let those who can lie convincingly do it. I can’t! I start fumbling the minute I lie. Staying true to myself suits me just fine.

What kind of reactions are you getting from family and the media?
The family cannot be expected to be objective. They are expected to be nice to me in whatever I do. After all I am their daughter. But the way the reviewers, critics and audience have reacted to me, is overwhelming. This is a moment I am not going to forget ever in my life.

Do you deserve all the love you are getting?
80 per cent of it, I deserve. The other 20 per cent I don’t know where it is coming from. And it’s making me feel very grateful and emotional. I don’t have any experience in acting. All I had was my honesty. And that was my only go-to.

“Kedarnath” was my first experience in what happens before the camera. Of course I had been on film sets before to see my mother (Amrita Singh) shoot in ‘Kalyug’ and my father (Saif Ali Khan) in ‘Omkara’. But all I did was play around with my parents’ co-stars’ make-up.

“Kedarnath” was my first opportunity to observe filmmaking and be part of the process. My only tool of working on the sets was my honesty. Of course, I always wanted to be an actor.

Posing as a child in front of the mirror? Wearing your mother’s clothes?
All of that, all of that.

In that case why did you go to Columbia University?
To me, education was not a means to get a job. It was my way of widening my horizons. I didn’t think I was going to be practicing lawyer after attending Columbia. Education has made me a confident person. It doesn’t only teach you history and geography. Education gives you insight into life. It gave me a heightened awareness of life, and that helped me become a better actor.

You were raised mostly by your mother. Not having your father around, was that a lacuna you felt?
I was more than okay with that arrangement. I think having two happy parents in different homes is much more preferable than two unhappy parents in the same home. I think I am the way that I am because my mother didn’t let me feel any kind deprivation for even a second.

I have a very hands-on mother. Once my brother and I were born, she did nothing but look after us.

So she never allowed you to miss the presence of your father?
My father was always a phone call away for both of us. I’ve never felt he was not there for me. In many ways, I am glad my parents were not together. I know they would have never been happy together. And if they were not happy, I would not have been happy.

Now Saif gives so much attention to Taimur which you never got. Do you feel a pang of envy?
Not at all. He’s my brother. I will tell you something. When my father was living with us, he was completely taken up by me. When he moved away, he was still as caring. There’s nothing he wouldn’t do for me. Even when he doesn’t live with us, the thought that he would do anything for me makes me feel very special.

My father may not be there for me the way he is for Taimur. But that doesn’t make me feel any less special.

Do you look forward to working with him?
God willing, we will work together soon. But for obvious reasons it’s not something that would happen over and over again. But if we get a script that justifies our presence, we will do it without a moment’s thought.

What did your brother Ibrahim think of “Kedarnath” and “Simmba” and you?
He’s studying abroad and he is the only member of the family who hasn’t seen my films.

Does he aspire to be an actor?
He does. But as I’ve discovered, it’s an easy dream to have but a very difficult dream to achieve. But I feel Ibrahim has the talent. Once he enacted a monologue for my mother and I. I was holding the sheet of paper on which his lines were written. I couldn’t look at the sheet as I was busy looking at his eyes. They were so emotive.