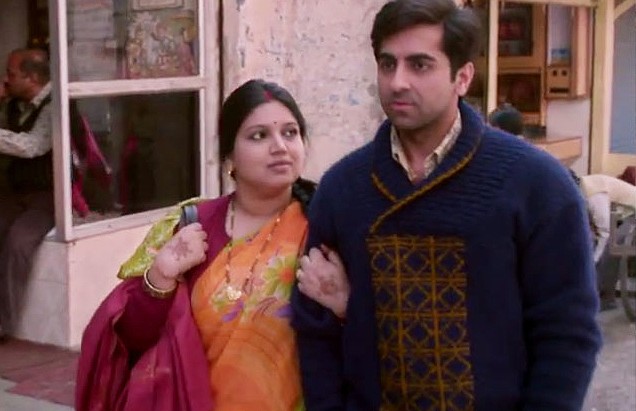 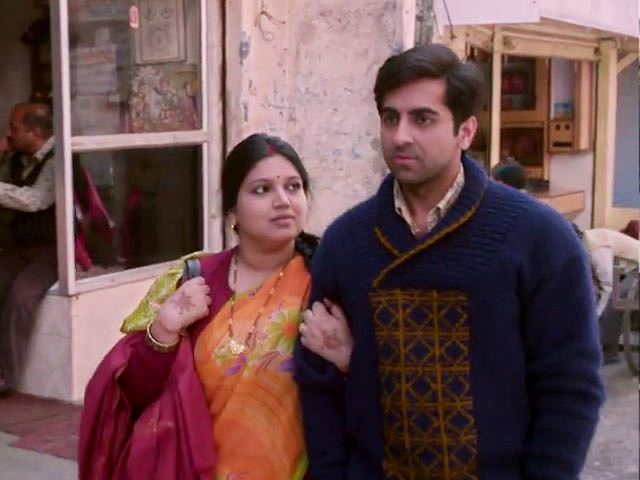 Come to think of it, 20 years ago, Mishra and Pahwa could have comfortably played the lead of an uncomfortably married couple here. Ayushmanna Khurrana is the under-educated Kumar Sanu fan from Haridwar who doesn’t seem to have much ambition in life except to marry a pretty girl.

Newcomer “with a commodious qammara” Bhumi Pedneker is the educated aggressive girl who doesn’t believe in taking it lying down from her newly married husband. Uncannily, Ayushmann with his slouched obduracy reminded me of Rakesh Pandey in Basu Bhatterjee’s “Sara Akaash”, the newly-married chap who won’t talk to his wife because, well, she doesn’t quite fit. And we don’t mean into the narrow doors and gallis of Haridwar where she moves with the counter-clumsy certainty and dignity of a woman who knows her weight is not going to let her become anyone’s dream woman, not even her dear beloved husband who after a drink or two describes as a “moti bhains” in front of his friends.

“I am the bride. But it’s he who blushes like one,” Sandhya (Bhumi) tells her curious friend who calls on the landline (this is 1995) to know what happened on the suhaag raat.

Well, nothing did. If you must know.

A majority of the first half is taken up in showing how Sandhya builds a bridge of confidence with her reluctant bridegroom, only to discover he is not worth it. Fiery and obstinate Sandhya leaves her ‘sasural’ and returns home. One of the film’s many warmly meditative moments occur when Sandhya’s mother tries to hurriedly lecture her about how much a woman must endure to keep a marriage together. That moment is treated like a dismissive joke. So is the activist-lawyer who seems to enjoy separating Sandhya from her husband. The film mocks feminist ideology without resorting to crass strokes of aggression.

“Why don’t you two also go in for a divorce right now?” Prem suggests with saddening sarcasm.

The writing is so fluent robust and rooted to the milieu that we never feel the weight of nostalgia in the words. Though set in the pre-cellphone, VHS, audio cassette era, “DLKH” carries the weight of its periodicity very lightly, almost jauntily.

In that sense this film differs widely from Ayushmann’s previous release “Hawaizaada” where the period flavour was pronounced and pungent. Here the aroma of the 1990s pervades the screen in intangible wafts. We feel the atmosphere in every character’s existence. These are people who don’t really care about how much they weigh as long as they can forge some meaning out of their meager existence.

The rather self-conscious finale is sadly a cinematic necessity that happily, doesn’t take away from the film’s utterly unselfconscious weightless debate on marriages being made in heaven or hell.

What works forcefully in the film’s favour is its disarming simplicity. Debutant director Sharat Katariya is a diligent steadfast storyteller. His eye for visual detail(inherited from his guru Rajat Kapoor) goes a long way in making the character’s appear larger than their strife.

Ayushmann totally transforms into Haridwar’s Sanu fame thumb-controlled by a father who slips condoms into Sunny-Boy’s hands on his suhaag raat reminding him that they can’t afford to expand their family at the moment. Debutant Bhumi plays the overweight bride with a breezy confidence that gives ‘wazan’ to her performance. She is a prized find.

There are many heroes in this economically-told unfaltering tale of a marriage of incompatibles: the debutant director, so unerring in his detailing of the drama, the serene city of Haridwar caught in a bright but believable light by Manu Anand’s camera, Ayushmann bringing back fond memories of Raj Kapoor and Amol Palekar’s working-class anxieties.

Every character, from the heroine’s bratty kid-brother to the hero’s Muslim friend, is so sharply sketched they only needed to be fleshed out by able actors, like Sanjay Mishra and Sheeba Chadha, the latter playing the former’s sharp-tongued spouse-deserted sister seeking entertainment in domestic strife.

A word about Yash Raj Films, the banner that seemed to be floundering lately, gathers together its wits with this homage to the North Indian middleclass marriage which the late and much-missed Yash Chopra would have liked.

From DDLJ to DLKH, way to go, Yash Raj. DLKH is a heartwarming charmer suffused with that lived-in feeling which seemed to have vanished in the run to that glitzy shallowness where a dhoom or a bang-bang were seen as viewer-friendly explosions. Here is a big-hearted shout for a bygone era and arranged marriage where love happens later crammed with episodes and moments that add up to an invaluable and cherishable experience.

By the time Ayushmann’s Prem makes that run with Sandhya on his back, you are already rooting for the underdog and his under-affluent world of little pleasures.

Dil Bekaraar: A charming rom-com that will make you nostalgic