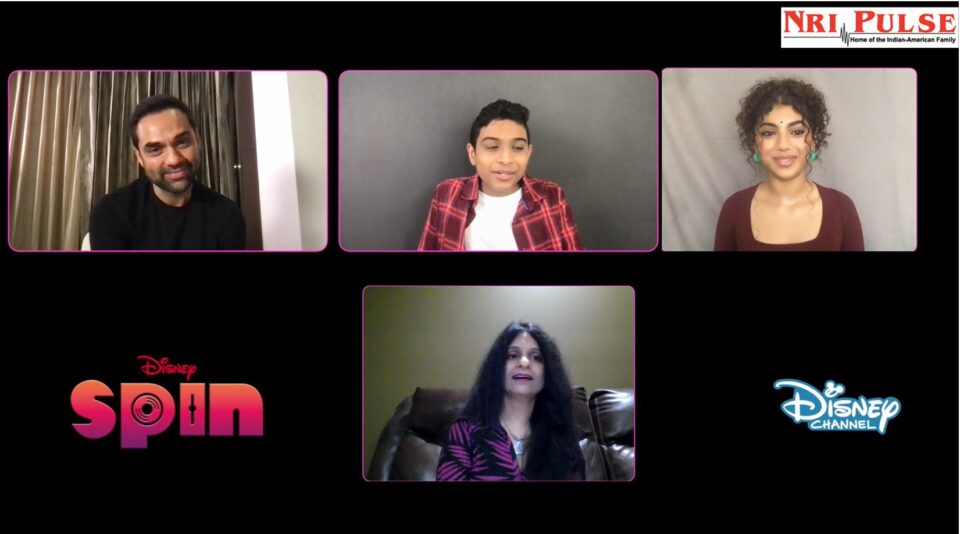 Disney’s ‘Spin’ is a heartwarming tale of Rhea, played by the multitalented actress, model, dancer and singer, Avantika. Rhea is a relatable Indian American teen whose journey of self-discovery empowers her to find her true love—creating and producing beat-driven music infused with the rich textures of her South Asian culture.

Bollywood’s face of independent cinema and supremely versatile actor Abhay Deol plays Arvind, Rhea and Rohan’s loving dad and chef who runs his family’s restaurant Spirit of India. A widower of eight years, Arvind is not quite ready to move on and pours himself into his restaurant to ensure everything runs perfectly.

Aryan Simhadri stars as Rohan, the ambitious and innovative younger brother of Rhea. A restaurateur in the making, Rohan is always ready to share his ideas to enhance his family’s restaurant. Written, directed and produced by Manjari Makijany, Spin is a first of its kind for Disney, centered on Indian family values, and with an Indian American lead.

In their exclusive with NRI Pulse, the trio shared their experiences about working on the sets of Spin, the kids’ early exposure to the world of cinema and Deol’s deviation from this usual genre’ and comparison between Bollywood and Hollywood.

Known of his portrayal of edgy and complex characters, what appealed most to playing a dad in Spin? Deol has family in the US and was excited to see a script with a focus on young Indian Americans.

“I have nieces and nephews, so when I read this script that represented them– and it’s so rare to see them front and center and their lives being sort of shone a light upon– I could relate to it from that perspective so I was excited and it being Disney would make it much more accessible to family and kids. I’ve never done a kid’s film before.”

“It is a very full circle moment to have this project that I auditioned for when I was like 12, be the first big movie that I’ve got,” said Avantika (now 16) who had flown to LA to meet Judy Taylor, VP, Disney for the same movie. The project was still being developed at the time.

“Disney really wanted to preserve the authenticity of the script and make sure that it was accurate,” notes Avantika. Avantika is also known for her role as Monyca in “Diary of a Future President,” and the voice of Kamala in ‘Mira, Royal Detective’, both by the Disney family.

Her additional acting credits include roles in “Moxie,” “Brahmotsavam,” among others. A less known fact is that she won the child artist award for her role in the Telugu short film Praja Hakku, directed by Anand Kumar. Did she still have to audition this time around? Yes!

Along from the working with the “wonderful” Makijany and the team, Deol said his biggest takeaway was the opportunity to channel his own nieces and nephews to whom he “kind of plays parental roles with once in a while,” and then use it creatively in this space. “It isn’t always a beautiful experience on a film set because some sets are better than others and this is one of the ones where you really did feel like family.”

Avantika and Simhadri forayed into acting and pursued their passion very early on in their lives. Does the real-life Avantika relate to her on screen persona more because of it? “I think they are very similar in the sense that we both were kind of on our own journey of navigating multiple things and kind of learning how to balance everything,” said Avantika, adding, another thing that binds them is their sense of responsibility towards friends and families and the evolution in their growth.

Simhadri said he forayed into acting at age five and has a keen eye for the craft. “I just enjoyed getting to work with such an amazing casting crew Makijany and Zanne – they are absolute powerhouses like they nailed it, everything, the sets, the casting, like minor details that no one would pay attention to except for me,” adds the very observant young actor. He credits Deol for “making me (Simhadri) feel comfortable on set and really kind of emulating that dad persona.”

“I don’t want you to just look authentic, I want you to be authentic,” Avantika was told by the meticulous Makijany. So she did. She learned to DJ and its basics from Mario and her coach BJ. While Avantika does not have a favorite DJ per say, she favorite singer is Amy Winehouse. “I love her so much and I think she just left behind a beautiful legacy.”

How would they summarize Spin in one word – “Heartwarming,” said Simhadri who went first, Deol would agree but “since it was taken”, went with “warm and fuzzy.”

Take a Spin with these talented and highly insightful leads. Who doesn’t like to feel warm and fuzzy once in a while? I sure do.

Daughter of domestic help gets US State Department scholarship