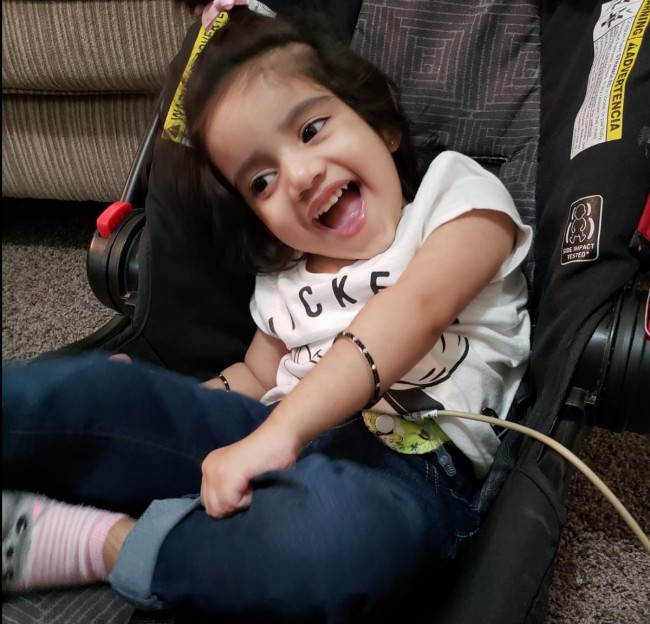 Atlanta, GA, November 9, 2018: “But you said your favorite color was blue yesterday,” says her mom. The quintessential toddler smiles naughtily as she manages to say “llloooo” (yellow).

The first thing that strikes you about Aadya Kiran are her entrancing eyes that speak so much more than words ever could. That’s a blessing for the almost three-year-old, since words, which she was able to mouth before are now fewer and far between. Her movements are restricted, and feeding is mostly though the tube. Life has never been the same for parents Kiran and Anju since the onset and eventual diagnosis of a rare neurodegenerative mitochondrial disease, leigh syndrome, characterized by severely progressive loss of mental and movement abilities (psychomotor regression) and often, terminal. Leigh’s syndrome has no known cure.

“At 28 months, Aadya had an elaborate vocabulary with well over 100 words and would even form sentences of 6-7 words. She had started to lift herself with some support,” says Kavitha Ramachandran, her Atlanta based aunt. After a bout of flu earlier this year, she cannot stand, walk or sit unsupported or crawl. Head tremors make routine tasks like using a straw to drink fraught with difficulty. Running on lower energy than what she needs to get through her day, even a simple cold can be disastrous for her. She recently had a surgery to place a feeding tube to help meet her heightened need for energy. She has braces for her feet, compression vest for her torso and a gait trainer on the way to help her be mobile.

Two-year old Kshiti and her family are facing a similar battle.

“Kshiti loved spicy food. She ate all by herself at 8 months without fussing about the kind of food,” says Divya, her mom. Kshiti was even younger, a little over a year, when she was diagnosed with leigh syndrome. Like Aadya, Kshiti too has been robbed of her abilities to eat, talk, walk and play, within weeks of her diagnosis.

Despite parents Divya and Karthik’s growing concerns, pediatricians in New Jersey categorized Kshiti as a child that failed to thrive. But her parents knew better and the quest to answers led them to Chennai in Jan 2018. After an exhausting array of tests at Apollo Hospitals, then 15-month old Kshiti was diagnosed with leigh’s. The distress continued when they were told at the geneticist’s office, that this was their very first case and that they knew as much about this disease as the parents.

Aadya and Kshiti’s condition is rare. To be precise, 1 in 40,000 rare. What that means is that of the 4 million newborns in the United States in 2015, the number of kids who have the same disorder as them is approximately 100.

Leigh syndrome is one of 7000 conditions under the category of rare diseases (RD). What exactly is a rare disease?

‘There is no single universal definition of a rare disease. There are three elements to the definition as used in various countries – the total number of persons having the disease, its prevalence and non-availability of treatment for the disorder,” says Dr. Harsha Rajasimha, President, Jeeva Informatics Solutions LLC, Co-Director, Rare Diseases Systems Biology Initiative,George Mason University VA and Co-Founder and Board Director, Organization for Rare Diseases India.

‘In the United States, any disease that affects fewer than 200,000 people is defined as rare. This definition was adopted in the year 1983, when Orphan Drug Act (ODA) was adopted for the first time to offer incentives for Biopharmaceutical and medical device companies to invest in research and development of products to help patients with rare diseases. Specifically, the ODA offers tax incentives on 50% of the R&D spend on orphan products, receive 7 years of market exclusivity for their products to help recover the cost of R&D and other incentives. This has spurred enormous interest and ensured progress over the last 35+ years with over 600 orphan drugs approved by FDA during this period,” says Dr. Rajasimha

Of the 350 million people world-wide affected by these 7000 RDs, approximately 30 million have received this diagnosis in the US.

Aadya and Kshiti’s condition is caused by a mutation in their SURF1 gene. “About 80% of RDs are genetic in origin many of them being caused by single gene mutations. 50% of RDs are onset at birth and the rest are late onset. There are also environmental factors, chemical exposure, behavior and lifestyle issues that in some complex combination can cause the disease or its severity,” says Dr. Rajasimha. RDs include inherited cancers, autoimmune disorders, congenital malformations, and infectious diseases amongst others include Hemangiomas, Hirschsprung disease, Gaucher disease, cystic fibrosis, muscular dystrophies and Lysosomal Storage Disorders.

As seen with both Aadya and Kshiti, not cure, even diagnosis of an RD is a complex process, for which the medical and healthcare ecosystem are not geared to tackle. “The average time to diagnose a rare disease in the US and EU is about 7 years. Once diagnosed, only ~7% of these diseases have any FDA approved therapies and most of them are unaffordable to the patients. Majority of the RDs remain without any cures or treatments. About 1000 drugs currently undergoing clinical trials are targeting the rare diseases.” Says Dr. Rajasimha

With no cure for most, it is often required for patient families to turn advocates for the cause, engage, and take an active role as participants in clinical trials and help guide the drug developers with their priorities. “The best thing one can do is to look for existing patient advocacy groups or other support groups on social media and get connected with them. The National Institutes of Health, website has a lot of useful information about most known rare diseases.  The www.clinicaltrials.gov website has a comprehensive list of all past, currently ongoing and upcoming clinical trials in the US and globally. If there is one that the patient matches criteria for, that’s the best hope. If there is no existing patient advocacy group, then, you may want to connect with umbrella rare diseases organizations in the US such as National Organization for rare diseases (NORD), Global Genes, and Genetic Alliance. They offer plenty of toolkits and support to help form newer patient advocacy group for your disease, help connect you with policy makers, other patients and families with that disease, setup a patient registry, advance research by connecting with the expert scientists working on that disease, connect with companies who might invest in finding a cure for your disease,” advices Dr. Rajasimha

Aadya and Kshiti are members of curesurf1 foundation (https://www.curesurf1.org/). In fact, Kshiti’s family was one of the three founding members. The foundation is built on a mission to fund SURF1 gene therapy research at UT Southwestern Medical Center in Dallas,Texas. The hope is that this research project will lead to an FDA approved clinical trial, which would be the first step in finding a cure for this devastating disease.

Are there any success stories with rare diseases? Dr. Rajasimha lists Cystic Fibrosis, where the patient advocacy group CF Foundation teamed up with Vertex pharma to develop a treatment which is helping millions of people, Batten disease, which received recent FDA approval for a treatment developed by efforts of the Taylor King family to work with Abeona therapeutic. “Between 1983 and 2018, there are about 600 orphan products that were approved by the FDA. All of them are success stories,” he adds.

“People shy away as soon as we talk about funding for research. They don’t understand that this is the ONLY hope we have,” says Divya. One of the hardest aspects of dealing with RDs is the lack of awareness. Friends, even families cannot comprehend the daily struggles and the uphill battles these families face, not only deal with specialized physicians visits each day of the week, but to turn advocates and bear the burden of finding a cure.

“Rare disease can happen to anybody. Be considerate to someone suffering from rare disease. Early diagnosis is critical, it is important to track milestones. The best way to help a family member or friends with RDs is take a lead, learn, engage, and participate in clinical research or trials,” says Dr. Rajasimha

Rare Disease Day is observed the last day in February. “Take one day out of your busy life to honor the struggles of patients with rare diseases globally, show that you #CareforRare – participate in events such as #Racefor7 (www.racefor7usa.com),” he adds.

“While it is an everyday fight to keep her stable, the hope and promise of a cure is what keeps us going, even on the toughest days,” appeals Divya. You may watch Kshiti’s story on YouTube on https://www.youtube.com/watch?v=RR2KFqwkOOs. Aadya’s story is available at https://aadyakiran.com/

We must accept finite disappointment, but never lose infinite hope, said Dr. Martin Luther King. Embarking on a journey with destinations unknown, families with rare diseases answer to a higher purpose, holding on to hope that the foundation they are trying to fund reaches monetary and clinical goals. Sometimes heartened by the generosity of strangers, sometimes let down by their own, their odyssey stands testament to their indomitable spirit and courage to draw strength from within. Yes, their conditions are rare, but to thrive as a society, we must care.

Where differently abled girls are worshiped after free corrective surgery

These Families Facing Leigh Syndrome are Working for a Cure - Patient Worthy November 13, 2018 at 3:30 pm

[…] to a story from NRI Pulse, Kiran and Anju have been forced to watch over the past year as their daughter Aadya’s […]