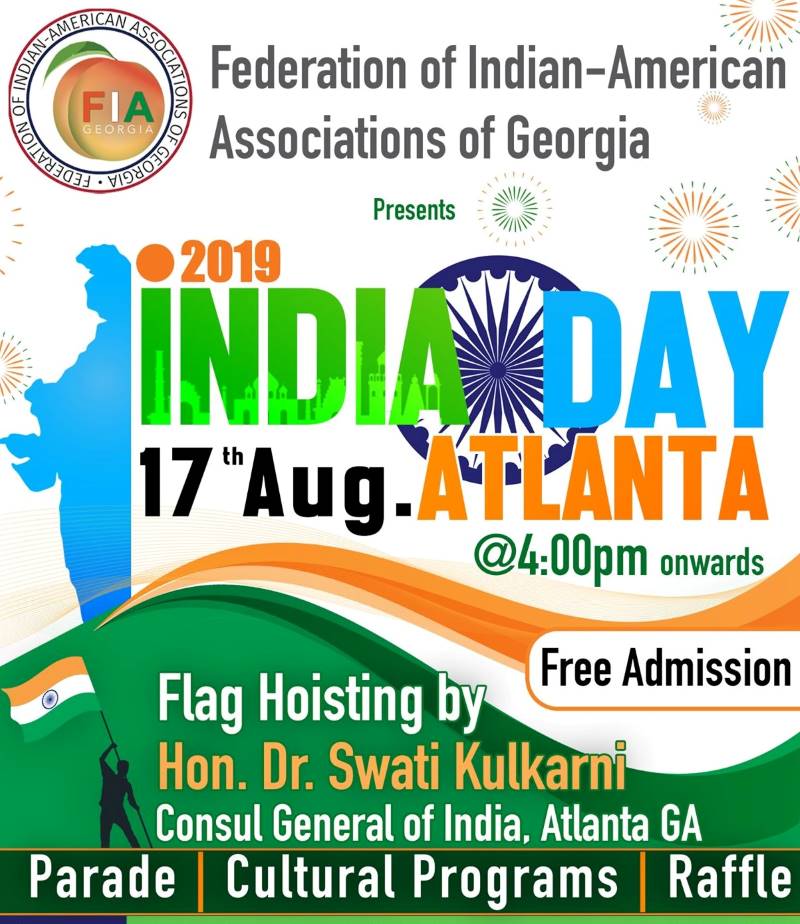 Atlanta, GA, August 2, 2019:  The Federation of Indian-American Associations of Georgia or FIA Georgia, will celebrate the 73rd anniversary of India’s Independence Day as INDIA DAY 2019 on August 17, 2019 at the Gokuldham complex, located in Buford, GA from 4 p.m. to 10 p.m.

As part of the celebration, a variety of activities are planned.

“INDIA DAY 2019 will showcase Indian food, dances, music, a parade, flag hoisting, speeches by dignitaries, exhibits and booths and a lot of fun”, according to Rajeev Menon, Secretary of FIA Georgia.

Among the confirmed speakers include Major General Gagan Deep Bakshi, one of India’s foremost strategic thinkers and a hero of many wars, Consul General of India in Atlanta, Dr. Swati Kulkarni, Chairman of Gwinnett County Board of Commissioners, Charlotte Nash, State Representative Pedro Marin and several other local and state leaders.

“The entire Indian American community of Georgia is coming together to celebrate India’s independence in a big way. We are reaching out to every association in Georgia to be a part of this grand celebration”, said Dr. Vasudev Patel, President of FIA Georgia.

Several thousand Indian Americans from Georgia and neighboring states, along with local residents, are expected to participate in the parade and other activities. The event is free and open to all. Parking is free, plenty and nearby the Gokuldham premises.