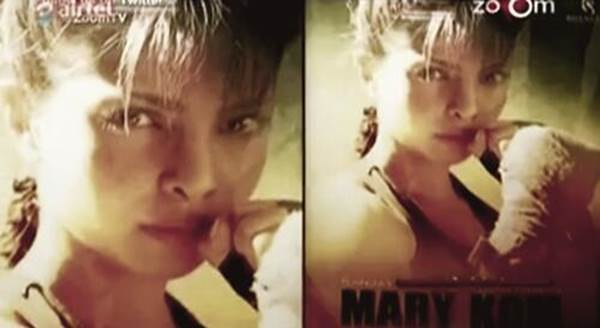 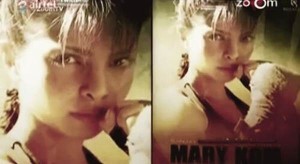 Mumbai, July 15 (IANS) Some are calling her “Raging bulbul”, and some a “chameleon”! National Award winning actress Priyanka Chopra’s fierce avatar in the first look poster of her forthcoming film “Mary Kom”, is for many a testimony to her versatility as a performer.

From choreographer-filmmaker Farah Khan, director Ken Ghosh and acclaimed actor Shreyas Talpade to Bollywood’s young and budding stars Alia Bhatt and Arjun Kapoor – everyone’s raving about the sneak peek in which a muscular looking Priyanka has packed quite a punch.

In the film, which marks Omung Kumar’s debut as a director, Priyanka plays the title role of Olympic medal-winning boxer M.C. Mary Kom. After months of training and hardwork, the first look seems promising.

“@priyankachopra PC I looooove the 1st look!! What a “knockout!”(sorry for bad joke”, posted Farah Khan, while actress Bipasha Basu hailed it too by posting: “@priyankachopra seriously awesome first look of #MaryKom! Loved it! Really looking forward to this one! Good luck darling!”

For Shreyas Talpade, the intensity on Priyanka’s face and stance in the poster reminded him of his own film “Iqbal”.

“The first look of @priyankachopra’s #MaryKomFirstLook is just outstanding. Congrats team. Reminded me of #IQBAL,” he tweeted.

“@priyankachopra damnnn…nailed it…no one’s ever messing with this beauty from Bareilly after the way she packs a punch…#raging bulbul,” tweeted Arjun.

Alia said the film’s “stunning first look”, “makes me want to punch something myself”.

The poster also got a thumbs up from veteran film critic Bhawana Somaaya, who wrote: @priyankachopra pic as #MaryKom is fabulous! I was devastated when she did not sweep all the awards for #Barfii. This time she will!”

Priyanka, who had last won a National Film Award for her performance in “Fashion”, has said that for “Mary Kom”, “Heart. Blood. Sweat. Soul. I’ve given it my all.”

“Over to you guys now,” she said as she shared the poster for her Twitterati.