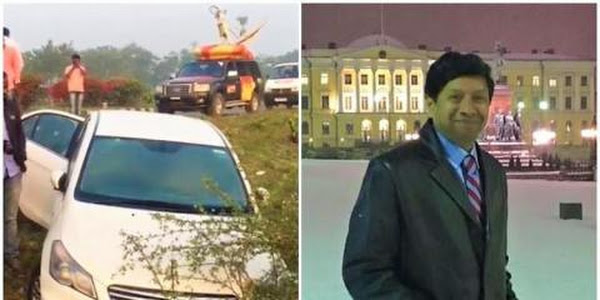 Hyderabad/Vijayawada, Feb 5 (IANS) The Andhra Pradesh Police on Tuesday claimed to have cracked the murder case of Florida-based NRI businessman Chigurupati Jayaram with the arrest of a realtor and his driver, but hours later the victim’s wife approached Telangana Police in Hyderabad and demanded a thorough probe.

Jayaram’s wife Padmashri lodged a complaint with Jubilee Hills police station in Hyderabad, demanding that they investigate the case as Jayaram was murdered in the city.

After submitting a three-page letter to the police, she told reporters that investigations by Hyderabad police alone could bring out the truth.

Earlier, Andhra Pradesh police said Jayaram, who was found dead in his car in Krishna district on Friday, was killed over a money dispute.

Realtor Rakesh Reddy, the main accused, and his driver Srinivas were presented before media persons in Nandigama.

The body of Jayaram (55), who was director of Coastal Bank, was found on the back seat of his car off the national highway near Nandiagama close to Vijayawada on January 31.

After grilling many people including his relatives, police cracked the case. Krishna District’s Superintendent of Police Sarvashresht Tripathi told reporters that Reddy murdered Jayaram as the latter had failed to repay a Rs 4 crore loan.

Jayaram, also a Managing Director of Express TV, a now defunct Telugu channel, had come to Hyderabad from the US a few days ago. As Reddy was demanding the money, he had blocked his mobile number.

The accused contacted Jayaram on WhatsApp from another number, using the display picture of a woman and started chatting with him. ‘She’ asked Jayaram to come alone to a house in Jubilee Hills.A

When the businessman reached there, Reddy and his driver overpowered him and tortured him. The realtor demanded Rs 6 crore including the interest. As Jayaram had only Rs 6 lakh with him, Reddy, in a fit of rage, banged him against a sofa. Jayaram sustained a head injury and died on the spot.

The accused then shifted the body to Jayaram’s car and took it to Krishna district and left it in a field adjoining the national highway to make it appear like an accident. Before shifting the body, Rakesh spoke to two police officials of Hyderabad over phone.

Police gathered clues from the CCTV footage from different toll gates on the Hyderabad-Vijayawada highway. Reddy, who was driving the car, also stopped at a wine shop at Nandigama to buy liquor. Empty liquor bottles were later found in the car along with Jayaram’s body.

Police investigations revealed that Reddy had come into contact with Jayaram after the latter had sought his help to deal with the problem created by lockout in his company on the outskirts of Hyderabad. Rakesh then became friends with Jayaram’s niece Shikha Chowdary.

The SP said their investigations were continuing to find out if any other person or persons were involved in the murder.

Jayaram’s wife told reporters in Hyderabad on Tuesday night that Shikha, instead of rushing to the scene, barged into their house in Jubilee Hills.

“May be,” she replied when asked if Andhra Pradesh police were trying to shield some accused.

In a related development, two police officials in Telangana were transferred following allegations that after killing Jayaram, the accused spoke to them over phone. Assistant Commissioner of Police Malla Reddy and Circle Inspector Srinivasulu were transferred after their names cropped up during the investigations.