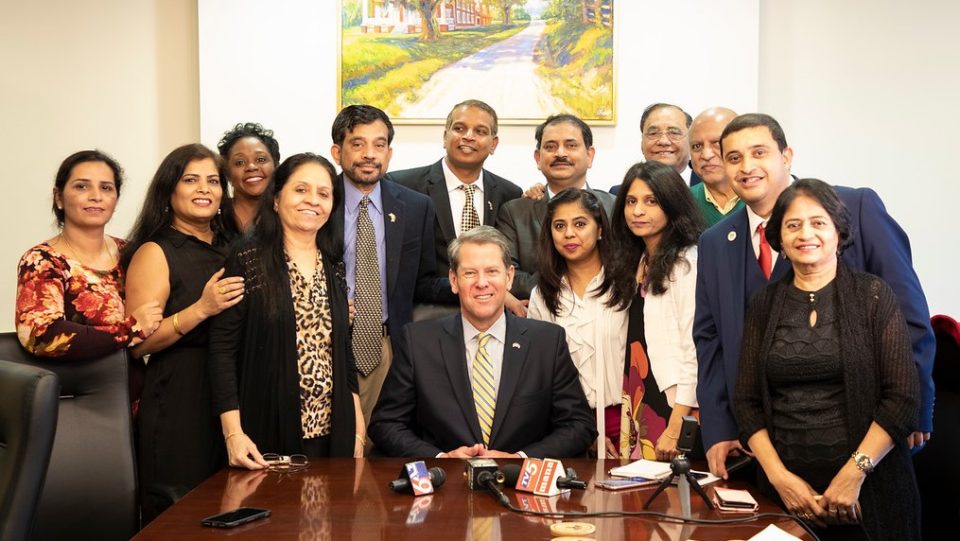 Atlanta, GA, March 4, 2020: “We are the number one state for doing business in the country for the 7th year in a row,” Georgia Governor Brian Kemp said at a press conference held exclusively for Indian-American media on February 4, 2020 at the Capitol building.

Outlining various milestones in different areas since he assumed office in January 2019, Governor Kemp was at his candid best, whether he quipped about traffic conditions or addressed issues including school systems, employment, trade growth, healthcare, small businesses, and foreign investments across Georgia.

“My goal is to connect the Governor’s office and the government officials with Indian media,” said Kartik Bhatt, who currently serves as consumer member for the Georgia Board of Examiners, and also facilitated the exclusive press conference.

Ritesh Desai, who serves of Georgians First Commission, Attorney Neera Bahl, and C.B. Yadav were among other Indian-Americans present at the conference.

Having announced a plan to cut five mandatory standardized tests for Georgia public school students, including four in high school with state Superintendent Richard Woods earlier in the day, Governor Kemp opened his address with the plan details. At present, students between 3rd and 12th grades are required to take 24 standardized tests across a variety of subjects. The federal government requires 17 tests. By getting rid of a 5th grade Social Studies test and four tests at the high school level, Georgia students would only need to take 19 tests between the 3rd grade and the 12th grade.

“We listened to teachers, educators across the board,” said Kemp, about the decision, adding that one of the problems with the high-stakes standardized tests, was that they may not be fully reflective of a student’s performance in the classroom.

“We designed the pay raise to help people in the lower scale,” stated Gov. Kemp, who moved in January to keep one of his most-talked-about campaign promises by proposing a $2,000 pay raise for teachers next year. Lawmakers approved a $3,000 raise last year. He added that it also addresses the issue of teacher retention.

Governor Kemp mentioned the budget that includes 30 million dollars to help teachers by addressing mental health needs and doubling the funding for a program that hires more counselors, adding that the $69 million in school security grants would aid in keeping schools safe.

“We have had great success with the Anti-Gang Task Force,” said Gov. Kemp, adding that the approach was twofold. “We are providing more resources and budget to help law enforcement do what they have been asked to do and the second piece is the legislative part, to put more teeth into the gang statutes.”

Speaking about the Patients First Act that he signed into law, Gov. Kemp said the Act authorizes the Georgia DCH to submit a Section 1115 Medicaid Waiver request to the Centers for Medicare and Medicaid Services and also authorizes the Governor to submit a Section 1332 waiver to identify innovative health insurance coverage solutions for the commercial health insurance marketplace. “We have passed over 20 healthcare bills,” he said, dealing with transparency, regulations and cancer treatment availability for citizens of the state.

“We have the lowest unemployment rate of 3.2%,” stated Gov. Kemp, adding that workforce was still required to keep the economy growing. He cited Amazon which holds promise of 1000 jobs and SK Innovation with plans of a sprawling lithium-ion battery factory in Jackson County, and investment of nearly $1.7 billion that will hire 2,000 employees by 2025. The new factory is expected to produce enough batteries to power 250,000 electric vehicles, per year at full capacity. He also cited Korean manufacturer Enchem Ltd. that will build two new manufacturing plants in Jackson County, Georgia, creating more than 300 jobs investing $61.35 million. “We are already seeing our efforts pay off exponentially.”

“We been in literally all corners of the state talking to small business owners, and now we are starting to move government out of the way of hard working business people,” said Gov Deal about the Georgians First Commission, adding that tax reform was also on the agenda.

“I believe that we need to protect the unborn and the born,” said Gov. Kemp about the Heartbeat bill. With a goal to keep the kids safe and encourage adoption, Gov. Kemp said the adoption tax credit would be raised from $2,000 to $6,000 to help new parents offset costs of adoption and also lower adoption age from 25 to 21 so more qualified Georgians can adopt and more children can be placed in safe homes.

“I have great confidence in our election process,” said Gov. Kemp, adding that the new voting system that prints out paper ballots was highly reliable. Dominion Voting systems print out a paper ballot with a summary of the voter’s selection plus a QR code that is then scanned and stored. The QR code is used to count results on Election Day and the human-readable text summary is used for audits or recounts and the scanner takes a picture of the ballot that could also be used to verify results.