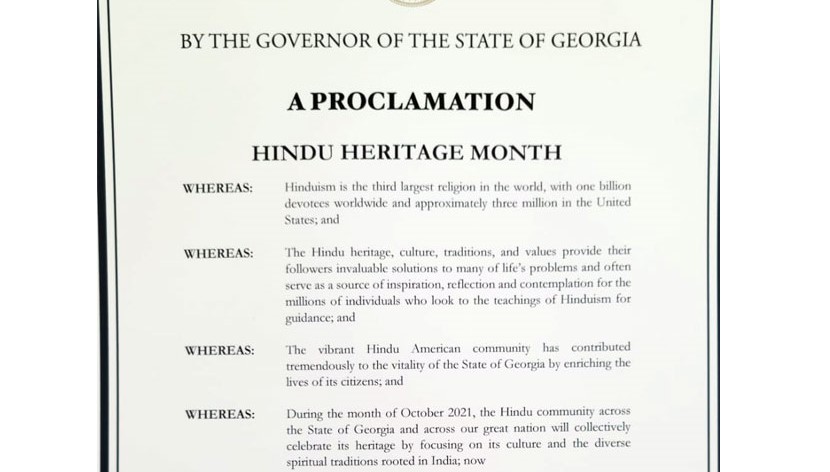 Atlanta, GA, October 29, 2021: Georgia joined several other states in the issue of proclamation declaring October as Hindu Heritage Month (HHM) across the state, thanks to the relentless efforts of Vishwa Hindu Parishad of America (VHPA).  Governor Brian Kemp issued the proclamation in the state of GA on September 21, 2021. The efforts are joined by various organizations including CoHNA (Coalition of Hindus of North America), Hindu Students Council, Hindu SwayamSevak Sangh, Sewa International among several others.

The Inaugural ceremony was held on Oct. 1st with several speakers emphasizing the need for Hindu Heritage Month to spread awareness about Hindus, Hinduism, Festivals and all-inclusive nature inherent in Hinduism.

“Madam speaker i call upon my colleagues to join me in recognizing October as Hindu Heritage Month. To those celebrating, I wish all a joyous celebration of Hindu Heritage Month 2021,” said Rep. Buddy Carter in his speech at the U.S. House, as he read the proclamation.

The proclamation reads “Hinduism is the third largest religion in the world with one billion devotees worldwide and approximately three million devotees in the United States;  The Hindu heritage, culture, traditions and values provide their followers invaluable solutions to many of life’s problems and often serve as a source of inspiration, reflection and contemplation for the millions of individuals who look at the teachings of Hinduism for guidance; The vibrant Hindu American community has contributed tremendously to the vitality of the State of Georgia by enriching the lives of its citizens; During the month of October 2021, the Hindu community across the State of Georgia and our great nation will collectively celebrate its heritage by focusing on its culture and the diverse spiritual traditions rooted in India;”

In his conversation with NRI Pulse, Dr. Ajay Shah, President, VHPA, Jayant Daftardar President, VHPA Atlanta chapter and Rajeev Menon, VP, CoHNA elaborated on the inspiration for HHM and the significance of the proclamation.

“On behalf of the entire VHPA family, it gives us a great pleasure to formally announce month-long celebration of October month as the “Hindu Heritage Month”. Every year in the month of October, Hindus around the world will celebrate this special month,” noted Daftardar.

“We want to share the exuberance of our festivals with the world.  As we celebrate the Hindu Heritage Month, we want to tell the world that Vasudhiva Kutumbakam (entire universe is one family) is the key to harmonious and sustained existence on planet earth. Making Hindu dharma Vishwa Guru for the universal good in the polarized world is the inspiration behind Hindu Heritage Month,” noted Dr. Shah.

“The goal of HHM is to build awareness of our rich, colorful culture and depth of civilizational knowledge to the world and acknowledging the significant contributions made by the Hindu Americans. We have been working on it over the last couple of months with the elected officials from different parts of the US and have received overwhelming support from them. CoHNAs event leads were Shobha Swamy, Richa Gautam,” said Menon.

“In a connected and yet polarized world, Hindus needed a new global festival.  A festival to bring Hindus on a common platform, to establish the place of Hindu dharma as Vishwa Guru (teacher to the world),” Dr. Shah elaborated. The idea he said, was not to preach, coerce and convert people to Hindu faith. “We have made a positive difference in every aspect of human life, from spirituality and culture to art, literature, science, astronomy and medicine. We want to share the joys of yoga, meditation, and Seva Paramo Dharma (selfless service is the highest form of spirituality).”

What is purpose of the proclamation? “As a community, we are thankful to the opportunity America has provided to us.  At the same time, we have enriched America in every aspect of life.  Proclamations demonstrate the acknowledgment of positive contributions made by Hindus to their states and cities.  They also form an important part of community outreach,” stated Dr. Shah.

So, what is a Hindu? “Hindus are all those who believe, practice, or respect the spiritual and religious principles and practices having roots in Bharat. The word Hindu is a civilizational term expressed as Hindu culture or “Sanskriti.” And the word Dharma includes religious practices only as a subset. The World Hindu Council of America (VHPA) welcomes and respects people of non-Indian origin who consider themselves Hindus as defined above,” Dr. Shah explained.

After 27 days, Aryan, Arbaaz and Munmun prepare to go home on bail