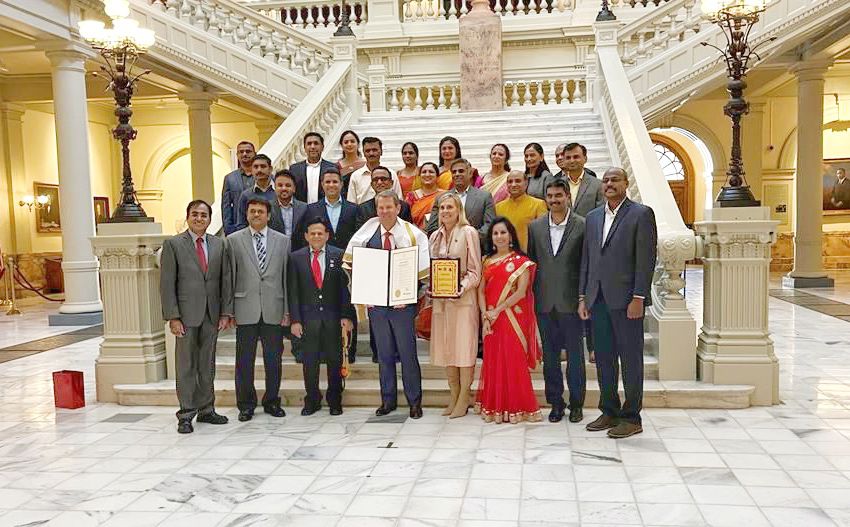 Atlanta, GA, October 29, 2021: Georgia Governor Brian P. Kemp issued a proclamation recognizing November 1, 2021 as Kannada Language and Rajyotsava Day in Georgia on October 27, 2021. He was joined by first lady Marty Kemp on the occasion. Current Board and EC members of Nrupathunga Kannada Koota (NKK), previous leaders and presidents of the organization were present on the occasion.

Kannada language is the official language of the state of Karnataka in southern India. Kannada is the second oldest of the four major Dravidian languages with a literary tradition. The oldest Kannada inscription was discovered at the small community of Halmidi and dates to about 450 CE. The Kannada script evolved from southern varieties of the Ashokan Brahmi script. Three historical stages are recognized: Old Kannada (450–1200 CE), Middle Kannada (1200–1700 CE), and Modern Kannada (1700 CE–present).

Karnataka Rajyotsava also known as Karnataka Formation Day is celebrated on 1 November of every year. This was the day in 1956 when all the Kannada language-speaking regions of South India were merged to form the state of Karnataka.

“This is proud moment for all Kannadigas globally and for all people who have benefited from Karnataka state through education, work, heritage and other miscellaneous reasons. I am so glad that State of GA accepted my request application for this. It was special honor, as first lady also accompanied Governor Kemp. I highly appreciate State of GA and GA Governor for this timely and special proclamation,” said Dr. Anu Bhat, Director, BOD, NKK, who initiated the process on behalf of the organization.

Recognizing contributions of NKK and the Kannada community to the state of GA in enriching its diversity, culture and various other fields, the proclamation read: “Kannada is one of the longest surviving classical languages with the rich literature and etymological formations unique to its language and inscriptions dating back to 450 BCE; The Kannadiga community of Georgia is educating future generations in their language through three local schools in the greater Atlanta area and events organized by Kannada Koota; Kannada language has been recognized with the Biliteracy Seal Outreach in Heritage languages from the Georgia Department of education; November 1 marks the forming of the state of Karnataka in South India by merging all the Kannada language speaking regions; The Kannadiga community of Georgia plays an important role in keeping the Indian heritage and culture intact as well as enriching George’s cultural diversity; Georgia’s Kannadiga community has contributed to the state in the fields of medicine, engineering, research, law, language, culture and tradition as well as enriching Georgia’s economy; The Georgia Kannadiga community will celebrate the rich culture and heritage throughout Kannada language and heritage month with various literacy and cultural programs and competitions.

Hum Do Hamare Do: A frothy family drama that keeps you entertained