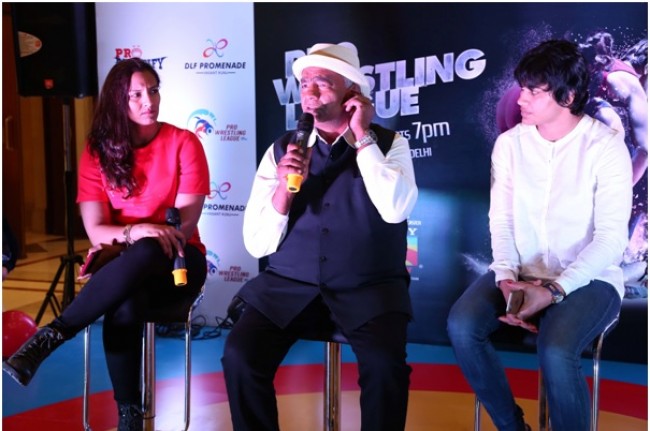 New Delhi, Dec 30 (IANS) They faced opposition from the community when they started wrestling and yet went on to win gold medals for the country. Now, with “Dangal” bringing alive their journey to success, Geeta and Babita Phogat hope that such movies will motivate many Indians to push their daughters into sports.

Even though the Phogat sisters were stars in their own right, “Dangal” has lent them a newfound stardom.

They feel their life has changed a little after the release of the Nitesh Tiwari directorial, which stars Aamir Khan as their father, former national level wrestler Mahavir Singh Phogat of Balali village in Haryana’s Bhiwani district.

“Life has definitely changed now. I can now see sports in India getting the acknowledgment it deserves. People recognise us and it’s a completely different feeling,” Geeta told IANS at a recent meet-and-greet with fans at the DLF Promenade here.

Babita, too, is overjoyed about the critical and commercial success of “Dangal” and hopes it will motivate more parents to urge their children to pursue sports as a career.

“It’s nice to see that your family and your struggle can now be seen by the world through this film. The biggest achievement is that people will know about our struggles and more families will support girls in their houses to participate in sports,” Babita told IANS.

Geeta, 28, won India’s first-ever gold in women’s wrestling (55 kg freestyle category) at the 2010 Commonwealth Games in Delhi. She and Babita, 27, later claimed a bronze medal each in the Women’s World Wrestling Championship in Canada in 2012.

Babita then won a gold medal in the women’s 55 kg freestyle category at the 2014 Commonwealth Games.

Watching “Dangal” — in which Fatima Sana Shaikh and Sanya Malhotra play the contemporary Geeta and Babita, and Zaira Wasim and Suhani Bhatnagar their younger avatars — made the family emotional, but happy too.

“My family was extremely happy when they got to know that a film will be made on our life’s journey,” Geeta told IANS.

She added: “Wrestling was my father’s passion. I never wished to become a wrestler. At the age of 12, my father initiated me into this sport and gradually, I liked it. Then, it got converted into a passion.”

The “Dangal” narrative spans from how Mahavir decides to make wrestlers out of his daughters, and how he puts them through tough training to make his wish come true. However, when they step out in the professional arena — the National Sports Academy — the coach is shown as insecure about how dependant Geeta is on her father and his strategies to win.

The film shows that Mahavir did not watch Geeta’s Commonwealth Games match live because of her coach — did that happen in real life too or was that fictional?

She said: “My father didn’t watch any of my initial matches.”

How did their mother contribute to their success?

“Even she contributed equally as she used to wake up at 4.30 in the morning with us,” said Babita.

Geeta feels the Indian government is now promoting sports better and feels it could be partly due to the many movies being made on sports personalities. (Athlete Milkha Singh and boxer M.C. Mary Kom are among those on whom biopics have been made.)

“I feel with movies promoting sports, it’s working for the benefit of sportspersons and athletes. The government is also working in the best way to promote sports. We hope that people now will get equal and fair treatment in sports and our story inspires people about it,” Geeta concluded.

Oscar nominations out; The White Tiger in race for Adapted Screenplay