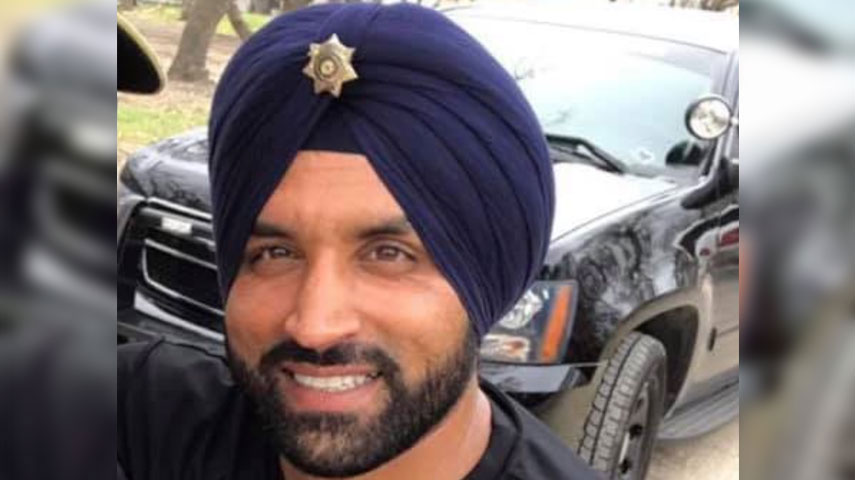 Dhaliwal, 42, was the county’s first Sikh Deputy when he joined the force 10 years ago, and became a national figure after convincing the Department to allow him to wear religious attire and grow a beard while on patrol, reports The Houston Chronicle newspaper.

“He wore the turban, he represented his community with integrity, respect and pride and he was respected by all,” Harris County Sheriff Ed Gonzalez said at a press conference on Friday night.

“It’s the worst day, the worst nightmare for any police executive,” he added.

According to Harris County Sheriff’s Office Maj. Mike Lee, Dhaliwal pulled over a vehicle around 12.45 p.m. on Friday in the 14800 block of Willancy Court in the Cypress area.

Lee said the dashcam video showed that Dhaliwal and the suspect, Robert Solis, 47, still in his car, having a conversation with no sign of confrontation.

A few seconds after Dhaliwal returned to his squad car, the suspect ran up and shot him in the head multiple times, Lee said.

Dhaliwal was airlifted to the hospital, where he died.

Solis was charged late Friday with capital murder in the case, The Houston Chronicle reported.

A woman who was outside gardening heard the shot and saw Solis run to a getaway car.

Lee said the suspect then went to a store nearby. After a brief search, authorities detained Solis, who has a criminal record that includes convictions for aggravated assault with a deadly weapon, aggravated kidnapping and driving while intoxicated.

Dhaliwal, a father of three young children, began his career in law enforcement out of a desire to serve after then-Sheriff Adrian Garcia reached out to strengthen the department’s relationship with the Sikh community after deputies botched a domestic violence call at a Sikh family’s home.

He was also very active at his Gurudwara, and his house of worship held a special ceremony after he became a Deputy.

“He was very, very, very important,” community member Sampuran Singh said. “He was always willing to do what the community needed him to do.”

Houston Mayor Sylvester Turner in a tweet on Friday said that Dhaliwal “represented the diversity and inclusiveness of our community and everything that is good”, while Texas Governor Greg Abbott called the Deputy’s death a “tragic loss”.