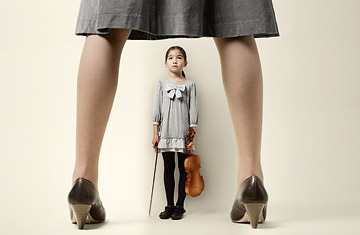 “Asian American parents encourage their children to see themselves as part of an enduring relationship with them,” said Alyssa Fu of Stanford University in the US.

In other words, Asian American children are encouraged to be interdependent, Fu added.

European American children, on the other hand, are encouraged to be independent, the study showed.

Parents encourage their children to see themselves as separate individuals from them and to explore their unique thoughts and experiences.

This key difference between Asian American and European American parenting models has a direct effect on the ability of mothers to motivate their child in an academic setting.

‘Tiger mothers’ (Asian American) are motivating for Asian American children because interdependence allows their children to draw on their connectedness with their mother to maintain their motivation on a difficult task.

European American children, on the other hand, see themselves as independent from their mothers, and are not motivated by their mother’s pressure.

In European American contexts, overcoming failure is a personal project not a group project.

These results have implications beyond the home as well, and may extend to dynamics between students and teachers.

“For example, just as Asian Americans are tuned into their mothers’ expectations, they are also tuned into hierarchy, and pay more attention to the authority of a teacher than European American students,” Fu explained.

The study appeared in the journal Personality and Social Psychology Bulletin.