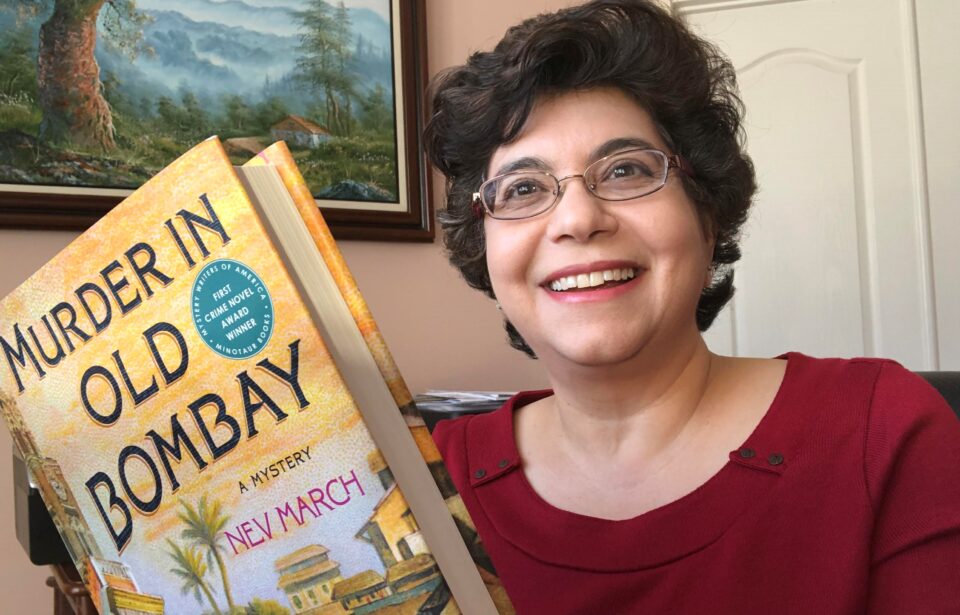 Set in the Bombay of 19th century British India, the book is inspired by the real-life Rajabai Clock Tower mystery that has intrigued generations of Mumbaikars for over a century. On 25 April 1891, two Parsi women, Bachubai and Pherozebai, fell to their death from Rajabai Clock Tower in Bombay University. Bachubai was the wife of Ardeshir Godrej, the founder of Godrej Brothers Co., and Pherozebai was his sister.

This unsolved case is at the core of March’s fictional narrative, around which she weaves together elements of intrigue, action, romance, drama, feminism, and social commentary. The end result is a historical murder mystery that is expansive, detailed, and yet fast-paced.

At the center of the novel is Jim Agnihotri, an Anglo-Indian ex-Army captain, whose curiosity is piqued by the news of the clocktower deaths. He is soon hired by the victims’ family to crack the case. As Captain Agnihotri charges ahead (often literally) to get to the bottom of the mystery, he mingles with the elite Parsi community of the late 19th century Bombay, falls in love with a strong-willed woman, goes on fact-finding adventure trips around India, and even visits his past– all the while courting danger at every step.

In this Q&A with NRI Pulse, March talks about all that went into the creation of Murder in Old Bombay and its characters.

Murder in Old Bombay is based on the Rajabai Clock Tower tragedy. What motivated you to write a book based on this unsolved case?
This unsolved mystery from 130 years ago has become a codeword in my tiny Parsi community. “Remember the Godrej girls” is a warning to women that they are not safe even in daylight. Like Captain Jim in my book, the details of the case puzzled me. Bacha, one of the victims, was the bride of young Ardeshir Godrej, who went on to become a serial entrepreneur and founded what is now the Godrej conglomerate. I wondered how he’d overcome this early trauma. Could he have hired a detective? This led to the genesis of my historical fiction novel, which took on a life of its own.

The ‘secret letter’ is at the center of your novel. You say in the acknowledgments that the letter was inspired by a secret letter in your family. Tell us more!
The secret letter is an 1860s autobiographical poem in Gujarati written by my grandmother’s grandfather Bejonji Ferdonji Jhansiwala, who was a cook (mess man) in the British Indian army. He witnessed the Sepoy Mutiny and its awful aftermath, when both mutineers and civilians were slaughtered. It would have been dangerous to contradict the official version of events during British rule, so our family hid it. By the time I located it, no one I knew could interpret the 150-year-old idioms! When I got it translated in 2006, it gave me the idea for what the two girls might have been hiding, and why they might go to such lengths to protect their family.

Captain James Agnihotri, the Anglo-Indian ex-army detective, is hired by the two female victims’ family to solve the murders. You do mention, that growing up, you were a fan of Sherlock Holmes. Can you talk a little bit about the inspiration for creating your detective?
Holmes was a huge favorite in my family. My mother read Conan Doyle’s stories aloud to us before I was ten! Those intriguing puzzles with unexpected explanations, the surprising methods Holmes uses, strange names, delightful archaic language, complicated sentences, I loved all of it. This book is an homage to Conan-Doyle as well as Kipling.

Captain Jim emerged fully formed, almost on the first page. The first chapter I wrote was chapter 2 where he meets Adi, the grieving widower. Adi was clearly etched in my mind, but I did not understand why Captain Jim was so deferential to him. When I realized Captain Jim was mixed race, Anglo-Indian, that explained a great deal. Writers make choices that we do not always plan. I knew this book would be about the way women are perceived in India, but I didn’t intend how dominant race would become as a theme in my book. It’s given my book additional depth and meaning.

Conan-Doyle’s books were a new sensation so it was logical that Captain Jim would read them and be inspired to follow Holmes’ methods. But Captain Jim is vastly different in temperament–rather than brilliantly cerebral, he’s a man of action, a beat-up soldier who seeks justice for the victims and their families. He gets personally invested, something Holmes would never do. He makes mistakes and gets hurt. He’s real, red-blooded and yup, falls for Diana, the secretive and lively sister of his client!

How much of your book is historical? What kind of research went into writing these parts?
The facts of this case are sourced from the original tragedy; however, I grouped witnesses and eliminated some details. The Framji family is fictitious, as well as Captain Jim. He is based on real life characters Charles Forgett, Thomas Kavanaugh and other officers known to have disguised themselves as Indians for various reasons. I researched stories of Victoria Cross (white) and Order of Merit (Indian) heroes to learn about the skirmishes and battles and researched the Sepoy Mutiny extensively. Cornelia Sorabji’s books described the words used, details of women’s lives and Princely States which were part of India. I studied a number of Princely states, learning how and when they became British protectorates, and also read books by British administrators like James Douglas (Bombay and Western India). Obtaining special permission, I visited the Rajabai Tower (where the two girls died) and went up its narrow stairs (read more at nevmarch.com). To learn more about the princely states’ ambitions, read Romesh Chandra’s Princistan. Research is addictive!

What were the challenges of recreating settings and scenes over a century before our time?
As I helped writer Rusi Sorabji edit his memoir of growing up in Shimla, his descriptions and pictures helped me ‘see’ the roads and homes vividly. As a teen I recall exploring bungalows in Matheran, as well as some older mansions in Bandra. These formed the architecture of Framji mansion, such as the outer balcony where Captain Jim confronts a muscular burglar, the first fight scene in the book.

Throughout I pulled from my memories of Poona (Pune), Matheran, Malabar Hill in Mumbai, and Kashmir. Google maps helped me understand the exact route Captain Jim takes on his travels to Lahore and Pathankot. In fact a friend who grew up in Lahore said she could actually see and smell the street scene I described. There were challenges–some buildings did not exist, for example, the Aga Khan Palace in Poona was still being built in 1892. I researched maps, streets, clubs and hotels of the time. Recreating those scenes of India, writing from Captain Jim’s perspective was a heady experience, just a delight.

I love that your book takes a feminist approach to a murder mystery. Your female characters are strong and self-assured. Can you talk a little bit more about these characters? Is Diana based on anyone you know?
Among the female characters are Mrs. Framji and the Rani of fictitious Ranjpoot, both strong women in their own ways. The most poignant character is Chutki, an abused waif who Captain Jim encounters. He’s eager to get on with tracking down leads, but when confronted with tyranny, he cannot turn away. Chutki was pivotal to the book because she reflects the resilience and courage in the poorest, most crushed individuals of our society.

Diana is a composite of the spunky girls I knew growing up. We climbed trees, found our way up and down a “cliff”, told each other ghost stories and competed in inter-school competitions. Diana is impulsive like some of them, and privileged, like others. Yet she struggles to navigate the expectations of her family and the narrow path of what’s acceptable and proper, like my dear friends did. She’s caring, generous and bold, and yes, she keeps secrets!


Are you planning a series with detective Agnihotri? And if are you, will the next book be based in America?
I’m presently working on an exciting sequel set in 1893 Chicago, where millions visit the World’s Fair, the magical Columbian Exposition celebrating America’s progress. Now employed at a detective agency, Captain Jim is asked to investigate a murder at the fair. When he doesn’t return, plucky Diana suspects foul play and pushes her way into his investigation. Chicago hosts the first Parliament of World Religions that summer, while at the same time the World Convention of Anarchists has assembled. What could possibly go wrong? When this pair of young immigrants discovers a possible plot to blow up the World’s Fair, the stakes rise–everything they care about is at risk, even each other.

What’s your message for Indian-Americans who dream of getting their book published? What’s the one thing about publishing you wish you had known earlier?
There are more opportunities for non-traditional writers now, but the market is also more crowded, with about 1.5 million new book titles published each year. As a debut writer, I knew little about publishing. Even had I known it would take me years to ‘break out’ I’d still have stuck to it because of the joy that writing a good scene brings me. My message to any writer who dreams of getting published is to put in the time and work at it. Writing is not genius, it is a craft. One needs to build a strong story premise and develop the craft to execute it well. Developing craft takes years.

*Veena Rao is the editor-in-chief of NRI Pulse and the author of Purple Lotus.

After I Was Raped: A powerful, compassionate, timely account of five survivors