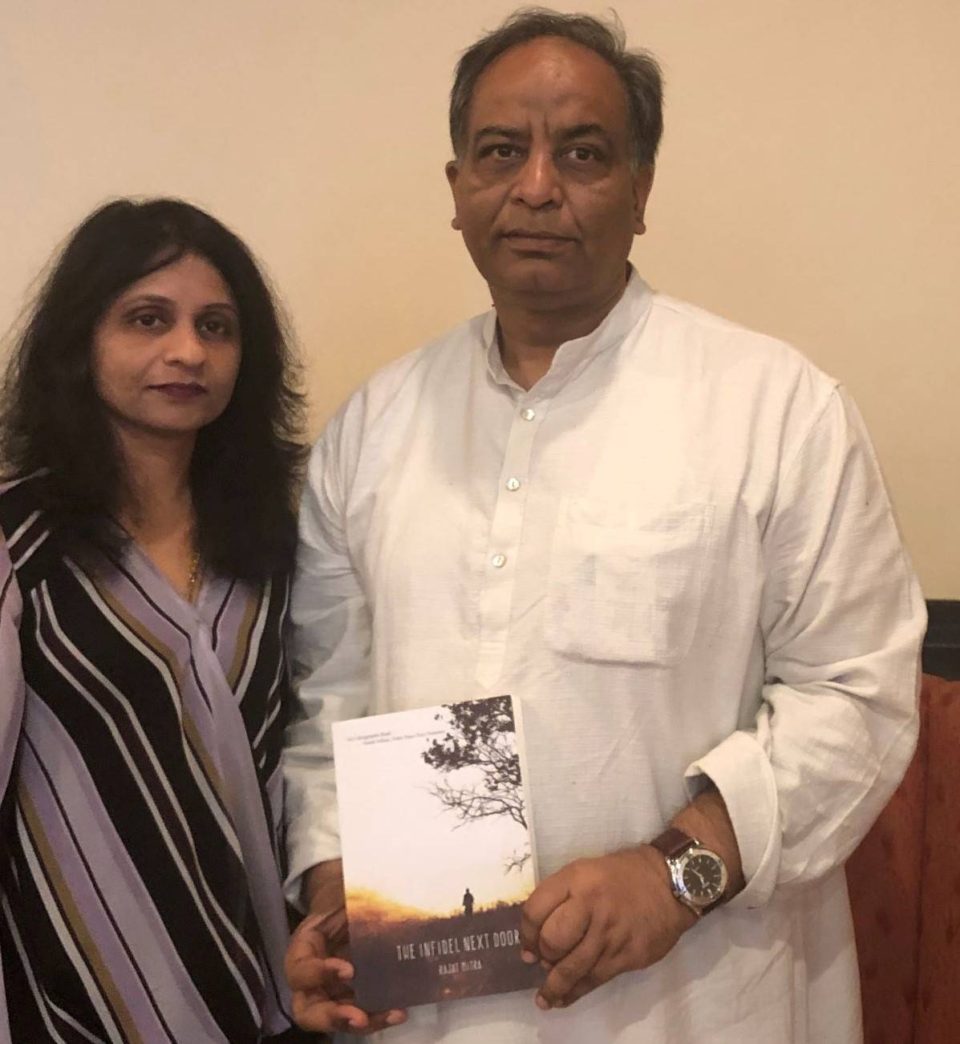 Atlanta, GA, October 10, 2019: “In talking to terrorists and the refugees and hearing their stories about how an entire civilization and way of life came to an end, I decided I wanted to write about it. It was not possible to put it all down in a clinical report, so I used a fictional setting. But the stories, the situations, and the characters, the protagonist and the antagonist are all very real, someone I talked to,” said Dr. Rajat Mitra in his interview with NRI Pulse.

Dr. Mitra, a New Delhi based author and psychologist was in Atlanta for a briefing at the USHA (United States Hindu Alliance) office of his debut novel, “The Infidel Next Door”.  The novel is an exploration of the trials, tribulations and eventual triumph of the Hindu civilization in Kashmir.  The Infidel also dwells deep into the psyche of the people in the valley, such Hindu-Muslim co-existence and the grim picture of hatred and brutality, seeking answers to conflicts passed on through generations.

An Ashoka Fellow, Dr. Mitra holds a masters and PhD in psychology and was recognized by the United Nations for his work for gender justice. He has studied at the Centre for Refugee Trauma, a course by Harvard University. He is involved in de-radicalization programs for Muslim youth arrested by law enforcement agencies on suspicion of terrorism. Dr. Mitra has worked with trauma victims from India, Sri Lanka, Nepal, Philippines, Indonesia and Burma.

“Two particular incidents, rather statements during my line of work, one by a refugee and another by a terrorist inspired me to write this book,” said Dr. Mitra. Recounting his days at the refugee camp, Dr. Mitra said he was talking to one of the last groups that got away.

“The refugee said he called his camp Aurangzeb’s Dream, and it was later that I discovered the story behind it.” Story goes that someone mentioned to Aurangzeb that if he can convert the Kashmiri Pandits to Islam, the whole of India will convert, and he decided to enforce it upon all Kashmiri Hindus. Prominent Kashmiri leader Pundit Kripa Ram sought the support of ninth guru- Guru Teg Bahadur, who decided to sacrifice himself. He went to Aurangzeb. When the Guru refused to convert despite being threatened Aurangzeb decided to kill him in the cruelest of ways but failed to convert him. “His martyrdom saved Hinduism in Kashmir that day,” said Dr. Mitra, adding it was only after he learnt the story that he understood that since the refugee belonged to a group that was the last Hindu family, Aurangzeb’s dream of all Muslim Kashmir had come true.

“During my work in Kashmiri prisons with the terrorists, there was this man, deeply ideological and driven, who said: “I will throw so many stones at Kashmir that the sky of Kashmir will become black”, and that is when I thought about the consequences of having a temple and mosque side by side, like it is, in many places in India, and what would happen if the protagonist and the antagonist lived side by side, what questions would arise, how they perceive religion from their point of view,” elaborated Dr. Mitra. “They eventually find that they can overcome it by their own questioning.”

“The struggle between the protagonist and antagonist in the book also reflects the central conflict between Hinduism and Islam. And my book tries to explore the possibility of co-existence between the two characters rooted in religion, Aditya, a Hindu priest and Anwar, a stone thrower.

“It is a myth that Hindus have not resisted, they have fought for 1000 years to preserve Hinduism. I say, there are two Hinduisms, one of the Gitas, the Vedas, the Upanishads, and the other from 11th century which fought the invaders using resilience, courage and every inner strength that the Hindu religion gives you. There is a certain inherent strength in Hinduism which helps you to gain control of your body, face and counter torture, the way saints detached from the pain when they were tortured though meditation. That is why Hinduism has survived against Islam, while others like Iran and Saudi Arabia failed,” noted Dr. Mitra.

“Ultimately human conscience is higher than any indoctrination, is the message I want to convey through my book,” concluded Dr. Mitra.