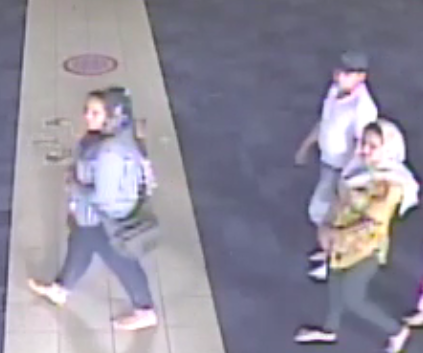 “They first requested one priest to step outside for an interview, which they pretended to record on their cell phone camera. They said the priest did not know sufficient English, so they asked the second priest to join them outside.”

Keshava Murthy had gone home when the burglary took place.

When both priests were outside, the rest of the group, one male and two females, proceeded to take the gold necklaces off the deities. The burglary, which took place around 5.30 pm, was captured on surveillance cameras.

The three women in the group had their head covered. A little girl was accompanying the group.

The priests were stopped from getting back inside the temple during the theft by one of the suspects. It was around 6.30 before the priests noticed the missing ornaments. They called Priest Keshava Murthy, who immediately called the police.

“The whole operation lasted less than 15 minutes,” said Keshava Murthy. “Only gold ornaments were taken. The rest of the jewelry was untouched. It was definitely pre-planned.”

Surveillance video from the previous Saturday shows a family of four- a male, female and two children, take photos of every deity and text them from right inside the temple.

Any information leading to an identification of these individuals, please notify Detective B. O’Haire of the Forsyth County Sheriff’s Office @ 770-781-2222 ext. 3321.

I hope they get caught. The entire Hindu community should show up in the court during the trial and sentencing phase to show our concern and support. We should demand they give back the sacred jewels and pay a hefty fine and jail time. They deserve to be put away for a long time.

When the temple in Minnesota was getting constructed all the deities were in the temple. The temple was vandalized with broken deities. I went to a huge meeting to show support where the local police, politicians etc.. all came. Tension was high and people demanded for justice and to find the culprits. Finally they did it was the act of two teens (19 and 20).
But Hindu Society of Minnesota took a high road of total forgiveness. Kids family showed their remorse. The outcome of that was touching.
These people should be caught but don’t be outraged with the fact they should be punished. That is not what religion teaches. There are other ways too.
http://pluralism.org/news/teens-visit-hindu-temple-they-vandalized-and-find-forgiveness/

Hindus are minority in USA, lately rift is huge, these idiots show off, Americans are hating now than ever before. Trump wants to ban even legal immigration. Wake up call…