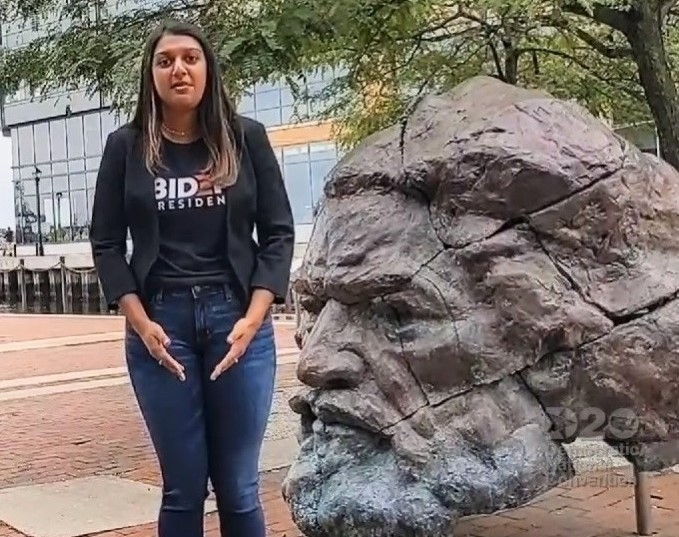 Bianca Shah, the leader of the Joe Biden campaign’s youth outreach to South Asians, declared during the roll call on Tuesday that he will build back the nation better.

“When Joe Biden rebuilds our middle class, he won’t leave anyone behind and will work to end racial discrimination, she said in the roll call segment broadcast on national television that was recorded in front of a statue of Frederick Douglass, the fighter for the abolition of slavery and himself an escaped slave.”

Baltimore City Council President Brandon Scott, who is to be elected mayor in November, gave the roll call with her awarding 119 votes to Biden and one to his rival, Bernie Sanders.

An activist since 15, Shah told IANS that her selection to represent the state shows that “the Biden campaign appreciates the work of young people, young minorities and women like myself and the work I am doing.”

“I was absolutely shocked and absolutely honored as well when I received the call that Biden campaign had chosen me, because in most states it is the elected officials who are performing the roll call,” she said.

“Hopefully I can inspire other young people and young Indians that they can become involved and do exactly what I am doing,” she said.

She and her father, Devang Shah, share a distinction: They were both elected in the party’s primary election to be delegates to the national convention supporting Biden, making a daughter-father team.

Bianca Shah said that she had started in politics by working for the Hillary Clinton campaign when she was 15 and served on the Democratic county committee as a student member and worked as an intern for two Maryland Congressmen.

The victory of President Donald Trump in 2016 devastated her and she decided that she had to redouble her political action for the Democratic Party, Shah said.

She joined the Biden campaign and now leads the South Asian Youth for Biden, organizing outreach events around the country targeting the community, she said.

She said that she decided to work for Biden because “I felt that he was the best candidate in terms of what America needed to recover from, all the mess that Trump has created for so many people around this country.”

As a student at the University of Michigan, she said that she has met people on both sides of the political divide and had conversations with them, which “made me realize that we need a presidential candidate who is going to be active in issues such as health care, immigration, foreign affairs like Biden does.”

He said that the selection of Kamala Harris as the Democratic vice-presidential candidate energized the Indian American community. “She will be a role model for our children,” he said.

Indian Americans turned out at a very high rate to vote for Hillary Clinton in 2016 and with Harris as the vice-presidential candidate, he said that he expected a bigger turnout.

Indian Americans and South Asians could make a difference in the election’s outcome in the swing states, where the margins of victory are very small, Shah said.

For example, he said that “there was a margin of victory of 10,000 in Michigan. If we had voted at the level of the general population, then we would have had Hillary Clinton as the president, not Trump. And that is what we need to do, we need to get out the vote in 2020.”