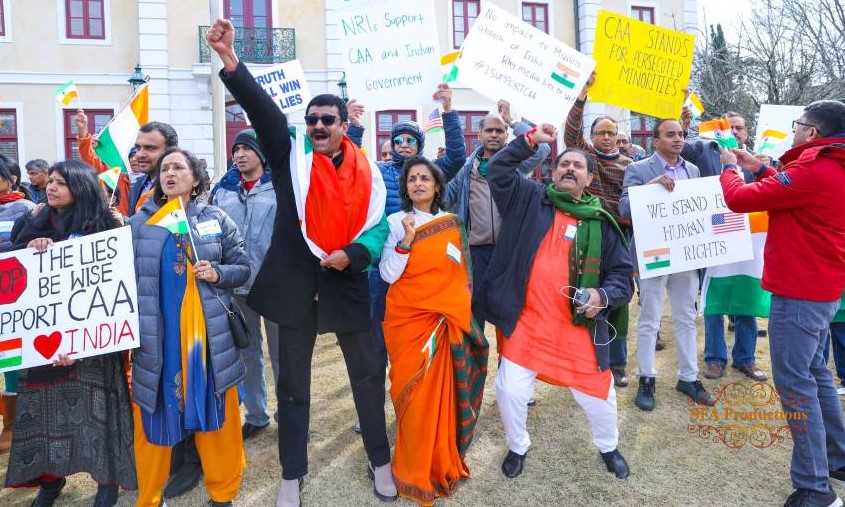 Atlanta, GA, February 6, 2020: Over 200 people of Indian origin assembled at the Consulate General of India in Sandy Springs for a rally in support of the new Citizenship Amendment Act (CAA), passed by the Indian Parliament in December.  The Act grants Indian citizenship to refugees from Hindu, Christian, Sikh, Buddhist and Parsi communities fleeing religious persecution from Pakistan, Afghanistan, and Bangladesh, who entered India on or before December 31, 2014.

The lively crowd assembled in the front lawn of the consulate amidst a sea of Indian and American flags.  They raised rousing cries supporting the CAA interspersed with chants of ‘Bharat Mata ki Jai’ (‘Victory to Mother India!’) and Vande Mataram (‘We bow to the Mother’).  The gathering consisted of participants from across Atlanta’s Indian communities who raised slogans in several Indian languages including Tamil, Malayalam, Kannada, Telugu, Marathi, Gujarati and Hindi. The demonstrators were carrying placards and posters reading ‘CAA inclusive not discriminatory’ and ‘CAA grants asylum to persecuted minorities.’

The support rally was aimed at dismissing the false information and myths about the CAA and to counter the propaganda of hate and lies by the anti-India organizations and media in the US, said Rajeev Menon, one of the organizers of the rally. He also stated that, instead of having a civil debate on the act, some of these organizations are determined to subvert the truth and by doing that, they are ignoring the plight of those people who had already suffered enough in these countries and had to flee for their life.

“We are going to be here to defend India’s freedom, constitution and democratic values whenever they are challenged,” Menon said.

Suresh Krishnamoorthy, one of those present at  the support rally dismissed the protesters as ‘not serious’.  “Look at the language they are using,” he remarked. “They are calling it a genocide and a sign of fascism.  That is an insult to the memory of the victims who were killed in real genocides – The Holocaust, and at the hands of dictators like Pol Pot, Idi Amin and the ethnic cleansing in Bosnia or the genocide in Rwanda.  Comparing a law that grants asylum to persecuted minorities with genocide means they either don’t know their history or they are deliberately being provocative by using inflammatory terms.  Either way, we cannot take them seriously.”

The supporters were met by a small group of anti-CAA protesters. In their midst was Nabilah Islam, who is a contender in the democratic primary for the 7th District of US Congress from Georgia.

The rally concluded with a rendering of the Indian national anthem by the participants.

A celebration of culture, tradition & food At Sankranti restaurant