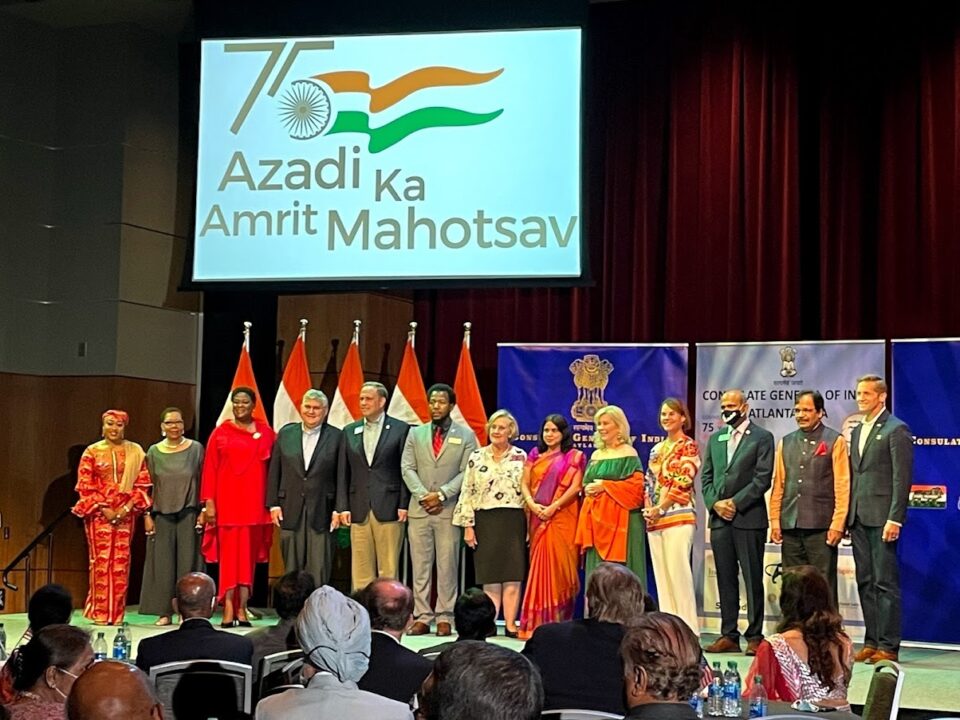 Sandy Springs, GA, August 15, 2021: The Consulate General of India in Atlanta hosted a symbolic and diverse celebration for the 75th Independence Day. Full of colors and performances, the celebration marked the fourth year in a row that the consulate has honored this special day. Although the past year was a small gathering in the face of the COVID-19 pandemic, increased precautions and vaccinations allowed this celebration to really showcase the full scale of the Indian-American community in Georgia.

Among the guests were several members of Georgia’s House of Representatives and Senate, Representatives from Nigeria, doctors from the Georgia Composite Medical Board, Bollywood actress Pooja Batra and Indian tennis player Prajnesh Gunneswaran.

As guests walked into Sandy Springs Performing Arts Center, they were greeted with a video from Dr. Subrahmanyam Jaishankar, the Minister of External Affairs of the Government of India. The video consisted of a speech from Dr. Jaishankar and several dance, vocalist, and instrumental performances that showcased traditional dances from all over India. Performances of Bharatanatyam, Kathak, and Bhangra were interposed with vocalists Arushi Asgaonkar and Harpreet singing Indian classics like “Saraswati Vandana.”

Dr. Jaishankar spoke about the importance of India’s outreach globally and the historical significance of the day. “We pay homage to those whose sacrifices make our tomorrow possible,” he stated. “Let us celebrate our efforts towards a colorful democracy.”

Soon after, the screens went blank and the podium lit up. Consul Asim Kumar, Head of the Chancery, introduced the day’s events by welcoming all of the esteemed dignitaries. Then, all the guests rose for instrumental versions of both “Jana Gana Mana” and “The Star-Spangled Banner” as images highlighting the architecture, natural beauty, and citizens of both countries decorated the screens.

Afterward, the Consul General, Dr. Swati Kulkarni, came out to speak about the accomplishments of India in the past years.

“Dignitaries, ladies and gentlemen, it is my proud privilege to welcome you all today on this momentous occasion of our 75th independence day, a landmark day in our national calendar,” she welcomed.

“India, with its strong, vibrant, and secular democracy, with its dynamic economy, has rightfully earned respect as a responsible and trustworthy nation,” she declared.

Afterwards, Dr. Kulkarni spoke about how India had fought valiantly through the COVID-19 pandemic and overcome crises of public health and economy to come back stronger than ever. She elaborated on how over 500,000,000 Indians had been vaccinated, and how even more would continue.

She continued to summarize sections of the Address to the Nation by the President of India, which was delivered on the eve of Independence Day.

“Our nation, like many others, suffered great injustices and tyranny under foreign rule,” she emphasized. “What distinguishes India, however, is that the character of our national movement, built by Mahatma Gandhi, was based on principles of truth and nonviolence.”

Dr. Kulkarni also spoke about India’s amazing performance in the 2021 Tokyo Olympics. “India has won the highest number of medals in its 121 years of participation in the Olympics,” she stated proudly. “I urge every family to support the endeavors of many such daughters [who won the medals], and provide opportunities for their daughters also to explore avenues of growth.”

Dr. Kulkarni continued to speak about the outreach and effort that their Atlanta Consulate has done in the past years. She elaborated on their efforts to help Indians stuck overseas during the pandemic, and how they helped hundreds of Indians make their way back home while providing them food and shelter.

In addition, the Consulate General also discussed her collaboration with several other officials in the United States Government. From Governor Brian Kemp and Senator Raphael Warnock to President Jimmy Carter, Dr. Kulkarni showed images of her working with officials to ensure better representation for Indian-Americans across the country.

“Today’s dawn has brought a new spirit, a new zeal, a new enthusiasm with it. Team India, with its 1.3 billion countrymen, as partners in development, is moving in the right direction to attain 1.3 billion aspirations and 1.3 billion dreams. We, the people, will have to work together without losing a single moment. Thank you, and Jai Hind,” she concluded to a round of applause.

After Dr. Kulkarni’s speech, Consul Kumar introduced several cultural dances that amazed the guests with their colorful and beautiful routines. The girls of Bharatkala Natya Academy performed first with a routine called “Footnotes,” a classical fusion dance consisting of fast and intricate footwork.

The final two performances gave several guests goosebumps as the girls from Bharatkala rejoined the stage to beautifully perform “Vande Mataram,” the national song of India. They held up colorful posters showcasing the diversity of thought and religions that make up India.

The last performance was by Deeksha School of Performing Arts, a combination of a dance routine called “Rhythm speaks” followed by “Jana Gana Mana.” As the entire room stood to honor the national anthem one last time, the girls on stage delivered a beautifully choreographed and synchronous performance.

As the event ended, several of the night’s esteemed guests came to the stage to speak a few words and take pictures.

The night winded down with several guests making their way out to the entry area, which was decked out with cuisines that represented all regions of India. As the guests enjoyed the hearty meal, the celebration of Independence came to a close; however, the pride in the nation remained palpable throughout.