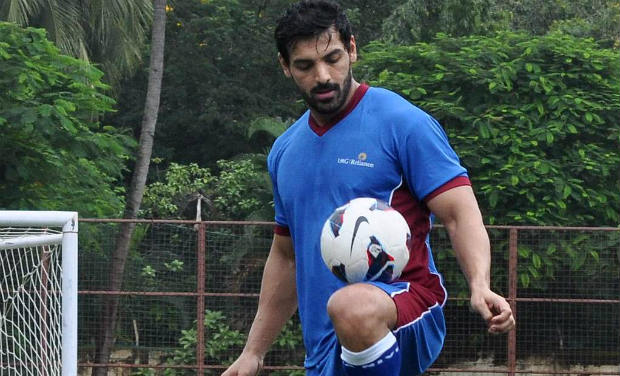 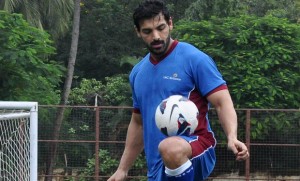 New Delhi, June 6 (IANS) Football fanatic John Abraham is ready and steady to make the country “live the magic” of the 2014 FIFA World Cup. The actor-producer, who is doing a film based on the sport and has even invested in a football franchise, believes the fever for the game will scale new heights once Indian football finds its “hero”.
“One sporting hero can totally change the fabric of a sport in a country. For example, in tennis, it was Sania Mirza, or for badminton, a Saina Nehwal and much before her, Prakash Padukone…look at what Tiger Woods did to golf in the world. I think Indian football requires that one hero,” John told IANS over the phone from Mumbai.
“Bhaichung Bhutia nearly made it there, but we need one hero. The minute we get that hero, watch football change in this country. It will take time, but it will change,” said the multi-faceted talent, who has been roped in by sports and entertainment channel Sony SIX as the 2014 FIFA World Cup brand ambassador in India.
John grew up watching Argentine footballer Diego Maradona’s skilful play thanks to his father, who woke him up early morning to catch up on football matches. He started playing himself, so much so that he now says, “I would have played for India, but I had to make a choice between football and MBA.”
But here, at 41, he is living his childhood passion – via different ways.
Apart from widely promoting the World Cup here, he has bought the Guwahati franchise of the Indian Super League (ISL) and his home production “1911”, to be directed by Shoojit Sircar, will see him reprise late Indian footballer Sibdas Bhaduri on the big screen. It’s football, football everywhere!
“Yes right…so much of football happening! My production officer and my production partner are wondering whether this (my office) is a production office or a football office,” John quipped.
But on a serious note, John is all for efforts on the part of his celebrity clan’s to bring eyeballs to any sport, “be it kabaddi, football, badminton, hockey, golf or boxing. I wish to promote so much more”.
As for the World Cup which gets underway in Brazil June 12, John himself will be living the magic of the games via the television and a studio, where he’ll get to analyse the matches for the viewers with football icons such as Peter Crouch, Robbie Fowler, Peter Shilton, Mikael Silvestre, Ellyse Perry and Sunil Chhetri.
“Café Rio” and “Football Extraaa” are the two shows that Sony SIX has planned to dole out during the matches to inculcate prime time football viewing in the country.
Who’s John backing?
“Well, I need to study the teams very carefully to be honest. but if I had to put a little bit of money on three or four teams, I would go with Germany and Argentina but I wouldn’t rule out Spain and maybe Brazil,” he said after much deliberation.
And who’s his all-time favorite?
“No one plays football like the Brazilians do! When they play it, it’s like poetry in motion. Besides, this time, the World Cup is in the Mecca of footballing – so, watching Brazilians play would be great,” he said, adding that if his “duties” allow him a three-day break, he would love to fly off to Brazil to catch up on at least a few matches live.
Now, that’s the spirit!