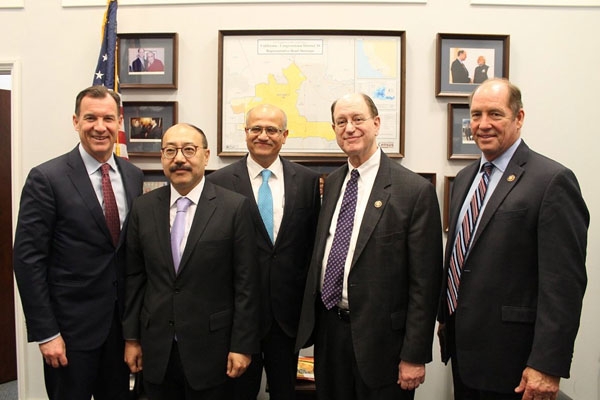 New York, March 13 (IANS) The detention of Indian students by the US immigration authorities came up during Indian Foreign Secretary Vijay Gokhale’s meeting with Congressional leaders, according to a participant.

Representative Tom Suozzi tweeted that during the Monday meeting they discussed immigration issues and that he himself “sought everyone’s assistance regarding the Telugu students detained” by immigration authorities.

The meeting took place in the Washington office of Brad Sherman, a Democrat, who is the chairman of the House of Representatives Subcommittee on Asia, the Pacific and Non-Proliferation. The panel’s Ranking Republican Member Ted Yoho was also present.

In February, immigration officials detained 129 students, most of them from Telegana and Andhra Pradesh, who had enrolled in a fake university that officials had created in a sting operation against misuse of visas.

Officials allege that they had enrolled in the institution knowing that it did not hold classes but was used only to facilitate visas.

Suozzi, a Democrat with a large number of Indian-Americans in his New York constituency, also tweeted: “The relationship between the US and India is one of the most important relationships the US (will) have over the next 50 years.”

Sherman tweeted that they discussed the US role in India-Pakistan relations and US-India trade.

On Tuesday, Gokhale attended the India-US Strategic Dialogue with David Hale, the Under Secretary of State for Political Affairs in Washington.

He is scheduled to continue the dialogue on Wednesday with Andrea Thompson, the Under Secretary of State for for Arms Control and International Security Affairs.

State Department Deputy Spokesperson Robert Palladino said he was also scheduled to have meetings at the White House and the Department of Defence.